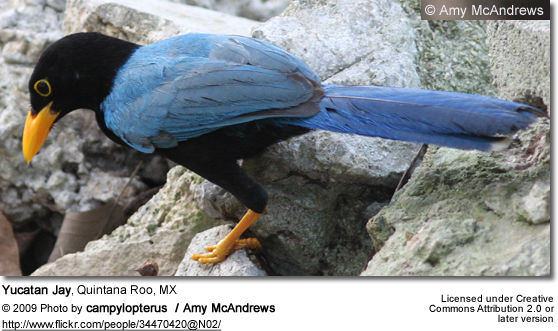 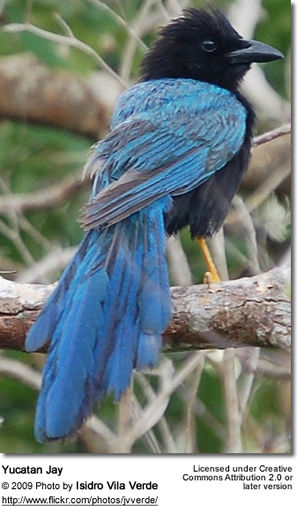 The Yucatán Jays (Cyanocorax yucatanicus) are endemic to southern Mexico and northern Central America, where they have an extensive range and a large, increasing population.

Yucatan Jays occur naturally in Southern Mexico, Belize and Guatemala. Within their range, they are resident (nonmigratory).

In Belize, where they are less common, they are found in dense pine ridges and the swampy regions bordering them.

The head, neck, chest and abdomen are black. The wings, mantle and tail are blue.

The undertail coverts (feathers) are a dusky blue. The back is either bright deep azure / sky blue or deep turquoise blue. The tail is a deeper blue, nearly cobalt, and the flight feathers have a greenish tint.

They have black bills and yellow legs. The eyes (irises) are dark black-brown in adults as well as juveniles.

First-year juveniles can be identified by their white heads and bodies. Their wings and tail are greyish-blue with white-tipped tail feathers (except for the middle pair). The bill and feet are pale yellow with pink flesh tones. The inside of the mouth is white. In the second year, they molt into the black head and body plumage of the adult. Their bare parts are yellow.

Second-year juveniles look similar to adults, except for the yellow bill and yellow eye rings, which turn black when they are about four years old. They also retain the white-tipped tail feathers until they molt into the final adult plumage.

Jucatan Jays resemble the San Blas Jays (Cyanocorax sanblasianus) and the Purplish-backed Jays (Cyanocorax beecheii); however, confusion is unlikely as they don't share a natural range. The latter can be differentiated by their yellow eyes (irises). Yucatan Jays feed in loose flocks either high in the canopy or near the ground. They adapt their diets to take advantage of seasonally available plant and animal material.

Their diet consists of seeds, fruits and animal matter (such as spiders, caterpillars, spiders, ants, slugs and larvae). They have been observed following army ants and capturing invertebrates flushed by the ants. They will also scavenge tables.

Yucatan Jays breed in cooperative groups consisting of less than 10 birds. Such a group usually includes one breeding pair and younger birds (1 and 2-year olds) that assist the breeding pair in raising the young.

A full clutch consists of 4 - 6 eggs.These eggs are mottled pale to medium pinkish-buff with reddish-buff speckles.

The young and eggs are preyed on by tree squirrels and snakes. Adults will defend their nests and their young by making alarm calls in response to threats and attempting to ward off attackers through pecking and striking.

Yucatan Jays have various vocalizations. One is a simple harsh clatter or rattle; another is a sharp "pip" followed by a series of high-pitched clear notes resembling those of a titmouse. Davis described it in 1957 as "Chea-chea-chea-chea-chea" which is sometimes preceded by a loud nasal "eyah".