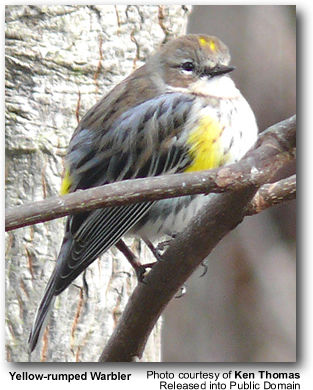 Since 1973, American Ornithological Union has elected to merge these passerine birds as one species. These two forms were apparently separated by glaciation during the last ice age, and developed distinguishing physical characteristics. When it was shown however that they were able to interbreed, they no longer qualified to be considered as separate species. The reluctance of some North American birdwatchers to accept A.O.U.'s change in speciation may stem from the changes in their "life lists". Technically, what before may have justifiably counted for two entries should perhaps now be cut back to one.

The Yellow-rumped Warbler breeds from eastern North America west to the Pacific, and southward from there into parts of Mexico. It is a migratory bird which travels to Central America and the Caribbean for winters. Among warblers it is one of the last to leave North America in the fall, and among the first to return. It is an occasional vagrant to the British Isles and Iceland.

In summers, males of both forms have streaked backs of black on slate blue, white wing patches, a streaked breast, and conspicuous yellow patches on the crown, flank, and rump. Audubon's Warbler also sports a yellow throat patch, while the Myrtle Warbler has a white throat and eye stripe, and a contrasting black cheek patch. Females of both forms are more dull, with brown streaking front and back, but still have noticeable yellow rumps. Goldman's Warbler, of Guatemala, resembles Audubon's but has a white lower border to the yellow throat and otherwise darker plumage; males replace the slate blue of Audubon's with black.

These birds are primarily insectivorous, although when bugs are scarce, the Myrtle Warbler also enjoys eating the wax-myrtle berries which gave it its name. They often flit, flycatcher-like, out from their perches in short loops, in search of insects.

They nest in coniferous and mixed woodlands, and lay 4-5 eggs in a cup-shaped nest. 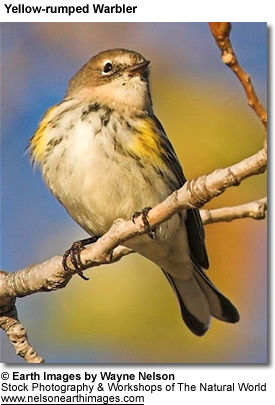 The Yellow-rumped has a trill-like song of 4-7 syllables (tyew-tyew-tyew-tyew,tew-tew-tew) and an occasional check or chip call note.