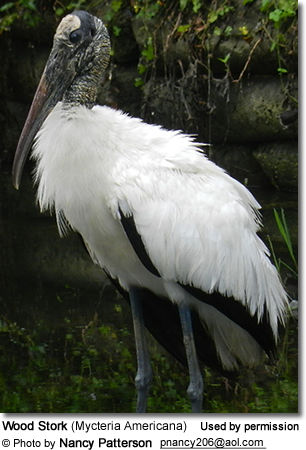 It can be recognized by its large strong curved beak and white feathers with black trim on the wings, and almost featherless head. 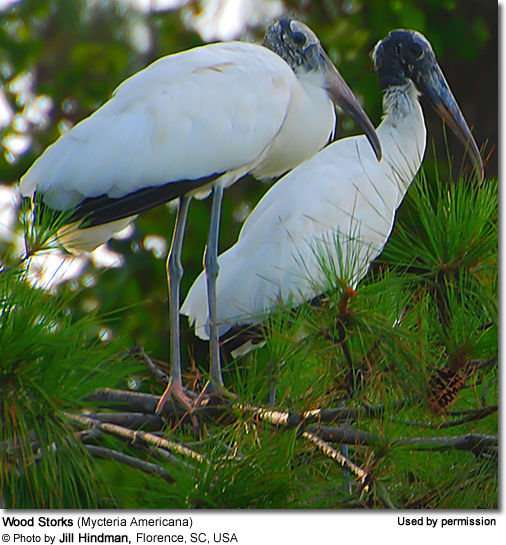 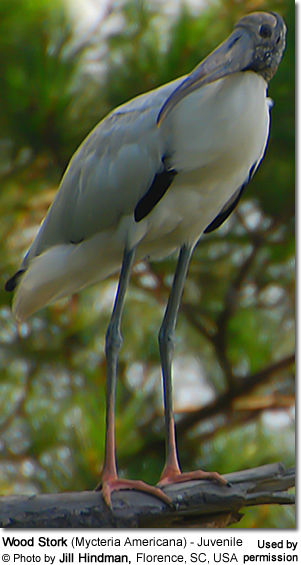 In the 1930’s there were 60,000 birds in the United States and today it is estimated to be around 10,000 wood storks.  Due to this decline, caused mostly by loss of habitat and habitat disruption, which has caused lower reproduction rates, they are on the federally endangered species list.  To examine the Wood stork, one can see how this happened.

It would be difficult to mistake the wood stork for any other wading bird.  It is about three and a half feet tall with a wing span of at least five feet.  Its weight varies from five to seven pounds with the males being larger is size.

The bird is covered with white feathers with the exception of the tail and the primary flight feathers which are black.  The long naked black legs and light colored feet blend with naked gray upper neck and head area.  The neck and head have a wrinkled scaly appearance because of  modified feathers.  A heavy long beak (yellow as a juvenile, and black as an adult) is massive close to the head and turns down toward the body.

The wood stork can easily be recognized in flight by its size and the white color trimmed in black.  When it flies, it extends its head and feet, and looks like it is headed for a awkward crash.  Completely at grace as they walk on land or in shallow water, they slowly lift high each leg as they step closing the toes (done so it will not entangle its feet in the underwater plant material) and then again extending them as they place the foot on the ground. 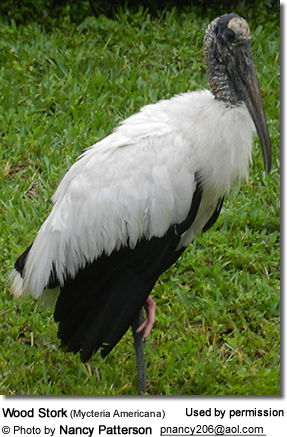 Wood storks use the massive beak as their source of food gathering.  The feed in water no deeper than their beak and catch a variety of things in their bill which they then toss their head back and swallow.  This technique is known as “grope feeding”.  This because the stork does not use vision in food collection, but instead does everything by touch.  The reflex of the bill after it touches food is thought to be the fast of any reflex in the vertebrate world. Their diet has been known to consist of fish, crayfish, salamanders, tadpoles , shrimp, frogs, insects and an occasional baby gator.

Wood storks also use their feet to stir the bottom when collecting food.  This technique startles the prey from the vegetation into the beak. Some think that the water turbulence caused by this action simulates the water movement of a “feeding frenzy”, and can attract fish to become prey.  Also observed, is the “wing flicking” as it is called, whereby the wings are opened and held so over the water, to scare fish.

Wood storks are big eaters.  During a breeding season, it is estimated that a pair of wood storks and their young, eat about 440 pounds of food (from courtship to fledging, usually about 60 days). 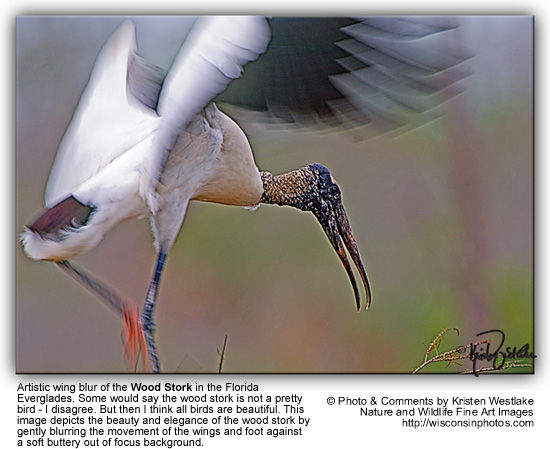 Courtship for the wood stork begins when the male picks his spot for the nest.  He will then challenge all who come close (this is done because there is no visible difference between male and female).  If a male approaches he reaches his bill and does loud bill clapping to intimidate the intruder.  If it is a female, she edges closer with her bill open and wings spread.  The male shows disinterest, and will play with branches or preen.  Once the male finds the female attractive and agreeable, both birds then raise and lower their heads with bill agape……a typical wood stork greeting.  I once had a wood stork walk up to me and the camera, to close to photograph, an greet me in that fashion.  He /she  followed me all day.

Once the pair agree upon the exact spot for the nest, the displays become more aggressive.  Bill clapping of the male and using his bill to strike the bill of the female makes a distinctive noise in the rookery.  Copulation takes place once the pair bond is formed and may occur several times during the nest building.

The nest is built in three days.  The male goes to collect small green twigs from the tree tops and brings them to the female to construct the nest.  Then the male collects green leaves or cypress twig to line the nest (this serves as insulation for the chicks).

Usually three cream colored eggs are laid at about two day intervals.  Once the second egg is laid incubation occurs, and last from 28 to 32 days.  Hatching also occurs in the same manner, thus there is a dominant chick in the nest  (in case of food shortage usually only on survives).

The first two weeks of life are the hardest for the chicks.  They can be prey for crows or unpaired wood storks.  There is also the heat and weather that can act adversely on the newly hatched chick.  Thus the parents share the responsibility of food collection.  Food is carried back to the nest in the throat, and regurgitated for the babies to consume.

Hatched at two ounces and covered with sparse white down which become wooly by ten days, they grow to three pounds by the end of three weeks.  At this time the can already defend themselves.  Depending upon the food supply the wood stork chicks fledge at about 60 to 65 days, and no one knows for sure what happens at this stage of their life.  Young birds know instinctively how to hunt.  Young birds maintain feathers on their head and their yellowish beaks until are about three years old.  They become sexually mature at the fourth summer.

There is much more to the wood stork than can be told here.  The intra species conflict is amazing to watch, and their food consumption rituals is also unbelievable.  Then too, look at their feeding technique, how much they consume ( how many burgers would that be for one our size?).

One thing is for certain, the wood stork is so attuned with the wetland habitat life cycles that they are the recognized indicator of the health of the wetlands themselves.  The disappearance of the wood stork would signal loss of a very valuable area of our tropical coastal wetlands.

A sampling of his credits include Nature Photographer Magazine, many state DNR magazines including covers, Tropical Fish Hobbyist, Journal of Health and Healing, several calendars and many brochures. 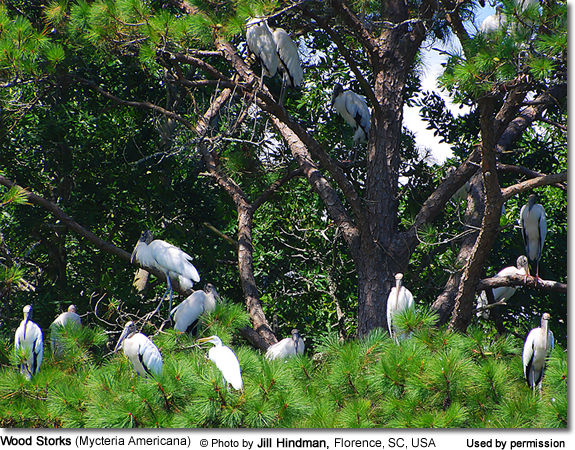