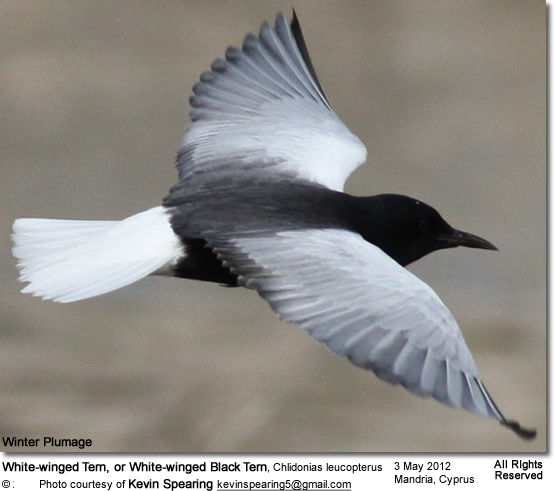 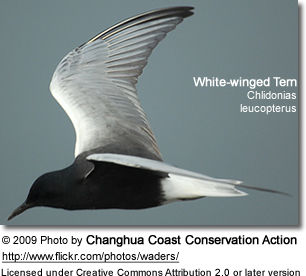 The White-winged Terns or White-winged Black Terns (Chlidonias leucopterus) are small terns with an extensive range that stretches across large parts of Europe east to Asia and Australia.

They are generally found in or near bodies of fresh water. 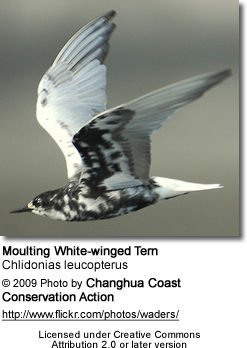 The White-winged Tern's extensive breeding range extends from central and eastern Europe (including northwestern Italy) through Siberia, Transbaikal, and northern Mongolia as far as Amurland in the Russian Far East. They are also known to breed in New Zealand.

They are scarce vagrants in North America, where they are mostly found along the Atlantic coast, but a few records of them exist on the Pacific coast and inland in the Great Lakes area.

They occur in fresh marshes and lakes from sea level up to around 6,500 feet (~ 2,000 meters). During the migration, they are found in coastal waters. During the winter, they inhabit rocky coasts, rivers, rice fields, lagoons and dry farmland. 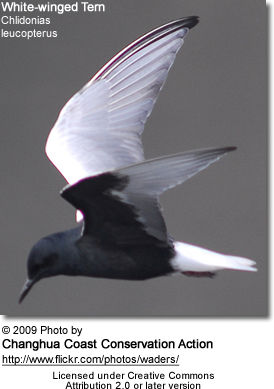 Flight: Their wing-beats are shallow and leisurely.

Immatures are similar in appearance to non-breeding adults, but can be identified by their entirely black cap.

Birds in winter plumage resemble the larger and longer-billed Whiskered Tern; but the White-winged Tern can be identified by the white rump which contrasts with the rest of the body.

The White-winged Terns have been recorded to hybridize with Black Terns in Sweden, Netherlands and possibly England (Chew Valley Lake). These birds show mixed characters of the two species, specifically a combination of the dark back of the White-winged Black and the dark patches on the chest of the Black Tern. 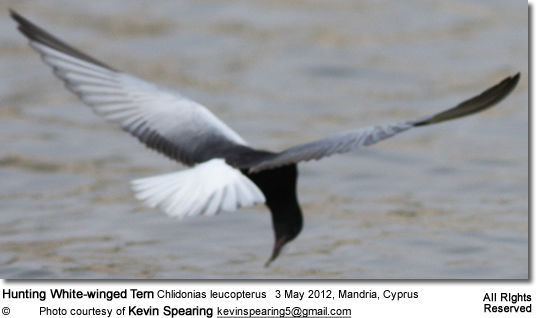 White-winged Terns mostly feed on insects and small fish, as well as frogs and other aquatic critters. They usually fly slowly over water to pick prey off the surface of water or in flight, or they make take it from vegetation. They don't dive for food.

White-winged Terns typically breed between April and August in small colonies together with about 20 to 40 other pairs. Nesting usually occurs in freshwater marshes.

The shallow cup nest is constructed out of small reed stems and other plant material, and typically placed on floating vegetation in a marsh or on the ground very close to water.

The average clutch consists of 2 - 4 smooth, slightly glossy eggs which are incubated for 18 - 22 days to hatching.

The White-winged Terms have been recorded to hybridize with Black Terns in Sweden, Netherlands and possibly England (Chew Valley Lake). 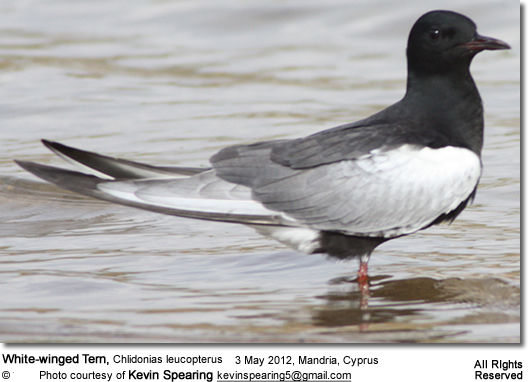