The White-tailed or Guerrero Hummingbirds (Eupherusa poliocerca) are only found in southern Mexico, where they have a small range. They were named for their distinctive white tails, which distinguish them from other hummingbirds within their range. They are sometimes considered a subspecies of the more widespread Stripe-tailed Hummingbird.

White-tailed Hummingbirds are extremely localized on the Pacific slope of the Sierra Madre del Sur in Guerrero and western Oaxaca in south-west Mexico. These hummingbirds are locally fairly common to common; however, their numbers appear to be decreasing due to clearance and degradation of their montane forest habitats. This species is now considered "vulnerable."

They are most common in Guerrero - from near Omiltemi and along the Atoyac de Alvarez-Teotepec Road. They are also found further west inland from the city of Zihuatanejo. In Oaxaca, they were only sighted near Putla de Guerrero in the Sierra Yucuyacua. 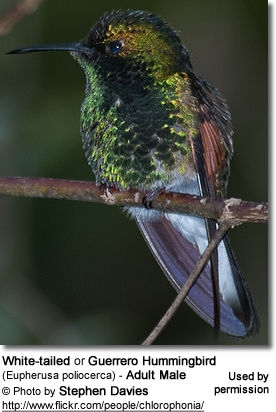 Males: Plumage mostly glossy emerald green; except for the black wings with rufous secondaries (inner wing feathers), which appear like "shoulder patches" in perched birds; and the mostly white tail except for green central tail feathers.

Females: Above glossy emerald green, like males, but below, they are grey. They have grey ear-coverts and a white post behind each eye (postocular spot). The rufous wing patch is duller and the outer flight feathers are edged dusky green.

The black bill is long and straight. 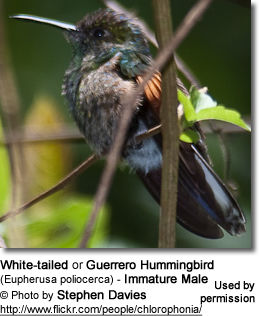 They resemble the related Stripe-tailed Hummingbirds (Eupherusa eximia) found further south in Central America and the Blue-capped or Oaxaca Hummingbirds (Eupherusa cyanophrys) found in the Sierra de Miahuatlán region in Oaxaca. They all have mostly glossy emerald green plumages and distinctive rufous wing patches. However, the male Blue-capped has a blue crown and the White-tailed Hummingbird has greyish-green central tail feathers on the otherwise white tail. Females are indistinguishable.

They could also be confused with the Berylline Hummingbirds (Amazilia beryllina), but the latter have rufous tails. 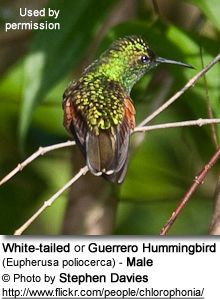 The White-tailed Hummingbird primarily feed on nectar taken from a variety of brightly colored, scented small flowers of trees, herbs, shrubs and epiphytes, in particular feeding on the flowers of Inga, Kohleria, Lobelia, Malvaviscus, Manettia, Psittacanthus and Hamelia patens.

The White-tailed Hummingbirdss are less aggressive than other hummingbirds, many of which aggressively protect their feeding or breeding territories. 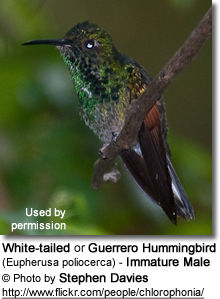 White-tailed Hummingbirds are believed to breed between February and May and then again between September and October.

As is typical of hummingbirds, they are solitary in all aspects of life other than breeding; and the male's only involvement in the reproductive process is the actual mating with the female. They neither live nor migrate in flocks; and there is no pair bond for this species. Males court females by flying in a u-shaped pattern in front of them. He will separate from the female immediately after copulation. One male may mate with several females. In all likelihood, the female will also mate with several males. The males do not participate in choosing the nest location, building the nest or raising the chicks.

The female alone builds the cup-shaped nest in a protected location - typically the nest is situated on a low, thin horizontal branch. She constructs the nest out of plant fibers that she weaves together and she finishes the outside off with a nice layer of green moss for camouflage. The nest is lined with soft plant fibers, animal hair and feather down. She strengthens the structure of the nest with spider webbing and other sticky material that gives the nest walls an elastic quality allowing it to double the size of the nests as the chicks grow.

In most cases, the nest contains two white eggs that are about the size of coffee beans. The female alone incubates the eggs for 15 - 19 days. Without any assistance, she raises the chicks, protecting and feeding them with regurgitated food (mostly insects since nectar is an insufficient source of protein for the growing chicks). The chicks only require near-constant brooding for the first week or two. Thereafter, the female leaves them alone even on cold nights (probably due to the small nest size). The chicks fledge (leave the nest) when they are about 20 - 26 days old.

Their calls are described as a buzzy chip, given in series and turning into trill; and the song as "high, accelerated warbling."