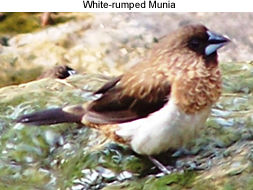 These tiny gregarious estrildid finches are related to the domesticated Society (Bengalese) finch, which are similar in appearance, but the white-rumped mannikins are smaller than most domestic society finches. These mannikins are somewhat more hyper than the society finches. The Society represents the domestic version of this finch and could be considered a subspecies in the wild form. They are readily available in the United States.

The White-rumped Munia is 10-11cm in length with a long black tail. The adult of the south Indian race (L. s. striata) has a stubby bill, dark brown upperparts, head, breast and wings, and white underparts and rump.

Other than the white on the rump and underparts, which varies in brightness, you won't find any white feathers on this finch. White feathers under the chin or elsewhere may indicate a cross with the domesticated variety.

Males and females look alike, but there is racial variation. Northern (L. s. acuticauda) has paler brown upperparts and breast, and buff underparts. The rump only is white. The sex can most easily be identified through behavior. (Refer to "Breeding" below.)

The White-rumped Munia feeds mainly on seeds. A standard finch mix works fine - although they actually seem to prefer the larger seeds of the parakeet mix. They also enjoy mashed hard boiled eggs, which breeders often offer during breeding season, green food (salads, sprouts, herbs, etc.) and bread crumbs. I mix hard boiled eggs with a bird-specific vitamin/mineral supplement available at bird stores, add some wheat germ oil and soaked bread. They really enjoy it. Don't leave these fresh food items out for long - as they go off really quickly. I offer them first thing in the morning - when they are hungry. Discard whatever hasn't been eaten within a half an hour or so.

They may also take some livefoods (insects). Calcium should be offered in the form of cuttlebone, crushed oyster shells or -- which works just as well -- crushed egg shells. Save the egg shell from boiled eggs and offer them to your birds. I mix them in with the soft food that I offer -- or try mixing them in with their seeds or offer them in a separate dish.

Males and females are very similar and the sex can best be ascertained by observing their mating rituals. The male' displays a very distinct courtship song and dance. Discreet observation is possible.

A standard finch boxes can be provided (either half open or hole entrance). Like society or zebra finches they will all stuff themselves into one box. They do well in aviaries. If you can't set up an aviary -- these indoor flights work well.

Distribution in the Wild / Habitat:

The White-rumped Mannikin is a common resident breeding bird in tropical southern Asia from the South Asia east to southern China and Indonesia.

It frequents open woodland, grassland and scrub. The nest is a large domed grass structure in a tree, bush or grass into which 3-8 white eggs are laid.