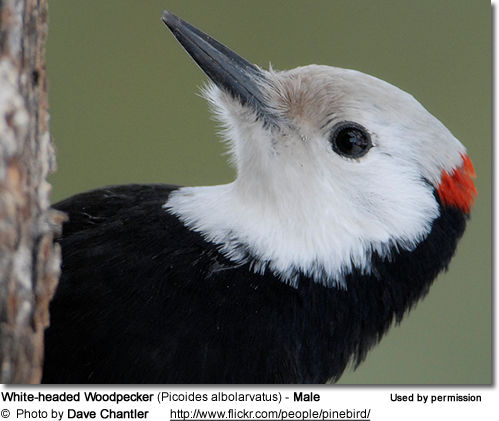 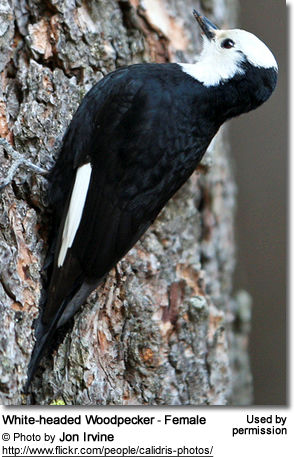 This bird dwells year-round in the Ponderosa pine forests of the far western mountains of North America; there, it feeds on pine cone seeds and forages in the soft outer layers of bark. The population of the White-headed Woodpecker is estimated at fewer than 100 in British Columbia. It is probably the least studied species of the woodpecker species. 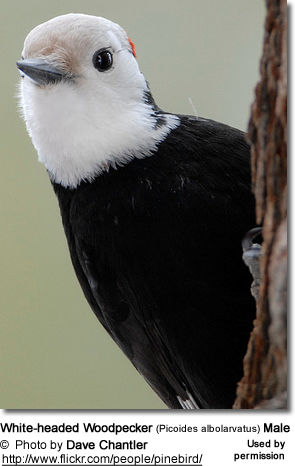 The species is limited by suitable habitat, defined by massive Ponderosa pine trees that provide sizeable cones and seeds for feeding and snags for nesting cavities. It is most often found at the lower elevations (generally below 950m, or between 4,000 and 9,000 feet elevation) and areas having a relatively open canopy (50-70 percent cover).

It is predominantly a sedentary species, although it does move through the mountain ranges; it is known to wander to the lowland regions as far as 150 km from its recognized breeding habitats. Individual birds will migrate during the winter to lower elevations near desired breeding areas. Those that remain in their resident habitats will utilize areas in which chaparrals are plentiful.

Like others of its kind, it prefers to dwell in burned or cut forests where residual, large-diameter live and dead trees prevail; they require the tall, living trees as much as the burned ones.  Local populations are abundant in these areas, even though the undergrowth vegetation is usually very sparse. Breeding habitat consists of montane coniferous forests containing Ponderosa pine, sugar pine, lodgepole pine, white fir, incense cedar, Jeffrey pine, Coulter pine, and Douglas-fir trees. 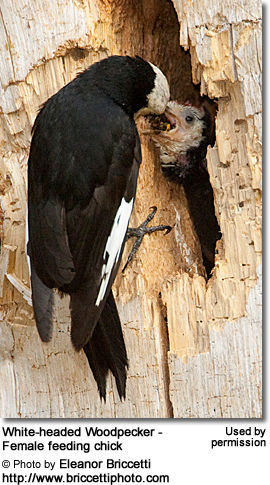 There are only two sub-species for the White-headed Woodpecker.

Most of the range is occupied by the nominate subspecies. In the southern part of the range, P. a. gravirostris is observed only on the mountaintops of the San Gabriel Mountains in San Diego County. Apparently, the larger bill of the southern subspecies is an adaptation which enables it to feed on the large, spiny cones of Coulter Pines (Pinus coulteri).

This dimorphic species is of medium-build in adulthood, and his length reaches 9 inches (20 cm).

The White-headed Woodpecker is just that—a black woodpecker with a white head. The wing stripes are spectacular, particularly when viewed from below as the bird flies. The white primary feathers form a crescent in flight, .and they can be viewed when the bird is at rest as well. The throat is also white, and his red, narrow crown patch is farther back than it is on most woodpeckers’ heads.  There is a small, black stripe behind the eye.

The straight bill is black and small. The legs and feet are black. Both genders have dark eyes.

Females have the same colors and markings but lack the red patch on the nape.

The juvenile resembles the adult, but it has a patch of red in a white field on the crown. Its black shading is duller, and the white wing patches are more broken.

Like most woodpeckers, the White-headed consumes insects it finds by foraging in the bark of Ponderosa pine trees. Foraging consists of stripping the bark away from the trunk to find its prey, rather than drilling, as most woodpeckers do. It seeks out the pine cones, assuming upside down or sideways positions while eating the seeds. Unlike most, though, it isn’t that fond of wood-boring insects. If a sufficient number of pine cones cannot be obtained during the winter due to the limited number of trees available, the White-headed will seek out alternative large pine trees for their cones. This limited diet is a key factor in the birds’ small populations.

Their winter diet consists of insects, which it catches in flight as well as on the ground, seeds, berries and nuts. During the spring and summer months, another food source includes mullein seeds (a flowering plant). By late summer, however, the White-headed Woodpeckers return to their exclusive winter diet of Ponderosa pine seeds, insects, seeds, and berries.

The birds can be seen pulling pine seeds from the open cones as they perch atop them; they then drill into the cone to remove its seeds. Rather than drilling directly into live, decayed or dead wood, the White-headed flakes off the bark and probes the needle clusters. Because they pry rather than hammer bark from trees and forage by excavating cones, their exploring tends to be quieter than that of other woodpeckers. The population is highest in areas where two or more species of good-sized, seed-laden pines exist. These woodpeckers may visit backyards which contain the dead trees and the pines they need. They will also visit suet feeders where available.

The White-headed Woodpecker seeks snags (partially collapsed, dead trees), stumps, logs—both standing and fallen—in which to build its nest. For nest sites, it prefers large Ponderosa pine snags comprised of a hard outer wood with soft heartwood. In British Columbia, 80% of reported nests have been in Ponderosa pine snags, while the remaining 20% have been recorded in Douglas-fir snags. Excavation activities have also been recorded in Trembling Aspen and fence posts. Although the use of live Ponderosa pines has been reported, most cavities are drilled into dead wood. The birds will construct the nest in the largest-diameter tree they can locate.

This species will generally choose a location within 3 -5 meters of the ground. The cavities, unlike those of many other woodpecker species, are typically not reused as nest sites by the pair; instead, they prefer to construct new nests each year. They will, however, continue to use the old nests for overnight roosting. Construction begins in April and early May, and it will take three to four weeks to complete.

The White-headed Woodpecker lays 2-8 eggs (usually 3-5) in May or June. During the breeding season, the male roosts overnight in the cavity with the young until they are fledged. Both parents incubate the eggs during the 14-day period, and both continue to care for the altricial nestlings until the young leave the nest after about 26 days.

White-headed woodpeckers have one brood per breeding season, and there is no replacement brood if the first one is lost. Ordinarily, these woodpeckers are only highly territorial during the breeding season. A reclusive species, they prefer to remain either as solitary individuals or within their pair bonds and family groups rather than interacting with others of their species or birds of other species. They will not tolerate humans near their nest areas.

The monogamous White-headed Woodpecker continues its pair bond with its mate through the year. These birds are typically solitary but may be found in pairs, particularly during the breeding season.

Both sexes give a call throughout the year often described as "pee-dink" or "pee-dee-dink". This call can be interspersed with drumming consisting of an even roll of 15-30 beats. This drumming takes fewer than 1 ½ seconds! White-headed woodpeckers have a short, sharp, rattling call with a high pitch. Their drumming is rapid and given in short bursts.

The White-headed Woodpecker is listed as a Species of Special Concern in Idaho, a Critical Species in Oregon, and as a Sensitive Species by the U.S. Forest Service in the intermountain and northern regions of the west. It is proposed for listing in Washington and is nationally listed as endangered in British Columbia. A conservation strategy for Idaho involves management of habitat through altering forestry practices. Specifically, the strategy recommends maintaining 45 large snags per 40 hectares of suitable habitat in order to support 5 pairs of White-headed Woodpeckers. Clear-cutting and deforestation are major threats to the birds.

Listed as a priority species in Partners in Flight's Bird Conservation Plan for the Northern Rocky Mountains, it is a species that has undergone significant decline. The population objective is to maintain known breeding sites and increase the current geographic range by establishing breeding populations (>10 pairs/area) in at least 10 new locations (5 in Blue Mountains and 5 in Northern Glaciated Mountains) by 2025.