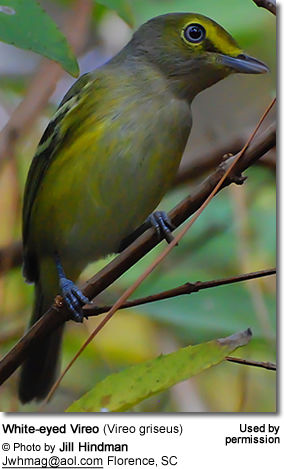 The White-eyed Vireos (Vireo griseus) breed throughout the eastern United States north to Massachusetts. They commonly winter along the lower southern coast, Florida, and along the Gulf Coast.

They prefer low, brushy areas, such as a waist-high bramble patch.

The White-eyed Vireo is olive-grey above and white below, with pale yellow sides and flanks; two white wing bars, and well-defined yellow spectacles (the combination of an eye ring and a supraloral line that contrast with the rest of the face). The distinctive white iris is visible at close range. 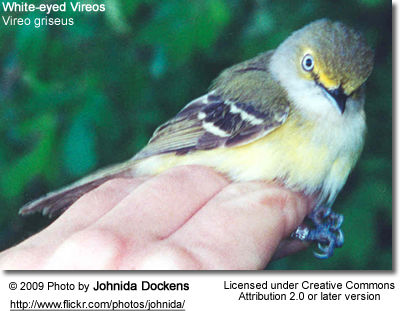 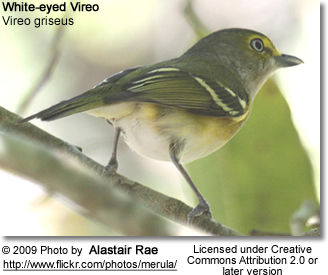 A migratory songbird more frequently detected by ear than by eye is the White-eyed Vireo. This species is cryptic in both plumage and behavior, but the males more than make up for this with explosive and complex singing. As a group, the Vireo family are somewhat greenish on their backs and sides, and as a result blend in well in foliage. They forage methodically among leaves, and without moving can be quite hard to spot. In fact, the Latin word Vireo translates to "a small green bird". The habitat of the White-eyed Vireo could best be described as a brief window of forest succession. Prime vireo habitat is ten- to forty-year-old abandoned pasture land, a combination of shrubby growth and hardwood trees. Since the dense scrub habitat this species prefers has little economic value, it is rarely protected. 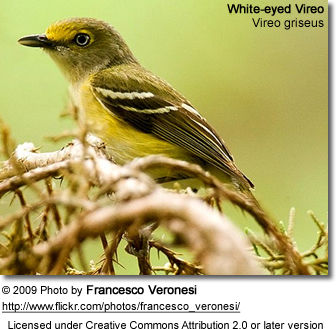 The White-eyed Vireo is found throughout the state in dense thickets, most commonly in moist situations. It is considered by most to be a neotropical migrant. Neotropical (New World) migratory birds breed during our summer in temperate North America, migrating north each spring from wintering areas, then fly back south to spend the bulk of the year in Mexico, Central or South America, or the Caribbean. Occasional winter birds are found in the Carolinas, and some vireos are found commonly year-round in the deep south and along the gulf coast.

This is a species of eastern North America. In the late nineteenth and early twentieth centuries, populations have increased or decreased over time in relation to the amount of scrub habitat that is available. Since the mid-1970’s, the species has expanded its numbers in the central part of the breeding range, and extended its range in the western edge of its range. Clearing of woodlands are likely a factor in these changes.   Densities vary depending on habitat. In large areas of suitable habitat, densities can reach up to 2 or 3 pairs for every couple of acres. Breeding Bird Survey data show highest numbers occurring in the coastal plain of southern states. In the eastern United States, there have been significant short term declines since about 1980, but overall over the last 30 years populations trends remain virtually unchanged.

This is our only vireo with two white wing bars, yellow spectacles and yellowish sides. Upperparts are greenish gray or olive green, and tinged with yellow. The neck is grayish and they are nearly white below, including the throat. The sides and flanks can be startlingly yellow at close range. Males and females look similar, and the adults have a distinctive white iris. The legs are grayish and the bill is shiny black, and it is hooked downward at the tip. Adults and young hop among branches, and their flights are usually short with rapid wingbeats.

In migration and during the early days in the breeding season, males sing to attract mates, usually while perched high in a tree. It is at this time they are easiest to observe. Males vigorously defend their territories, while females are tolerant of others sharing the same area. Males often use the same territory from year to year, and older males arrive on the breeding grounds before young males. Females wander from territory to territory and eventually choose a mate and then a nest site. The pendulous, cup-like nest is attached to a Y-shaped horizontal branch a few feet off the ground in dense vegetation. Both birds participate in nest-building, incubation and feeding of young. Nests commonly are parasitized by Brown-headed Cowbirds, and vireo offspring usually do not survive.

Up to twenty-five different songs are predominate in the White-eyed Vireo population in the eastern United States. Each individual has a repertoire of about a dozen songs, only males sing on the breeding grounds. Both sexes sing on the wintering ground to defend territories. Singing is believed to be learned behavior, with young birds adapting the song set of their father. White-eyed Vireos repeat an individual song type multiple times before switching to another song, and the order of songs appears to be random from one singing bout to the next. Insects are the principle food taken, and especially Lepidopteran (butterfly and moth) larvae. Some fruit is taken all year, but much more during the nonbreeding season. The White-eyed Vireo is a foliage gleaner, and it forages deliberately with short hops or flights. Most of the food is taken from leaves, and after a food capture, the bird will usually perch and swallow. An interesting behavior is the repeated flogging of large caterpillars on a branch before eating. Some important documented fruit foods include: sumac (Rhus spp.), poison ivy (Toxicodendron radicans), pokeweed (Phytolacca americana) and wild grapes (Vitis spp.). Most foraging is between 3 and 15 feet of the ground.

A principal restriction on this bird seems to be the availability of suitable dense scrub habitat. On the subtropical wintering grounds, it is more variable in habitat selection, and probably has not been seriously impacted their by habitat changes. As long as sufficient secondary deciduous scrub is available, the White-eyed Vireo most likely will continue to thrive.

White-eyed Vireos breed throughout the eastern United States north to Massachusetts, and they are found throughout our state during the breeding season. They can be found commonly in winter along the lower southern coast, Florida and along the gulf coast, but also migrate to spend the nonbreeding season within the Yucatan Peninsula, Belize Honduras, parts of the Bahamas, and parts of the Caribbean. Life span thought to be rather short, but few studies have been conducted. Severe winters may cause high mortality in southern and gulf coastal United States.

Since the habitat this species uses in our state is generally created by clearing or disturbance of land, for now populations seem to be stable. Good numbers also occur in the extensive pocosins of eastern North Carolina. The forest products industry creates thousands of acres of potential habitat each year, and the main window of use occurs in 10-40-yr-old abandoned pasture or cleared land with extensive undergrowth, shrubs and saplings, interspersed with a few taller trees. Adults have been reported killed by artificial structures, including TV towers. Because typical White-eyed Vireo habitat is not highly valued by humans, nesting areas, especially in rural regions, are frequently kept cleared.

Juvenile White-eyed Vireo can resemble Yellow-throated Vireo but has white throat. Bell's Vireo has broken eye ring, lacks yellow spectacles, usually shows fainter wing bars and has a dark eye as an adult. Empidonax flycatchers can have an olive back, wing bars, and white underparts with yellow flanks, but lack spectacles and have dark eyes.