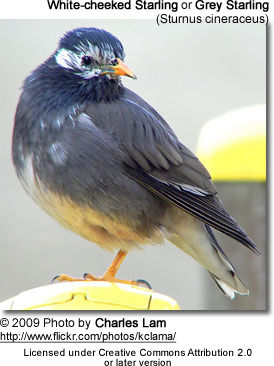 The White-cheeked Starling or Grey Starling (Sturnus cineraceus) is a passerine bird of the starling family.

It is native to eastern Asia where it is a common and well-known bird in much of its range.

The breeding range covers central and north-east China, Korea, Japan and south-east Siberia. In winter birds from colder regions migrate south to southern and eastern China, South Korea, southern Japan, Taiwan and northern Vietnam with vagrants reaching the Philippines, Thailand and Myanmar. There is a record from Homer, Alaska in 1998 which probably arrived with a ship (West 2002).

It inhabits woodland, farmland, and open country and has also adapted to parks and gardens in urban areas. It is most common in lowland areas (usually below 700m in Japan). 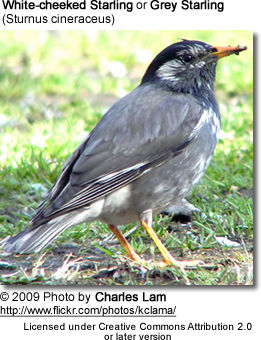 White-cheeked Starlings are 24cm in length.

The adult male is mainly dark grey-brown with a paler belly and a whitish band across the rump. The head is blackish with whitish cheeks and forehead. There is a white border to the tail and white markings on the secondary wing feathers. The legs are pale orange and the bill is orange with a black tip.

Adult females are similar to the males but paler and duller.

The juvenile is brown with pale cheeks and rump and no black tip to the bill.

The loud, monotonous call is a series of harsh, creaking notes.

It has a varied diet which includes fruit and insects such as mole crickets. 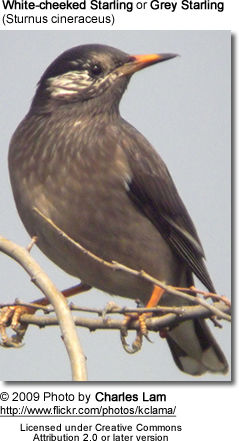 The breeding season lasts from March to July and often two clutches of eggs are laid during that time. The nest is built in a hole in a tree or building or in a nestbox.

Four to nine eggs are laid and are incubated for 14 to 15 days. The young birds fledge 13 to 15 days after hatching. 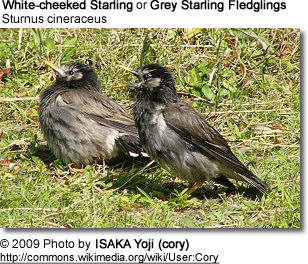 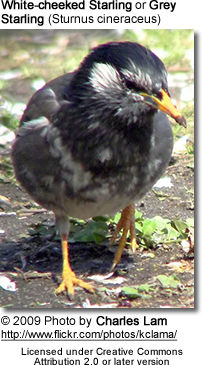 This is the bird species the Pokémon Starly, Staravia, and Staraptor are based on.

Usually, it is placed in the genus Sturnus, but sometimes it is united with the typical mynas in Acridotheres. This is supported by recent studies, but together with the Red-billed Starling (Sturnus sericeus) which seems to be its closest living relative it represents an old lineage among the typical mynahs.

They might arguably be awarded a distinct genus, but this is probably unnecessary.(Jønsson and Fjeldså 2006, Zuccon et al. 2006)