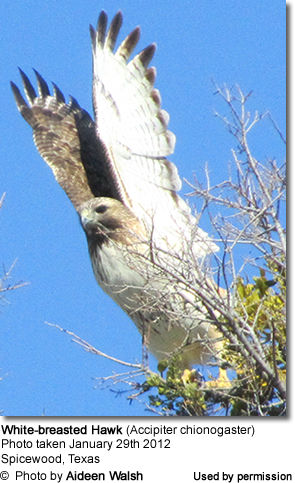 It occurs in highlands from far southern Mexico (Chiapas and Oaxaca), through Honduras, Guatemala and El Salvador, to Nicaragua. It is, as far as known, resident, but some local movements may occur.

This hawk is endangered because of its limited range; however, it is fairly common in localized areas.

It occurs in a wide range of woodland and forest types, both dominated by conifers and by various types of broad-leaved trees (especially oaks). It is found in upper tropical to temperate highlands; mainly at altitudes of 300-3000 m (990-9850 ft), but occasionally down to near sea-level and up to 4000 m (13100 ft).

Adults have short broad wings and a long square-ended tail banded in blackish and grey (often narrowly tipped white). The remiges (typically only visible in flight) are whitish barred blackish. Legs yellowish. The hooked bill is black and the cere is yellowish.

Species ID: The White-breasted Hawk resembles the members of the nominate group (Accipiter striatus), except the upperparts are darker (often appears almost black), the thighs are whitish-buff and underparts and the cheeks are entirely white. Juveniles have darker upperparts and distinctly finer streaking below than juveniles of the nominate group.

The great majority of this hawk's prey is small birds, especially various songbirds such as sparrows, wood-warblers and American Robins. Birds caught have ranged in size from a 4.4-g Anna's Hummingbird to a 577-g (1.2-lb) Ruffed Grouse and any bird within this size range is potential prey. Typically, males will target smaller birds, such as sparrows, and females will pursue larger prey, such as American Robins and flickers. They often pluck the feathers off their prey on a post or other perch.

Sharp-shinned Hawks will construct a stick nest in a large conifer or dense group of deciduous trees. Clutches of 3 to 8 eggs have been recorded, but are usually 4 to 5 eggs. The eggs measure 37.6 x 30 mm (1.48 x 1.18 in) and weigh about 19 g. The eggs are prized by egg-collectors, because they are heavily marked with surprisingly colorful and varied markings. The incubation period is thought to average at about 30 days.

After hatching, the young are brooded for 16 to 23 days by the female, while the male defends the territory and catches food. The young fledge at about a month old and rely on their parents for feeding and protection another 4 weeks.

The nesting sites and breeding behavior of Sharp-shinned Hawks are generally secretive, in order to avoid the predation of larger raptors, such as the Goshawk and the Cooper's Hawk. While in migration, adults are sometimes preyed on by most of the bird-hunting, larger raptors, especially the Peregrine Falcon.

Little is known about the breeding behavior of the White-breasted Hawk, but it is likely to be similar to that of the nominate group.

Copyright: Wikipedia. This article is licensed under the GNU Free Documentation License. It uses material from ... Adapted by Avianweb.