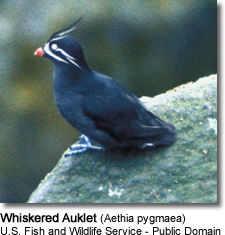 The Whiskered Auklet, Aethia pygmaea, is a small seabird of the auk family.

It has a more restricted range than other members of its genus, Aethia, living only around the Aleutian Islands and on some islands off Siberia (like Commander Islands), and breeding on these islands.

The Whiskered Auklet is a poorly studied species and much research needs to be undertaken on the species. It was originally described as two different species, from specimens collected at different ends of its range, however research has shown that it is a single species with clinal variation along its range. It is not thought to undertake migration, but instead attends its breeding islands year round.

It is one of the smallest alcids, only the closely related Least Auklet being smaller. Its name is derived from the long white feathers on its face that are part of its breeding plumage.

Whiskered Auklets lay a single egg in a rocky crevice, in loose colonies with other Whiskered Auklets and also other colonial seabirds. Both parents take part in incubation and chick rearing. The whiskers have been shown to help them sense their way to and out of their nests at night.

Whiskered Auklets feed in the inshore zone, usually within 16 km of land, where tidal currents concentrate their prey into dense swarms.

They feed predominantly on copepods during the summer months, mostly on the species Neocalanus plumchrus; and switching to euphausiid krill in the fall and winter.