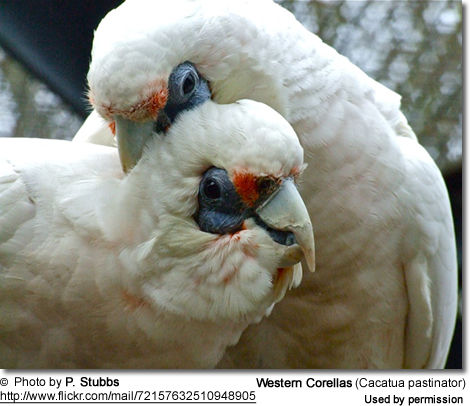 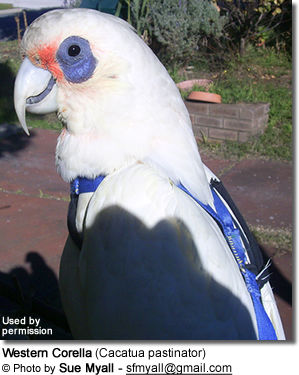 They reach reproductive maturity when they are about 3 - 5 years old and even though most are believed to perish before they reach breeding age, those that survive can expect to live 25 years or even longer. 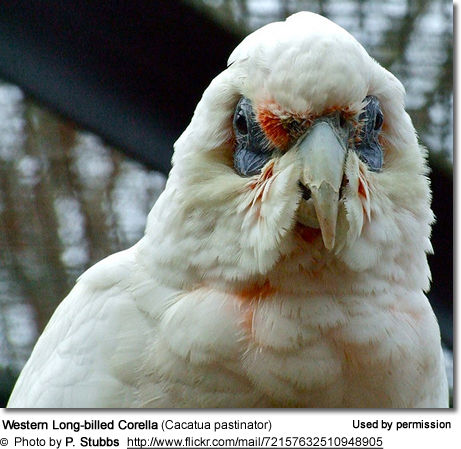 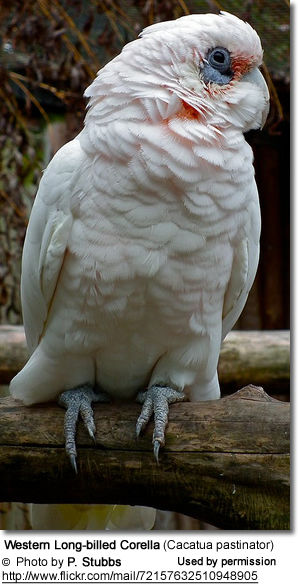 These cockatoos are found in the southwestern parts of Western Australia, where they appear to be mostly resident, except for local movements in response to availability of food and water. There is no evidence of large-scale seasonal migration.

They are most commonly found in / on ... 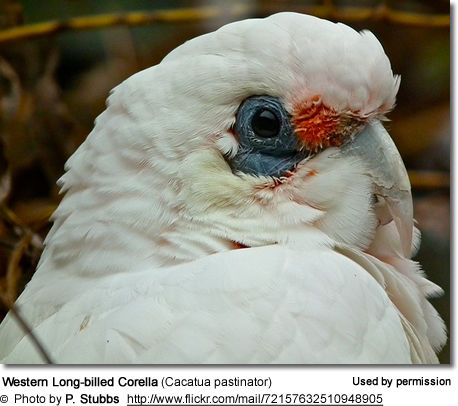 The plumage is mostly white with a prominent orange-red wash over the lores (area between the eyes and the bill) and a strong yellow wash on the undersides of the wings and tail. The feathers of the head, neck and chest have orange-red basis that are usually only exposed during preening or if ruffled by the wind.

The eyes are dark brown with a ring of blue-grey skin around each eye (more extensively beneath the eyes). The bill is pale-grey to off-white. The legs and feet are grey.

The male and female look alike.

Their diet consists mostly of seeds from grasses and other plants; but they also feed on cereal crops, insect larvae, flower heads, leaves, bulbs, roots, corms, tubers, fruits, and, possibly, nectar. They also seek out artificial grain-sources, including silos, pigpens and grain-fed cattle and sheep.

They use their long upper bill to dig in the ground for roots, pluck seeds from the heads of standing cereal crops; pull up seedlings and bite through stems of thistles to feed on their seeds.

Most breeding activities are observed from September to November with isolated breeding occurring into summer and autumn.

Pairs are monogamous and share the tasks of preparing the nest site, incubating the eggs and raising the young.

They usually nest at the base of hollow limbs, or in cavities of large living or dead trees. The nest floor is covered with rotten wood or wood dust. Pairs may reuse the same nest over subsequent seasons.

A clutch consists of 1 - 4 white eggs that are incubated for 26 - 29 days. Both parents brood, feed and protect the young. The chicks remain in the nest for about 53 - 67 days and are typically independent about 3 months after fledging.

Their vocalizations are described as chuckling with three notes; shrill shrieks or screeches (when agitated / alarmed); or shorter disyllabic calls, with a second tone that is more high pitched.