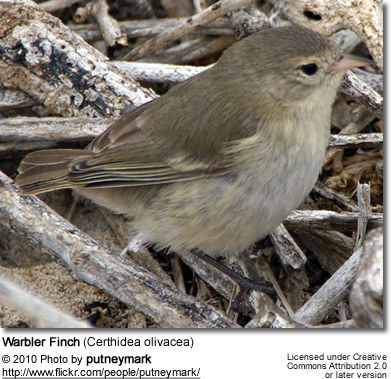 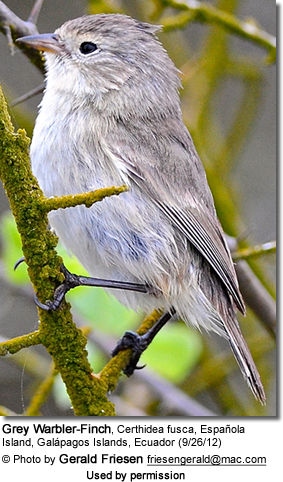 The Warbler Finches (bird genus Certhidea) are endemic to the Galápagos Islands - an island group located in the Pacific Ocean west of the South American country of Ecuador. Their common name was derived from their warbler-like appearance and behavior.

Previously they were lumped together with the Emberizidae family (Sparrows or Buntings). However, based on recent studies, it has been determined that these birds belong in the tanager family.

The Warbler Finches are part of the extensively researched, famous "Darwin's Finches" - a group of 15 species of similarly sized Passerine birds, that were first collected by Charles Darwin on the Galápagos Islands during the second voyage of the Beagle in 1835/36 . The most important differences between those species were the size and shape of their beaks. Darwin's theory of natural selection was based on the survival of those birds with beak structures that were best adapted for the food supply found in their changing environment (by random mutation).

They are also most widespread of all Darwin's finches, occurring on every major island in the Galapagos.

The Warbler Finches are the smallest of the Darwin's Finches, and have more slender bills than the others.

These small-bodied birds weigh only 0.3 oz or 8 grams. Their bills are thin and pointed.

The Warbler Finches are separated into Two Clades (Forms)

These forms look very similar, but are genetically distinct; they have different songs and are found on different islands and habitats

These insect-eating birds are the only Darwin's Finches able to catch insects on the wing (in flight). They will also use their pointed bills to dig amongst leaves, moss and soil for insects and spiders.

Most breeding occurs during the hot, wet season when plenty of food is available. These birds are monogamous, and lifelong pair bonds have been noted. However, reports exist of adults changing mates (likely if previous breeding attempts were unsuccessful or in cases where mates have been lost); or they may breed with more than one partner.

The average clutch consists of three eggs that are incubated by the female for about twelve days. The young remain in the nest for another couple of weeks before fledging.