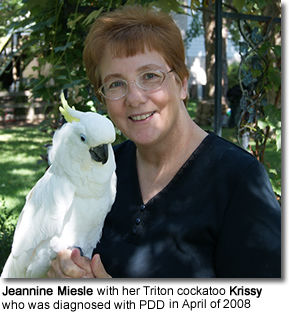 Index of Bird Diseases ... Symptoms and Potential Causes ... Bird Species and Diseases They are Most Susceptible to ... Bird Health Care ... Medications Used in Avian and Exotic Medicine and Pharmaceutical Terms ... How to administer oral medications to a bird

When psittacines and other birds were brought to European and North American countries from Africa, Asia, South America and Australia during the bird craze of the 1970’s and 1980’s, few people considered the diseases these birds might bring with them. People’s demand for these birds fueled an industry which supplied them. The diverse species of birds were quarantined next to each other and then sold to breeders and dealers.

The constant movement of birds from differing geographic regions exposed them to diseases not found in their natural environments, making them vulnerable to a wide variety of pathogens. Diseases caused by previously unknown bacteria, fungi, parasites, and viruses had then to be dealt with by the avian veterinary community. As researchers identified the pathogens, they developed assays, tests and treatments, and the number and severity of the diseases caused by these pathogens began to lessen, so that now there are fewer cases of some diseases than were seen in the earlier years.

However, many of these diseases have been passed down through generations of breeding, increasing the numbers seen. Viruses have mutated, creating difficulty in combating them. Treatment plans, vaccinations or preventative measures have been discovered for some of these, but they and others are still being researched with the goal of eradicating them. The past few years have seen a tremendous increase in the knowledge of the viral diseases of birds, thanks to new molecular-based and traditional diagnostic tools. Some of these diseases have been eliminated or at least managed; however, many continue to jeopardize the health of the captive and pet bird populations.

To understand the effects of these viruses on the birds, it would be beneficial to start with some information about viruses in general.

What is a Virus?

Viruses are infectious agents which cannot replicate outside a host cell. A virus must attach to and penetrate a cell membrane, release its genetic material and replicate within the co-opted cell. It must evade the organism’s immune systems long enough to replicate and release itself from the host cell. Without a host cell, viruses cannot carry out their life-sustaining functions or reproduce. They are not plants, animals or bacteria. They are parasites which have likely existed prior to the differentiation of the major kingdoms of life. Biologists currently consider viruses to inhabit a gray area between life and non-life.

Some microorganisms are obligate intracellular parasites.  These can only reproduce within another organism's cell. This host cell may be one of many in an animal or plant, or may be a free-living cell (a protozoan or bacterium). They cannot synthesize proteins, generate or store energy without the host cell. They must derive their energy and all other metabolic functions from the host cell. ‘When they infect a host cell, they are able to carry on many life functions, such as metabolism and reproduction. But outside a host cell, they are as inactive as a grain of sand.’ (scienceclarified.com)

Viruses are both acellular (a tissue or organism that lacks distinct cells) and intracellular (lives within a host cell) parasites. They possess no cells of their own, and can only function by invading a host cell. Obligate intracellular parasites include protozoa, bacteria and viruses. The acellular state consists of protein coat plus nucleic acid (RNA or DNA). A single, complete, fully developed virus particle independent of a host cell is called a virion.

All viruses have a protective capsid, or coat, which is the virus’ shell, composed of aggregated repeating protein subunits. The nucleocapsid, or core, is the virus’ genetic material, composed of nucleic acid (DNA or RNA) enclosed by the capsid protein coat. Some viruses are enveloped. An envelope is a membrane, or outer covering, over the capsid. The lipids in the envelope are derived from the cell that the virus took over. Not all viruses have envelopes; some consist of only the nucleocapsid, which is made from the host cell’s plasma. Those lacking an envelope are naked. (Courtesy of Howard University)

Some bacterial viruses, such as the T4 bacteriophage, infect the host in an unusual way. The virus possesses a “tail” which attaches to the surface with “pins.” As the tail contracts, its plug penetrates the cell wall and underlying membrane, injecting the viral nucleic acids into the cell. Adsorption involves the binding of attachment sites on the viral surface with receptor sites on the host cell’s cytoplasmic membrane.

A bacteriophage is a virus that infects bacteria and may integrate into the genetic material of its host cell.

Bacteriophages are used as vectors in gene cloning and have other biotechnological and antibacterial uses.  Bacteriophages have even been used to treat diseases.

Geography of a virus: Using a technique called single-particle electron cryomicroscopy, the protein shell--called a capsid--of the epsilon 15 virus was imaged in unprecedented detail. (Credit: Wen Jiang lab, Biomedicine: A Fine Structure of a Frozen Virus) “'Naked' virus particles, i.e. those in which the capsid proteins are exposed to the external environment, are produced from infected cells at the end of the replicative cycle when the cell dies, breaks down and lyses, releasing the virions which have been built up internally. This simple strategy has drawbacks. In some circumstances it is wasteful, resulting in the premature death of the cell.&rdquo

“Many viruses have devised strategies to exit the infected cell without its total destruction. This presents a difficulty in that all living cells are covered by a membrane composed of a lipid bilayer. The viability of the cell depends on the integrity of this membrane. Viruses leaving the cell must therefore allow this membrane to remain intact. This is achieved by extrusion (budding) of the particle through the membrane, during which process the particle becomes coated in a lipid envelope derived from the host cell’s membrane and with a similar composition.” (Dr. Alan Cann, microbiologybytes.com, Used with Permission)

“Usually, the cell from which the virus itself buds will often die or be weakened, and shed more viral particles for an extended period. The lipid bilayer envelope of these viruses is relatively sensitive to desiccation, heat and detergents; therefore, these viruses are easier to sterilize than non-enveloped viruses, have limited survival outside host environments, and typically must transfer directly from host to host.” (Wikipedia, the Free Encyclopedia)

THERE ARE TWO TYPES OF VIRUSES: RNA AND DNA.
Although viral structure varies considerably among different types of viruses, all viruses share some common characteristics:

RNA is involved in procuring new cells while DNA is responsible for taking over the cell metabolically as well as making and then dispersing new virus particles, changing the structure of the cell. DNA viruses are mostly double-stranded, while RNA viruses are single-stranded. (Text adapted from Science Clarified)

DNA, deoxyribonucleic acid, is the major storage for genetic codes that contain information for the functioning and advancement of all living organisms. It is found in the nucleus of a cell. The sugar present in DNA is deoxyribose, and usually it comes with a pair of molecules known as “double-stranded molecules,” with long nucleotide chains. (Nucleotide refers to the structural unit of nucleic acids.) These double-stranded molecules have narrow channels that make it difficult for destructive enzymes to penetrate them.

In DNA viruses, viral DNA integrates, or combines with, the host by instilling the genetic code specifically into the membrane of the host DNA. RNA, ribonucleic acid, assists the DNA in duplicating the cells. Lysis occurs (meaning the host cells are destroyed by the disruption of the bounding membrane), allowing the cell contents to escape. With the formation of the new viruses, the host cell membrane separates, and the new viruses are released. Viruses cannot replicate or express their genes without the help of a living cell. This image shows an influenza virus particle

Once a virus infects its host, and the host’s cells produce the necessary components for reproduction, the viral capsid is assembled without the aid of enzymes. This happens immediately. A virus can only infect a limited number of hosts. Viruses may infect any type of cell, including animal cells, plant cells and bacterial cells.
The basic process of viral infection and virus replication occurs in 6 main steps.

Other Article Contributions by Jeannine Miesle