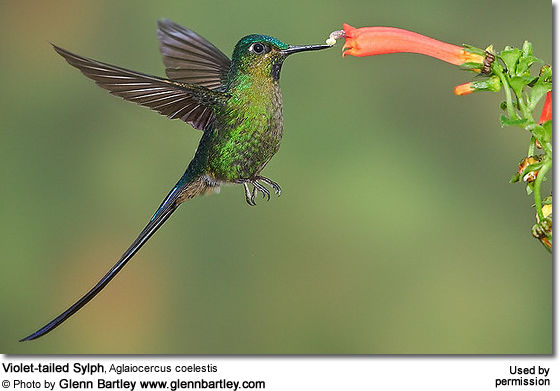 The Violet-tailed Sylph (Aglaiocercus coelestis) is a South American hummingbird that occurs naturally in Colombia and Ecuador at elevations from 300 to 2100 meters; however mostly above 900 meters.

The male has a long blue-violet tail. The rest of his plumage is mostly an iridescent green, with orangey-copper coloration on the throat and upper chest, and a blue crown.

The female is also mostly green. She has a blue crown, a rusty-orange abdomen, as well as a white upper chest band and tail tips, 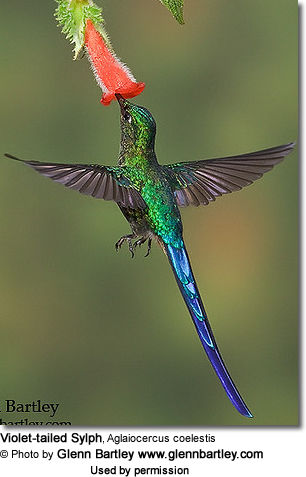 The nest is a suspended ball of moss that is fastened to leafy twigs with a side entrance. The average clutch consists of one white egg, which she incubates alone, while the male defends his territory and the flowers he feeds on. The young are born blind, immobile and without any down. 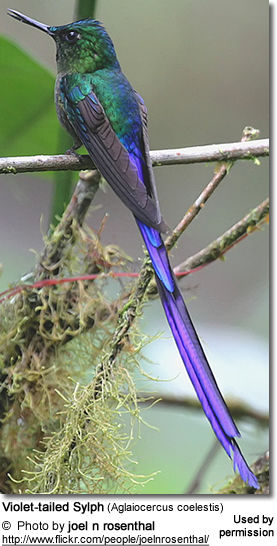 The Violet-tailed Sylphs primarily feed on nectar taken from a variety of brightly colored, scented small flowers of trees, herbs, shrubs and epiphytes. They favor flowers with the highest sugar content (often red-colored and tubular-shaped) and seek out, and aggressively protect, those areas containing flowers with high energy nectar.They use their long, extendible, straw-like tongues to retrieve the nectar while hovering with their tails cocked upward as they are licking at the nectar up to 13 times per second. Sometimes they may be seen hanging on the flower while feeding. 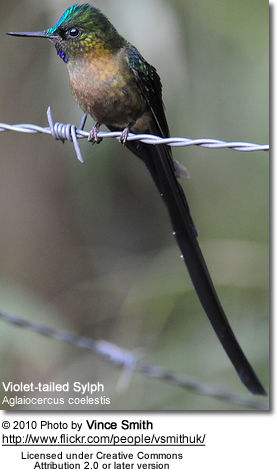