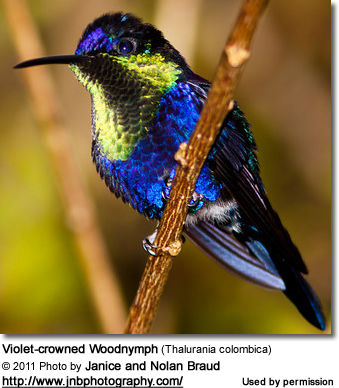 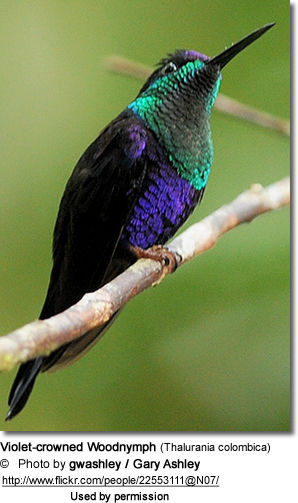 The Violet-crowned Woodnymph can be found from the Caribbean slope of Guatemala and Belize south to northern Colombia and western Venezuela, where it is common.

It inhabits wet lowlands and foothills up to 2500 m (~8,200 feet) - but may move up to higher altitudes outside the breeding season. 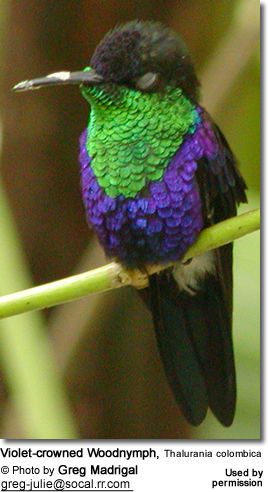 Size: This is a medium-sized hummingbird.

The male has a violet crown, upper back, shoulders and abdomen. He has a shiny green throat and breast, a green lower back, and a forked blue-black tail.

The female: Her plumage is bright green above and duller green below. She has a grey throat and breast. Her tail is rounded, mainly green near the body but with a blue-black lower half and white corners.

Immature birds: Young males lack theviolet or iridescence that can be seen in the adult male. They are bronze-colored below. Young females have buff fringes on the nape feathers (back of the neck), as well as face and rump. 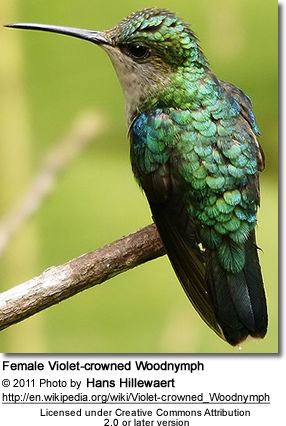 The female Violet-crowned Woodnymph is responsible for building the cup-shaped nest out of plant fibers woven together and green moss on the outside for camouflage in a protected location in a shrub, bush or tree - usually about 1 -5 m high on a horizontal branch . She lines the nest with soft plant fibers, animal hair and feather down, and strengthens the structure with spider webbing and other sticky material, giving it an elastic quality to allow it to stretch to double its size as the chicks grow and need more room. The nest is typically found on a low, thin horizontal branch.

The average clutch consists of two white eggs, which she incubates alone for about 15 - 19 days, while the male defends his territory and the flowers he feeds on. The young are born blind, immobile and without any down.

As is the case with other hummingbird species, the chicks are brooded only the first week or two, and left alone even on cooler nights after about 12 days - probably due to the small nest size. The chicks leave the nest when they are about 20 to 26 days old.

The Violet-crowned Woodnymphs primarily feed on nectar taken from a variety of brightly colored, scented small flowers of trees, herbs, shrubs and epiphytes. They favor flowers with the highest sugar content (often red-colored and tubular-shaped) and seek out, and aggressively protect, those areas containing flowers with high energy nectar.They use their long, extendible, straw-like tongues to retrieve the nectar while hovering with their tails cocked upward as they are licking at the nectar up to 13 times per second. Sometimes they may be seen hanging on the flower while feeding.

In winter, when flowering plants may not be readily available, these birds may drink the sap from holes created by sapsuckers (woodpeckers), as a substitute for nectar. They may also take advantage of local hummingbird feeders for some sugar water, or drink out of bird baths or water fountains where they will either hover and sip water as it runs over the edge; or they will perch on the edge and drink - like all the other birds; however, they only remain still for a short moment.

They also feed on small spiders and insects - important sources of protein particularly needed during the breeding season to ensure the proper development of their young. Insects are often caught in flight (hawking); snatched off leaves or branches, or are taken from spider webs. A nesting female can capture up to 2,000 insects a day.

This hummingbird is generally quiet. Its call is a high-pitched fast kip.