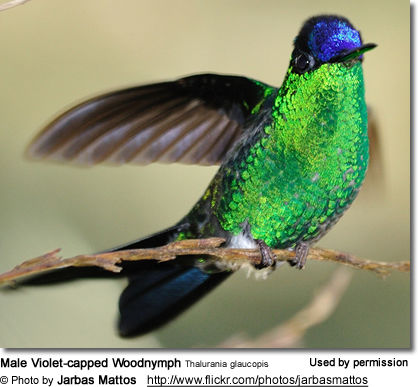 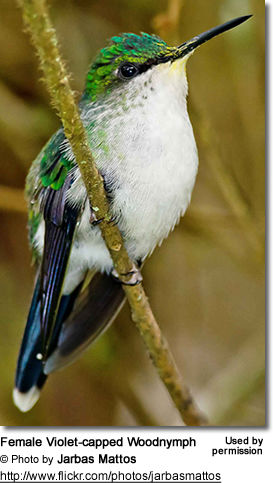 It is widespread and generally common, and therefore considered to be of Least Concern by BirdLife International (and consequently the IUCN).

The Violet-capped Woodnymph measures about 4.4 inches (11.1 cm), including the tail. The bill is about 0.7 inches (1.8 cm) and the tongue about 1.6 inches (4 cm) long - both are well are adapted for feeding on deep, tubular-shaped flowers.

The male can be identified by his brilliant violet cap. The rest of his plumage is mostly glossy green, apart from the deeply forked dark blue tail.

The female is not as flashy as the male. Her cap is greenish and her plumage below is whitish. There is a pale tip to her tail. Her tail is shorter than the male's. 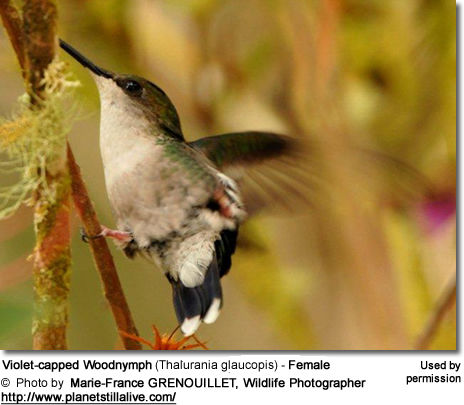 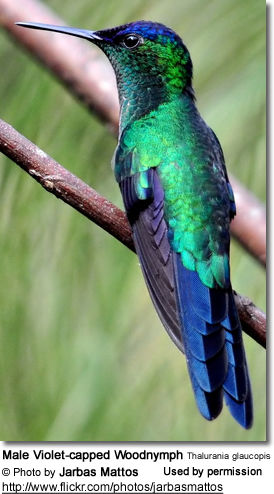 The Violet-capped Woodnymph is responsible for building the fairly large cup-shaped nest out of plant fibers woven together and green moss on the outside for camouflage in a protected location in a shrub, bush or tree - usually situated over a stream. She lines the nest with soft plant fibers, animal hair and feather down, and strengthens the structure with spider webbing and other sticky material, giving it an elastic quality to allow it to stretch to double its size as the chicks grow and need more room. The nest is typically found on a low, thin horizontal branch. 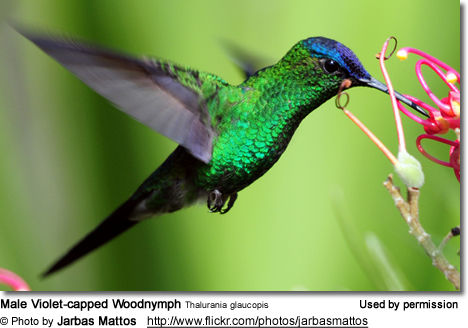 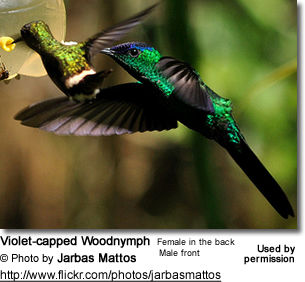 Even though Violet-capped Woodnymphs eat some small insects, they primarily feed on nectar taken from a variety of brightly colored, scented small flowers of trees, herbs, shrubs and epiphytes. They favor heliconia and banana flowers; but may also visit some flowers that open during the night for bats.

To a lesser extent, they feed on small spiders and insects - important sources of protein particularly needed during the breeding season to ensure the proper development of their young. Insects are often caught in flight (hawking); snatched off leaves or branches, or are taken from spider webs. A nesting female can capture up to 2,000 insects a day. 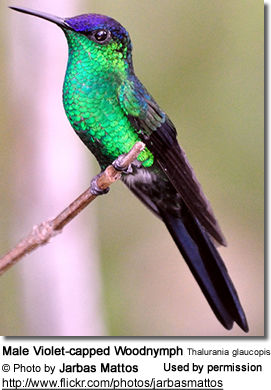 With the exception of insects, hummingbirds have the highest  metabolism rate of any animal on earth (high breathing rate, high heart rate, high body temperature).

Because of their "extreme" metabolism, the active hummingbirds require frequent feedings throughout the day - every ten to fifteen minutes and potentially visiting 1,000 flowers a day, lapping up nectar at the rate of 13 licks per second. They have to eat up to half of its body mass and drink roughly eight times its body mass each day. In preparation for an impending migration, hummingbirds may consume 3 up to 10 times their body weight in food - about 14,000 calories per kilogram - per day. (Humans consume, on average, 26 calories per kilogram per day). Before migration, hummingbirds will almost double their weight as they store up fat to serve as fuel and hence increasing their potential flying time.

The hummingbird has the largest heart in proportion to its body - and has the highest heartbeat rate. Their hearts, on average, pump about 1,200 times per minute in flight and 200 beats per minute at rest– making it the fastest beating heart of all animals - except for the pygmy shrew with a recorded heartbeat of up to 1511 times per minute. (A shrew is a small animal that resembles a mouse – it occurs in Asia.) The Violet-capped Woodnymph's heartbeat (resting after a flight) has been recorded at 635 beats per minute and its daytime body temperature ranges from 105° to 108°F (40.5° to 42.2°C). 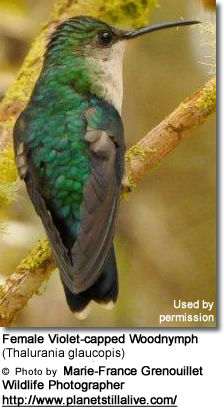 To conserve energy at night when they are not feeding, their bodies go into a state of torpor (temporary or semi-hibernation). During this time the hummingbird's body temperature drops down dramatically from its daytime temperature of about 105° (40.5°C) to 19 °C (66 °F) and the heart rate slows down from about 200 (average daytime resting heart rate per minute)to 50 - 180 beats per minute. Hummingbirds may even stop breathing for periods of time. This allows hummingbirds to use up to 50 times less energy than they would need during their daytime activities. During this time, the hummingbirds cling to a branch and sit almost lifeless; sometimes their feet (which are known to be quite weak) will loosen their grasp enough to swing downwards and hummingbirds remain hanging upside down on the branch until the next morning or until they become alert when approached. People may even find semiconscious hummingbirds on branches, window sills or in garages, and when picked up, the warmth of hands is often enough to revive them, and they will buzz off in perfect health. This so-called "suspended animation" also enables hummingbirds to survive cold nights or any time that food might be scarce. At sunrise, the body temperature goes back up (which can take a few minutes up to an hour), and they will resume their normal activities - typically feeding before doing anything else. However, whether or not hummingbirds become torpid depends on their diet, health and type of activity they are engaged in (Long, 1997). For example, nesting female hummingbirds do not enter torpidity when incubating eggs as they need body heat to keep the eggs warm.

Unique flight abilities: Hummingbirds have skeletal and flight muscle adaptations that allow them to rotate their wings almost 180° - enabling them to fly forwards, backwards, up, down, sideways, even upside down. They can also remain still in space by moving their wings in a figure-eight pattern enabling them to remain stationary in the air - hovering in front of flowers as they feed on nectar. In fact, hummingbirds are more maneuverable than helicopters. Their normal flight speed is 30 mph (48 km/h), but they can reach 50 mph (80 km/h) during an escape or chase and even 63 mph (101 km/h) during a dive. Hummingbirds also spend a higher percentage of their lives flying than any other species. All of this is amazing particularly considering that these tiny birds weigh as little as a penny.