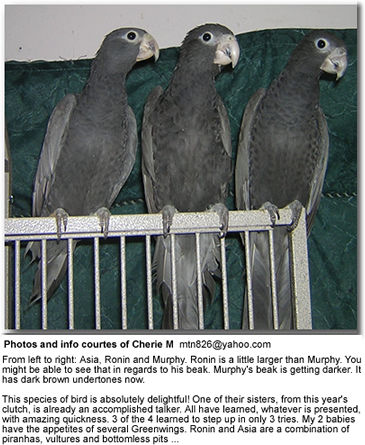 The Vasa Parrots, Coracopsis, are two species of parrot which are endemic to Madagascar and other islands in the western Indian Ocean.

The popularity of the vasa parrot, both in aviculture and the pet trade, has grown immensly over the last years.

They are notable in the parrot world for their peculiar appearance, which includes extremely truncated bodies with long necks, black to grey feathers and a pink beak.

The skin of both female and male Vasas turns yellow during the breeding season, and there is often feather loss. However in females the feather loss can result in complete baldness.

Another interesting feature of the females breeding physiology is when her feathers, which are usually black to grey, turn brown without a molt. This is caused by the redistribution of melanin, which is the pigment that makes the Vasas' feathers black.

Vasa parrots infected with the debilitating Psittacine beak and feather disease are known to turn white, which, during the 1970s when the first wave of birds were exported into Europe and America, resulted in them being mistakenly advertised by importers as albinos.

Phyllis Martin and Kim Walde - from the Faunalink Foundation located in Plant City, Florida - are in contact with ornithologists in Madagascar who are working on having the Greater Vasa Parrot reclassified. They feel that the Vasa Parrot actually requires meat in their diet and are, therefore, being thought of as the genetic link between parrots and raptors; and that the Vasa Parrot - unlike other parrots -- hunt in the wild. 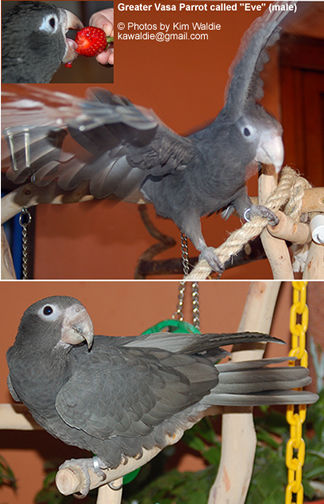 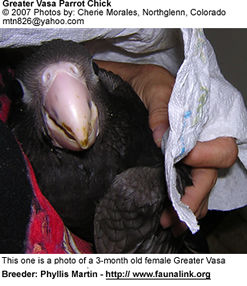