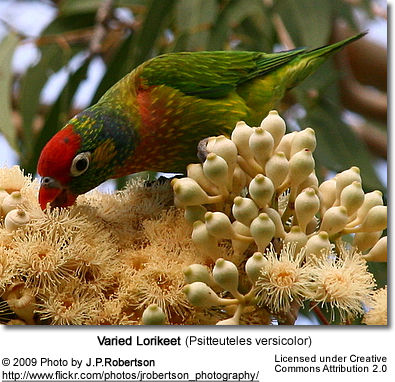 They are fairly common in the west and central part of this range, but are growing very rare towards the east. In some parts of their range the birds are nomadic following the supply of flowering or fruiting trees and shrubs.

Like other lorikeets, the diet consists predominately of nectar, pollen and fruit.

The mainly green Varied Lorikeet averages 7.5 inches (19 cm) in length and weights around 2 oz (55 to 60 grams). No mutations are known of this species. Both sexes look alike making visual sexing very difficult, however, the females tend to be slightly duller in color than the males.

Birds are sexually mature at 12 to 14 months. 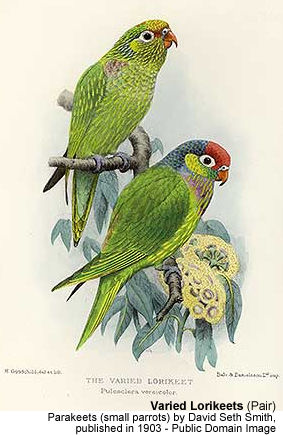 The Varied Lorikeet is one of the rarer lorikeets kept in Australian aviaries and is almost unknown outside of Australia. As they are so rare, any captive lorikeets are usually put in a breeding program and little is known pertaining to its pet potential - although it is assumed that they share the delightful personality of the other lorikeet species.

Because of its relatively low numbers in aviculture, all young produced are very much in demand with aviculturalists in Australia. However, this lorikeet is regarded as the most difficult lory to breed, and it is recommended that only experienced aviculturists attempt to incorporate this species into their breeding program.

Housing: They are best housed as single pairs as they can become quarrelsome during the breeding season, which in aviaries is from July to October, somewhat later than in the wild.

Nesting Box: A small nest box is adequate, 20 cm by 20 cm by 30 cm deep, with a 7 cm opening. An absorbent nesting material needs to be used, such as sawdust, to absorb the runny droppings.

Incubation and Chick Rearing: The average clutch consists of four eggs, which are incubated by the female for about 22 days. Both parents share in feeding of the chicks, which fledge after 40 days. The young become independent abouut 2 weeks after fledging.

Diet: A typical lorikeet diet is needed, as described on this page.