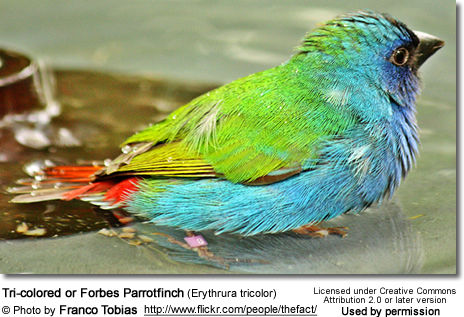 The Forbes Parrotfinches occur naturally in the central and eastern Lesser Sunda islands group, specifically on Tanimbar islands, and the tropical islands of Babar, Damar, Romang, Wetar and Timor.

They are usually found in subtropical or tropical dry forests, along the forest edge, in grasslands, dry savannas, and bamboo thickets, as well as nearby farmlands. 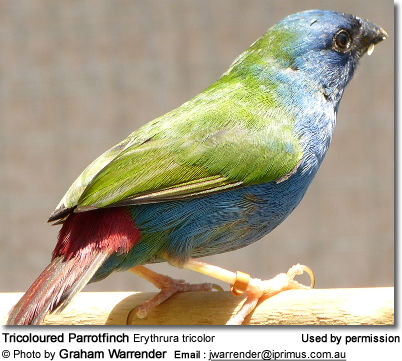 The Forbes Parrot finches are amongst the smallest members of the Parrotfinch family (Genus Erythrura).

In captivity, several mutations have occurred, including: 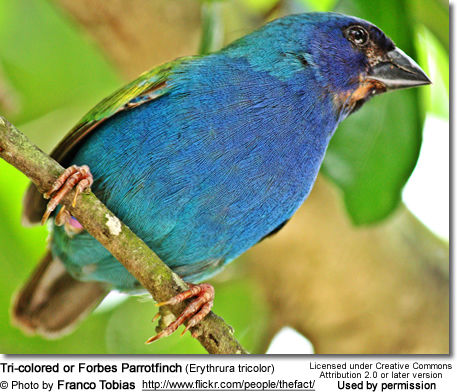 Male Tri-colored Parrotfinches will pursue the female as part of the mating ritual. Sometimes his chase is successful and he will climb on top and copulate with the female; other times, the male will give up and try again later. All this serves to get both him and the female in good physical shape for the demanding job of raising young.

After the act of mating, the pair gets started on the nest, which is usually placed in a shrub or dry bush. The male either carries nesting material to the female for her to add to the nest, or he will work on it himself. The nest is constructed out of grasses, coconut fiber and other soft materials in a dome-shape with a side entrance. It is lined with soft fine grasses, such as Swamp or November grasses, as well as feathers and hair. The construction of the nest takes from 1 - 3 days. Egg laying typically starts within a couple of days after completion of the nest. Nests are often reused over several seasons.

They usually produce 2 - 3 clutches a year and a nest may consist of 3 - 6 white eggs (rarely more than 4). Incubation usually starts when the clutch is close to being completed. The parents share the tasks of incubating the eggs for 13 - 15 days to hatching, and raising the young. The young fledge (leave the nest) when they are about 18 - 23 days old, and they are independent another 3 - 5 weeks later.

Tri-colored Parrotfinches reach reproductive maturity when they are about 6 months old, at which time they will also have attained their adult plumage.

Actual nesting usually starts when they are either one year or close to one year old and continues until the age of about 4 years.

Their average lifespan is 6 - 8 years.