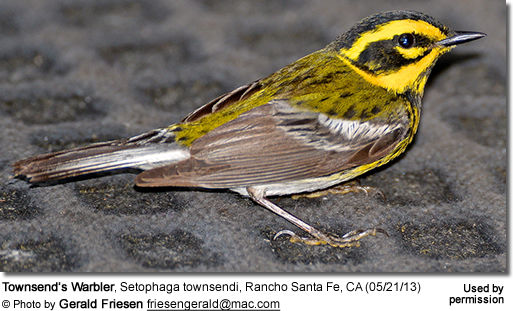 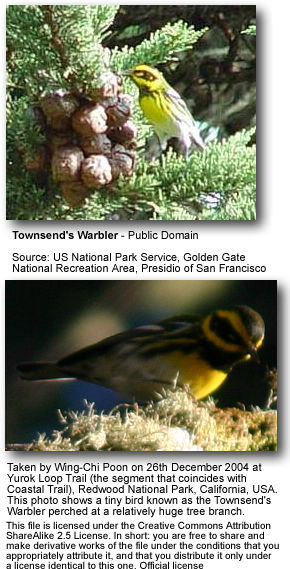 The Townsend's Warblers (Setophaga townsendi) are colorful, small songbirds that belong to the wood-warbler family.

Because of their bold yellow and black plumage details, they are one of the most distinctive of all the warbler species. Breeding males are most easily recognized by the yellow faces with black streaks, and their black bibs that contrast greatly with their bright yellow upper chests.

They are part of the "virens" (green) Warbler group - together with the Black-throated Green, Black-Throated Grey, Golden-cheeked and Hermit Warblers, and all of which form a super-species. Members of this group have distinctive black throats and all, except for the Golden-cheeked Warber - have green backs for which this group was named.

These migratory birds breed in the coniferous forests of western North America and most of them migrate south to Mexico or Central America for the winter.

These warbler breed from southern Alaska and northwestern Canada - south from the Yukon Territory, east to southern Alberta - south into the USA to Oregon and Idaho.

Resident (non-migratory) populations exist in the highlands of Mexico and Central America.

These birds prefer dense, coniferous and mixed coniferous-deciduous forests, but may also be found in chaparral, suburban gardens and parks.

Dynamic map of eBird sightings (View sightings and enter your own)

Juveniles resembles the females of this species, except they have dark green caps and cheeks; they lack the blackish markings on the throat and have indistinct streaking on their backs.

The Townsend Warblers can most easily be confused with the Black-throated Green Warblers, the Hermit Warblers and the Golden-cheeked Warblers - all of which are believed to have evolved from the same ancestral stock.

Females and juvenile birds look quite alike, and identification is mostly done by comparing the breeding males of these species.

On their breeding grounds, these warblers mostly feed on insects, such as caterpillars, beetles, leafhoppers and spiders; and seeds.

Within their wintering range in Mexico and Central America, the greater part of their diet consists of berries and honeydew nectar excreted by sap-sucking scale insects.

Insects are either caught in flight or gleaned from foliage high in the forest canopy. To a lesser extent, they may forage low in bushes and shrubs, or may pursue prey on the ground - particularly in places where there are patches of their favorite honeydew-producing insects.

They will also visit bird feeders in urban gardens for seeds and suet. They particularly like peanut butter.

In winter, they are often seen foraging in flocks. During the breeding season, they are mostly seen alone, in pairs or small family flocks.

These birds defend their favorite territories against other Townsend's Warblers as well as other bird species.

Townsend’s Warblers typically breed in denser forests of grand fir, Douglas fir and Engelmann spruce. In the Pacific Northwest they nest in montane spruce-fir (Picea-Abies) forests; and in Alaska and the Yukon Territory in Canada, their breeding grounds are boreal forests.

Their shallow cup nests are constructed out of small twigs, dried grasses, grass stems, cedar bark, pine needles, lichens and spider cocoons; and they are lined with fine grasses, moss, feather down or hair.

These nests are often found on the end of high branches of coniferous trees in areas where they are well concealed by foliage. On occasion, females were observed partially constructing nests at one location and then moving the material to other trees to finish their nests there.

A clutch may consist 3 up to 7 eggs; but mostly the average nest has 4 - 5 eggs. The eggs are whitish with brown speckles. The incubation period is believed to be about 12 days.

The helpless hatchlings only have tufts of down and require parental care for survival. Both parents feed and protect them. The young fledge when they are about 10 days old.

Calls: a sharp tups or a soft chip.