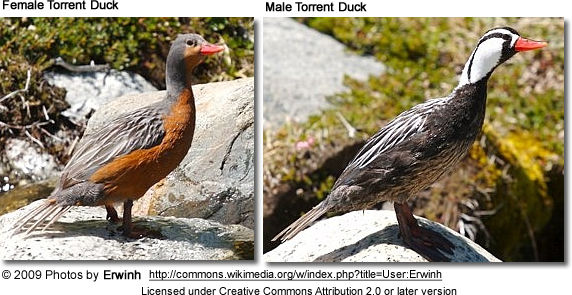 The Torrent Ducks (Merganetta armata) are resident breeders in the Andes of South America, where they nest in small waterside caves and other sheltered spots. They are usually found along fast flowing mountain rivers, and usually remain at elevations of 5,000 feet (1500 m) or above.

Thesepowerful swimmers and divers navigate with easy through fast rivers, but are not skilled fliers and only fly for short distances. They are not usually shy when approached. 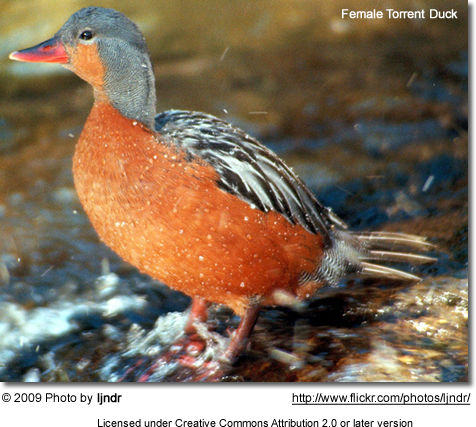 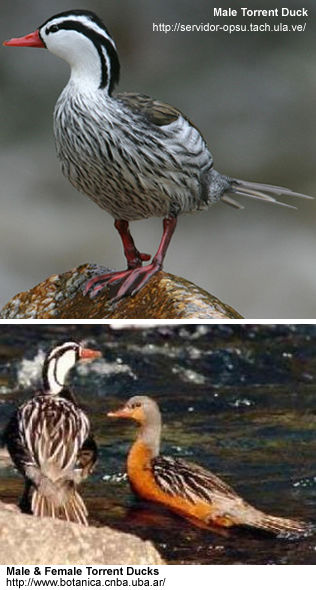 Male Torrent Ducks are 43 to 46 cm long and have a striking black and white head and neck pattern and a red bill. In flight they show dark wings with a green speculum (= distinctive wing patch) .

Females of all subspecies are somewhat smaller than the drakes; they have orange underparts and throat, with the head and upperparts grey and a yellower bill.

Juveniles are pale grey above and whitish below.

The male's call is a shrill whistle, and the female's is throatier whistle.

The numbers of the Torrent Duck are declining due to environmental pollution, habitat destruction, damming of mountain rivers for hydroelectric schemes, and competition for food from introduced trout.

However, the Chilean population appears to be relatively stable.