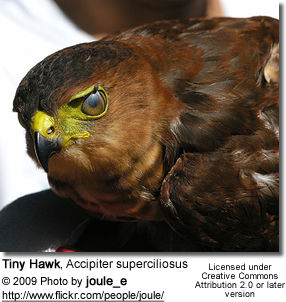 The Tiny Hawk, Accipiter superciliosus, is a small diurnal bird of prey found in forested and edge areas throughout much of the central neotropics. It is primarily a bird-eater, and is known to prey on hummingbirds.

There are two subspecies of Tiny Hawk, separated by the northern Andes. The two differ most significantly in relative tail length; differences in size and color are small, and can be hard to distinguish. 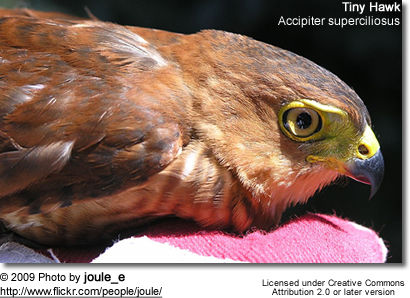 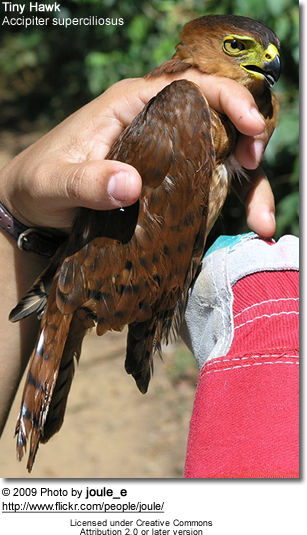 The Tiny Hawk is aptly named; males measure a mere 20 cm (eight inches, or about the size of a Turdus thrush), though females are slightly larger at 26.5 cm (10.5 in). The birds range in weight from 75–120 g (0.17–0.26 lb). As with most raptors, there is considerable sexual dimorphism in size, with females measuring 5–26 percent longer and as much as 60 percent heavier than males.

The adult male Tiny Hawk is dark slaty gray above, with a mottled gray face, a paler gray supercilium, and a blackish crown and nape. The white underparts are covered with fine gray barring, except on the unmarked throat. The longish tail is dark with three paler gray bands. Adult females are similar, but browner above with buffier underparts and browner barring below.

Immature birds come in two color morphs: the more common brown and the much rarer rufous. Brown morph (genetic mutation) birds are dark brown above, finely barred with black, and buff below, heavily barred with cinnamon. Rufous morph immatures are more chestnut above, and barred with rufous (rather than cinnamon) on the underparts. They also have duskier heads and brighter rufous tails than do brown morph birds.

The cere (soft skin surrounding the nostrils) and legs of all ages are yellow, and the bill, which is relatively heavy, is gray. Adults have red or red-brown irises, while those of immatures are yellowish.

Unlike most accipiters, the Tiny Hawk's tail is quite short; it is squared or notched at the tip. Its wings are medium-length, with pointed tips, and its legs and toes are long.

Tiny Hawks are patchily distributed from eastern Nicaragua down to western Ecuador, northern Bolivia, northern Argentina, Paraguay and southern Brazil. They frequent humid and wet lowland forests (including second growth) and forested foothills from sea level to about 1800 meters (5900 ft), though most records come from elevations below 1000 m (3300 ft).

The species is believed to be fairly sedentary.

On clear mornings (and occasionally in late afternoons), the Tiny Hawk will sometimes sun itself on a high open branch. Occasionally, pairs will sun together. Otherwise, this is a secretive species and easily overlooked. It generally hunts from a perch, located anywhere from the undergrowth to the canopy, though most often in the middle story.

When hunting in low growth, it often flashes from one perch to another in rapid succession. It is a fast flier; instead of the typical flap-flap-glide cadence of the accipiters, it makes a few quick flaps and then briefly closes its wings before flapping again. Tiny Hawks occasionally soar above the forest canopy.

Like all accipiters, the Tiny Hawk feeds primarily on birds. It hunts hummingbirds and small passerines, typically darting out from a place of concealment to snatch them as they pass by, but also ambushing them when the smaller birds are perched. There is some evidence that it learns the regular perches of some hummingbirds and hunts for them there. Some individuals also hunt rodents.

Little is known about the Tiny Hawk's breeding biology. Their breeding season may vary depending on their location; from Panama to Colombia, it apparently runs between February and June, while in the southern part of the range, it may range from October to January. They are known to build stick nests, at least sometimes in the canopy of tall trees. In Venezuela, there is a record of a pair nesting in an old Black-collared Hawk nest. Females lay one to three bluish-white eggs, faintly streaked and spotted with brown. Incubation and fledging periods are not known.

The call of the Tiny Hawk is a shrill, high-pitched, somewhat quavery series of 20–30 notes of uneven pitch. After an initial few accelerating notes, the call settles into a steady rhythm, variously transcribed as caucau-ca-ca-ca, keer-keer-keer or kree-ree-ree-ree.