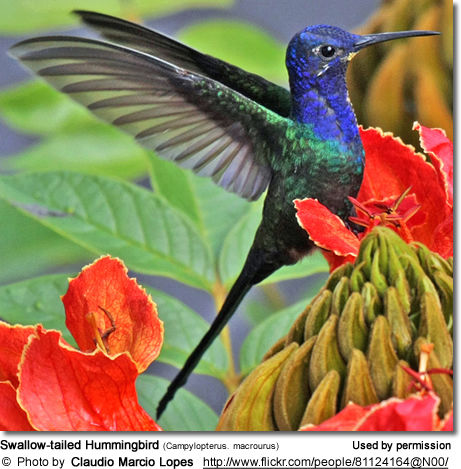 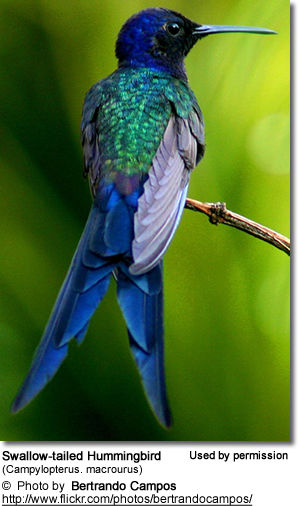 The Swallow-tailed or Cayenne Fork-tailed Hummingbird (Campylopterus macrourus) is also known as Common or Brazilian Swallowtail. Its common name was derived from its long, deeply forked, somewhat swallow-like tail.

Some authorities place this species in the genus Eupetomena, but based on its song structure and enlarged shafts of the male's first primary flight feathers it is now mostly considered to be part of the Campylopterus. 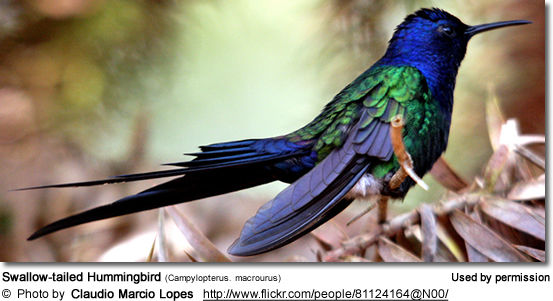 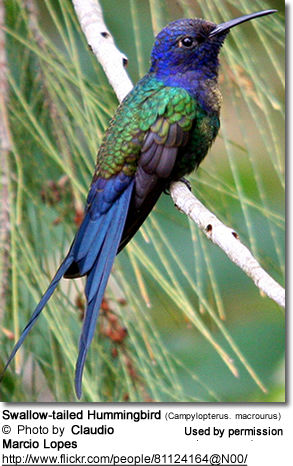 They are mostly resident (non-migratory), but some may travel north or south a short distance during the dry winter months.

This species is among the commonest species throughout most of its range. However, it is generally is uncommon to rare in the outlying regions, particularly where it is humid.

Conservation: Up to 1970, these birds were exported for the cage trade; however, this species is now protected under CITES Appendix II, which restricts its trade.

The Swallow-tailed Hummingbird is one the largest hummingbird within much of its range - measuring 6 - 6.5 inches or 15–17 cm including beak and tail. Nearly half of its length is made up by its tail. Its wings are close to 3.15 inches or 8 cm long. However, its slightly down-curved black bill is only of 2.1 cm or 0.83 inches. It averages 0.32 oz or 9 g in weight.

Males: The plumage is mostly a brilliant iridescent green; except the head, upper chest, tail and vent are a deep blue-violet; and the remiges (flight feathers) are blackish-brown.

The tiny white spot behind the eye is common among hummingbirds; however, it is often not visible in the Swallow-tailed.

They have well-developed white ankle tufts. The dark blue tail is long and deeply forked,

Females resemble males; except females are about one-fourth smaller than males and their plumage is slightly duller.

Juveniles look like females, but the head is particularly dull and brownish-tinged.

Similar Species: Could be confused with the male Violet-capped Woodnymph (Thalurania glaucopis); however they can be distinguished by their blue caps. 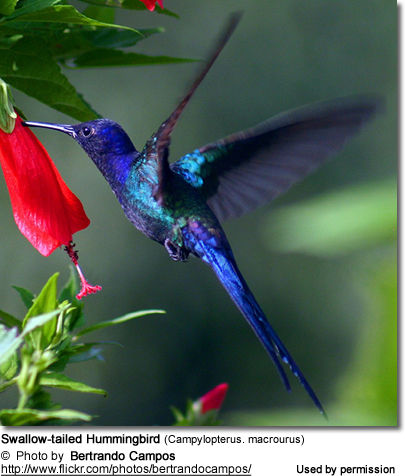 The nominate race and the subspecies Campylopterus macrourus simoni occur over a wide range. The other subspecies are more localized. 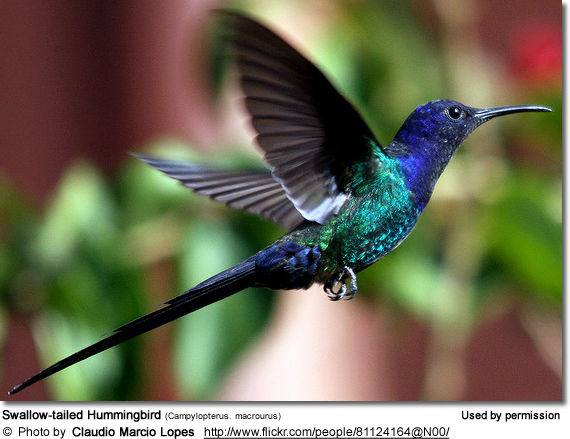 Their vocalizations include loud psek notes and weaker twitters. When alarmed or excited, tik calls can be heard.

They breed throughout the year; however, most nest activities occur from July and September, and then again in December.

The female is responsible for building the cup-shaped nest out of plant fibers woven together and green moss on the outside for camouflage in a protected location in a shrub, bush or smallish trees - typically below 10 ft (3 m), but occasionally as high as 50 ft (15 m) above the ground. She lines the nest with soft plant fibers, animal hair and feather down, and strengthens the structure with spider webbing and other sticky material, giving it an elastic quality to allow it to stretch to double its size as the chicks grow and need more room. The nest is typically found on a low, thin horizontal branch.

The average clutch consists of one white egg, which she incubates alone for about 15 to 16 days, while the male defends his territory and the flowers he feeds on. The dark-skinned young are born blind and immobile, and only have some grey down on the back. The feathers start emerging about 5 days or so after hatching they start to grow feathers five days or so after hatching, starting with the flight feathers on the wings (remiges). The long flight feathers of the tail (rectrices) begin to emerge about three days later.

The female alone protects the chicks. In a study of a nest in urban São Paulo, it was noted that the Swallow-tailed mother drove away Ruddy Ground Doves attempting to nest nearby. Even though the Ruddy Ground Drove themselves didn't present a danger to the young, these birds attract carnivores and by chasing them away, the hummingbird reduces the risk of predators coming closer to the nest and preying on her young.

During the breeding season in particular, they will"dive-bomb" birds twice their size. When they are disturbed by much larger birds such as Guira Cuckoos or hawks, they usually only give warning calls, however, one female Swallow-tailed hummingbird has been observed to actually attack a Swainson's Hawk – weighing more than a hundred times as much as a hummingbird – in mid-air. Warning calls are also given at other animals (mammals), including humans. Although in an urban environment, they have learned to tolerate human observers even when nesting; as long as they keep distance of 30 feet (10 meters) or more from the nest.

The female feeds the young with regurgitated food about 1 to 2 times an hour (mostly insects since nectar is an insufficient source of protein for the growing chicks). As is the case with other hummingbird species, the chicks are brooded only the first week or two, and left alone even on cooler nights after about 12 days - probably due to the small nest size. The chicks leave the nest when they are about 22 - 24 days old but will return to the nest to sleep for some more days. The will be independent about 2 -3 weeks after fledging. The young are of breeding age when they are about 1 to 2 years old.

The female may raise two broods in a season, sometimes reusing the nest. 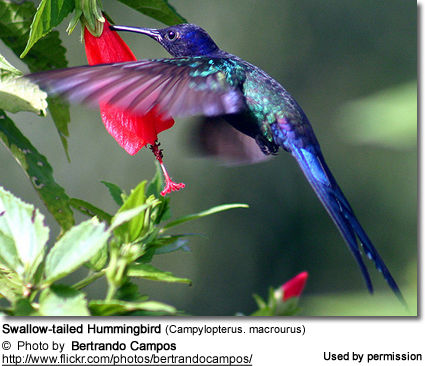 They primarily feed on flower nectar taken from a variety of brightly colored, scented small flowers of trees, herbs, shrubs and epiphytes, such Fabaceae, Gesneriaceae, Malvaceae (especially Bombacoideae and Malvoideae), Myrtaceae, Rubiaceae and epiphytic Bromeliaceae. They are not specialized feeders, however, and may also take the nectar of related families, such as Asteraceae or Caryocaraceae. They feed on native plants as well as introduced ornamental plants.

They mainly forage at mid-levels, but good food sources are taken advantage of from anywhere near ground level right up to the tree tops.

They are commonly attracted to hummingbird feeders; and may also drink out of bird baths or water fountains where they will either hover and sip water as it runs over the edge; or they will perch on the edge and drink - like all the other birds; however, they only remain still for a short moment.

Males establish feeding territories, where they aggressively chase away other males as well as large insects - such as bumblebees and hawk moths - that want to feed in their territory.

They aggressively use aerial flights and intimidating displays to defend rich food sources from other nectar-feeding birds. These large hummingbirds are generally dominant over other hummingbird species. However, even much larger birds are attacked by them. 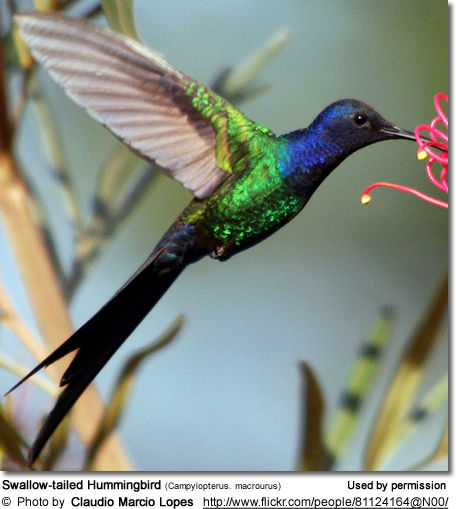 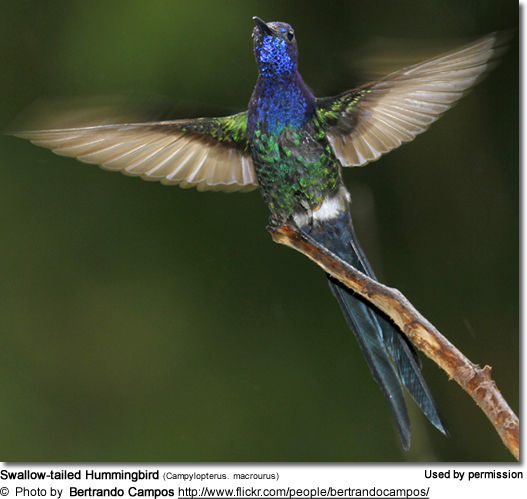 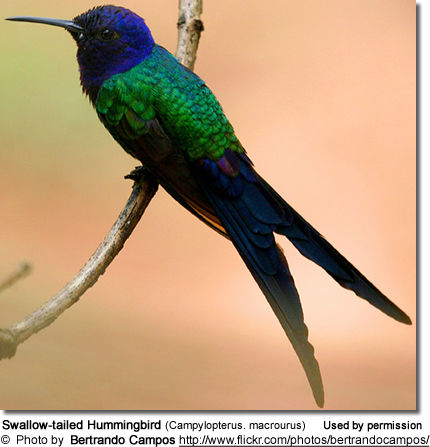