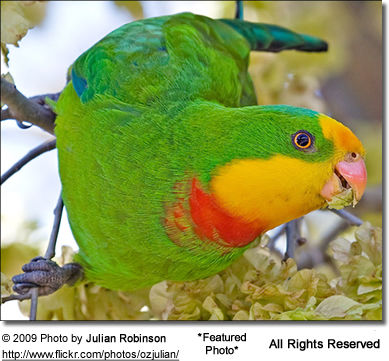 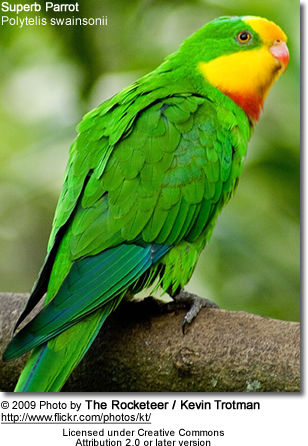 The Superb Parrot (Polytelis swainsonii) is also known as Barraband's or Barraband's Parakeet, which leads to easy confusion with the Orange-cheeked Parrots (Gypopsitta barrabandi aurantiigena), which is also commonly referred to as Barraband's Parrot. Another name this parrot is known for is the Green Leek Parrot -- this name applies to several unrelated species.

This species was first described by French naturalist Desmarest in 1826. Its closest relative is the Regent Parrot.

Their life expectancy is about 25 years.

Superb Parrots are endemic to southeastern Australia, where they are restricted to the dry (sclerophyll) woodlands of New South Wales and northern Victoria provinces. They prefer to stay in forests or tree-dotted grassland areas near water.

It is estimated that only about 6500 adult individuals can be found in the wild. They are threatened by ongoing habitat loss and limited range, and is therefore evaluated as Vulnerable on the IUCN Red List of Threatened Species. The "accidental" logging that occurred in 2005 in the Barmah State Forest destroyed 60 percent of the nesting colonies of the Superb Parrot, which has severely compromised their chances of survival. In 2008, dozens of reports were filed of Superb Parrots being hit by cars. (Please refer to: Superb Parrots become Road Kill.) Wildlife officials speculated that the parrots had gorged on grain spilled from an uncovered truck and became unable to move, eventually being hit by automobiles.

In their natural habitat, farmers regard them as pests, as these parrots love to feed on their crops -- however, the Splendour Parrot is very popular with the aviculturists, as they are beautiful, peaceful and quiet aviary inhabitants. 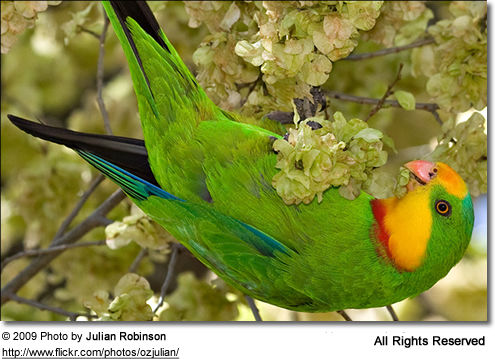 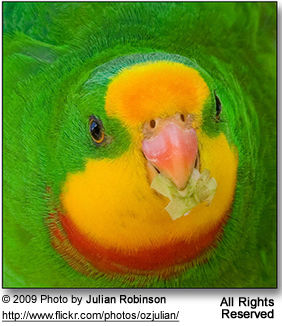 Superb Parrots are very quiet in an aviary, with an endearingly friendly and gentle personality. They are highly social and should be kept with a mate or in a group environment. They acclimatize fairly easily to a new environment and are very hardy. Talking Abilities (compared to other species).

In the wild, Superb Parrots are almost always found in flocks.

The medium-sized Superb Parrot, Polytelis swainsonii, averages 15.5 to 16 inches (~40 - 45 cm) in length and is predominantly green with long tail feathers. It is yellow-green below.

"In fact the green parrot doesn't have any green pigment on it. The microscopic ultrastructure of the feathers gets white light and bends it into green so that the brighter the day is the greener parrots look. So on a sunny day the bird looks like it has a light inside of it."

The adult male has a bright red band across the upper chest, a bright yellow face and throat, and a slight blue tinge to their napes (lower back of the neck). His primary flight feathers have a blue outer webbing, and the long, pointed tail has a blackish underside. His upper tail is yellow. 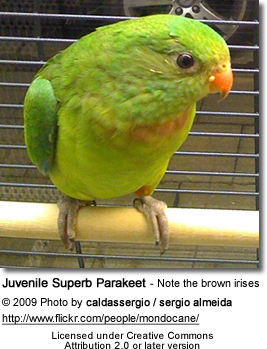 The female has an overall duller plumage and lacks the male's red and yellow markings. She has a pale blue-green face, greyish-green throat, a variable tinged russet-pink fore-throat, and orange-yellow thighs. Her under-tail feathers are pink tipped.

Immature birds look like females, but have brown irises. The young male obtains his adult plumage when he is about one year old.

If it is important to identify the gender in juveniles, surgical or DNA sexing is required prior to sexually maturity (about 2 years). 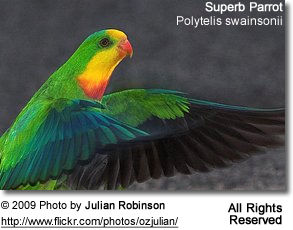 Captive Superb Parrots should be provided with a balanced diet of grains, seeds, nuts, fresh fruits and vegetables.

Superb Parrots spend a lot of time on the ground foraging for food; therefore they need to be wormed regularly. They are also susceptible to foot problems and eye infections.

As far as pet potential is concerned - the males of these species are generally better suited than females.

The Superb Parrots should be kept in a roomy aviary that allows them to fly. Please refer to the following websites for valuable information: 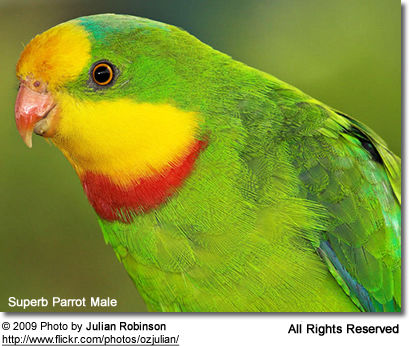 In the wild, Superb Parrots nest on hollow tree limbs or in the holes of trees. Pairs may nest in a loose colonial system of as many as 6 pairs.

Males perform courtship displays to attract females. These nuptial displays include raising head and feathers slightly and staring at her with contracted pupils.

During breeding season, small flocks of males often forage for food alone, and then return to the nest to feed their females and any young.

They may produce up to two clutches a year, each clutch averaging four to six eggs which are incubated for 20 - 22 days.

The best breeding results are achieved when Superb Parrots are housed as a single pair in an aviary approximately four to six meters long and one to two meters wide. A much larger aviary is required if these birds are to be bred using the colony system. Superb Parrots have been known to have a breeding life of up to twenty years when kept in peak condition.

They require a nesting box (cockatiel or lovebird-sized works fine) or hollow log of at least 8 inches (20 centimeters) in diameter. In the wild, they nest on hollow limbs or tree holes.

Soft insect food is often fed to the adults to help them feed their young. The chicks fledge from 35 to 45 days and are independent by 50 days.

Immature Superb Parrots have similar coloring to the females, but have brown irises, and they acquire their adult coloration when they are six to ten months old. Females are sexually mature at one year of age and males at two years.

The Splendour Parrots are very quiet in an aviary, with an endearingly friendly and gentle personality. They are highly social and should be kept with a mate or in a group environment. In the wild, Superb Parrots are almost always found in flocks. They acclimatize fairly easily to a new environment and are very hardy ... They are quite compatibility with most other species. Males are said to be suitable as pets, but not so much the females. Males can learn to imitate human speech (but modestly so).

Talking Abilities (compared to other species).