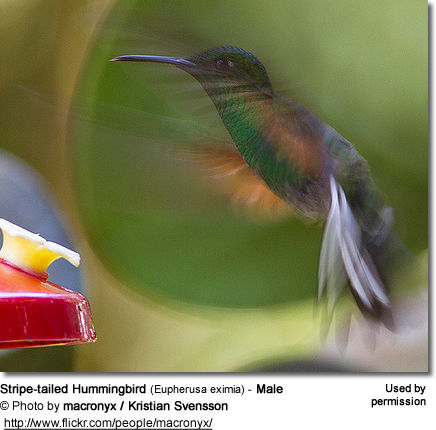 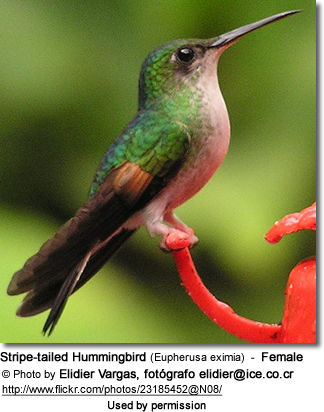 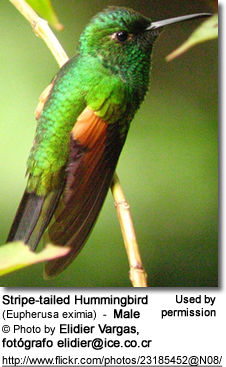 They are closely related to the Mexican Blue-capped Hummingbirds (also known as Oaxaca Hummingbirds) and White-tailed Hummingbird (Eupherusa poliocerca), which are sometimes considered subspecies.

They are mostly found in pre-montane and lower montane forests and adjacent clearings. 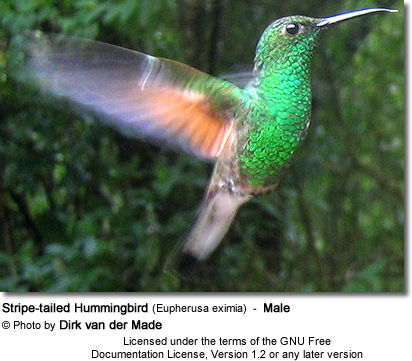 Range: Found in the highlands of Costa Rica and western Panama. 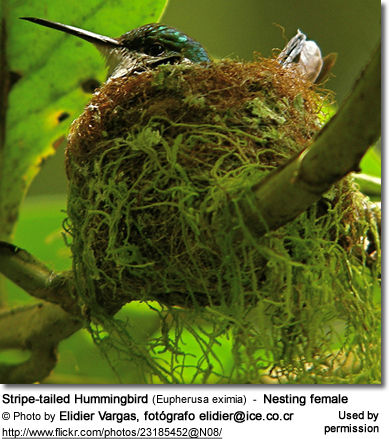 Males have a mostly metallic green plumage, except for conspicuous bronzy upper wing patches, whitish vent and two pairs of the two pairs of the long flight feathers (rectrices) on the side of the tail have white inner webs and black or partly black outer webs. 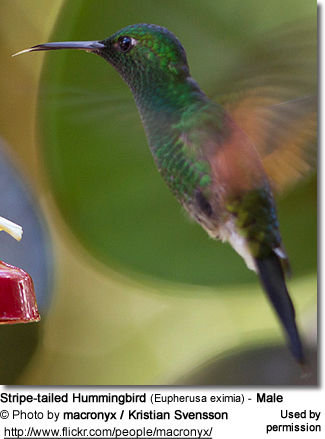 The Stripe-tailed Hummingbirds primarily feed on nectar taken from a variety of brightly colored, scented small flowers of trees, herbs, shrubs and epiphytes.

The female is responsible for building the bulky cup-shaped nest out of plant fibers woven together and green moss on the outside for camouflage in a protected location. She lines the nest with soft plant fibers, animal hair and feather down, and strengthens the structure with spider webbing and other sticky material, giving it an elastic quality to allow it to stretch to double its size as the chicks grow and need more room. The nest is typically found on a low, thin horizontal branch.

The average clutch consists of two white eggs (about the size of coffee beans), which she incubates alone for about 15 - 19 days, while the male defends his territory and the flowers he feeds on. The female alone protects and feeds the chicks with regurgitated food (mostly insects since nectar is an insufficient source of protein for the growing chicks). As is the case with other hummingbird species, the chicks are brooded only the first week or two, and left alone even on cooler nights after about 12 days - probably due to the small nest size. The chicks leave the nest when they are about 20 - 26 days old.