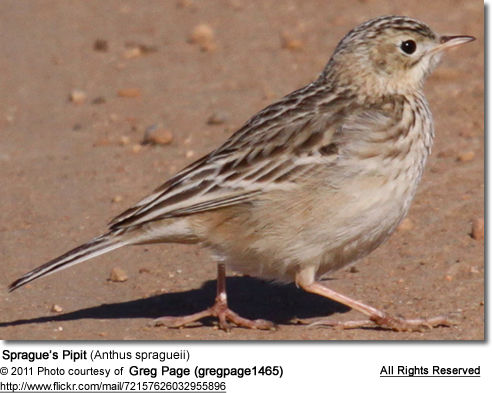 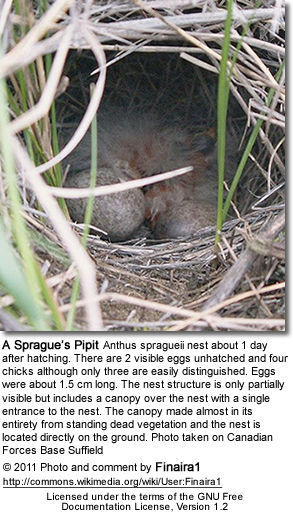 The Sprague's Pipit (Anthus spragueii) is a small passerine bird that breeds in the short and mixed-grass prairies of North America and overwinters in the southwestern United States and northern Mexico.

Easiest to identify by the distinctive descending call that is delivered in the breeding season from a considerable height.

Males and females are cryptically colored and similar in appearance and are a buffy brown with darker streaking, slender bills and pinkish to yellow legs.

Found in mixed or short grass prairie throughout the Northern Great Plains of North America. In Canada, you can find Sprague's Pipit in Alberta, Saskatchewan, and Manitoba. In the United States, they can be found in Montana, North Dakota, South Dakota, and Minnesota.

They breed in habitat with minimal human disturbance, such as grazing, haying or other human development. Sprague's Pipit is a ground nesting passerine and standing dead vegetation is used to build the canopy over the nest.

Sprague's Pipits overwinters in the southwestern United States and northern Mexico. In the United states it occurs from southern California (casually), south-central and southeastern Arizona, southern New Mexico, central and eastern Texas, southern Kansas, southern Oklahoma, southern Missouri, Tennessee and northwestern Missisissppi south through Arkansas and Louisiana (A.O.U. 1998). In Mexico it is fairly common to common in the interior from northeastern Sonora and Nuevo Leon south to Zacatecas and San Luis Potosi and along the Atlantic Coast from Tamaulipas to central Veracruz. It is uncommon in the Central Volcanic belt, rare in west Tobasco and a vagrant to s Guerrero (Howell and Webb 1995). 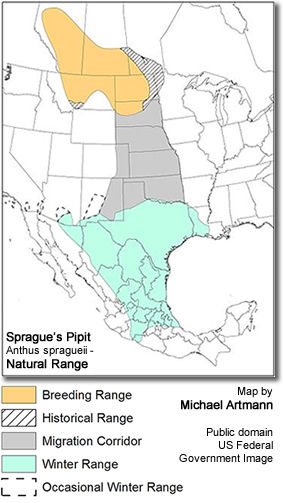 Breeding begins as early as late April and continues until mid to late August.

During the courting ritual, the displaying males frequently remain airborne half an hour up to a few hours - before descending to the ground. This is the longest display known to be performed by any other bird species.

Nests are a small cup of grass found on the ground with standing dead vegetation folded over to create a canopy. There is a single entrance to the nest. Four to six eggs are typically laid within the nests with an average incubation time of 13–14 days.

Can rear multiple broods in a summer although not all pairs will do so.

Sprague's Pipit's eat various insects, spiders, and sometimes seeds. During the breeding season the adults are almost entirely insectivorous and feed the young on insects as well.