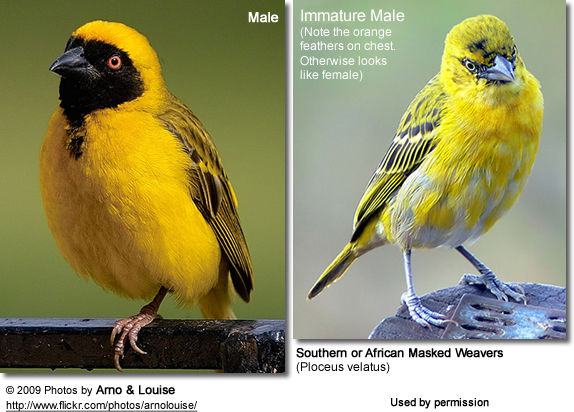 The Southern Masked-Weavers or African Masked-weavers (Ploceus velatus) is common throughout southern Africa, where they occur in a wide range of habitats, including shrubland, savanna, grassland, open woodland, inland wetlands and semi-desert areas. They are also found in suburban gardens and parks.

Non-breeding Male: Looks like female, except heretains his red eyes.

The female has a pinkish-brown bill, brown or red-brown eye and is dull greenish-yellow, streaked darker on the upper back. Her throat is yellowish, fading to off-white on the abdomen.

The call is a harsh swizzling, similar to other weavers. It also utters a sharp chuk alarm note.

The breeding season usually stretches from September through January.

Village or Spotted Back Weavers are territorial colonial nesters, with colonies of about 10-300 breeding males. Males will mate with up to 5 females (average 2) per breeding season.

The males are responsible for building the nests, which are never used more than once. Each male builds a series of nests - typically 25 each season. It takes him about 9 to 14 hours to complete one. Nests are typically attached to the thin branches of free-standing trees, often over water to discourage predators.

The nest is usually woven from green strips of reeds, grass leaves or palm blades and once completed is a kidney- shaped structure with a large entrance on the underside.

The Southern Masked Weavers mostly eat insects, such as Coleoptera (beetles) m termite alates, ants and locusts (Orthoptera), gleaning them from the ground and foliage and catching termite alates in mid-air ("hawking"). The percentage of insects in their diet increases during the breeding season, especially when feeding young.

Southern Masked also feed on seeds and grain, and in some areas are considered crop pests. They will also take advantage of human offferings, readily accepting picnic table scraps.

Southern Masked Weavers are preyed upon by various birds of prey, such as Little Sparrowhawks, African Harrier-hawks, Gabar Goshawks; as well as Purple Herons and Pied Crows. Snakes, such as Dispholidus typus (Boomslang) and the Python sebae (African rock python) will mostly prey on their eggs and the young, but will also take adults roosting in their nests.