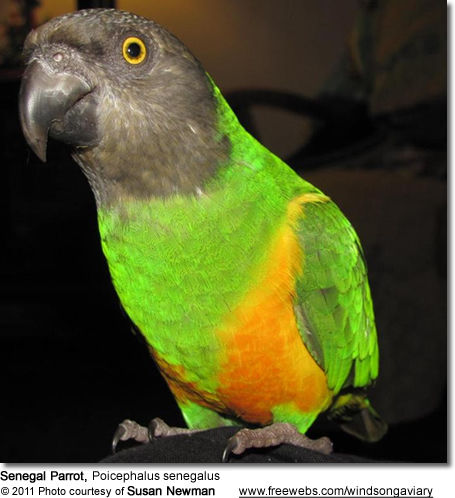 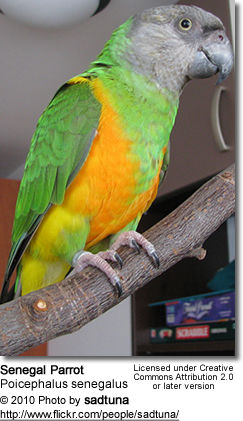 The Senegal Parrots (Poicephalus senegalus senegalus) are probably the best known and most popular members of the entire Poicephalus family, which includes Meyer's, Red-bellied, and Jardine's Parrots.

These compact and very playful African parrots are frequently seen in pet shops around the USA and Europe, where they were heavily imported until their importation became illegal in 1992.

Senegal Parrots have a life expectancy of 20 - 30 years; however, some captive birds have been recorded to have lived close to 50 years.

The nominate species "Senegal" was named after its country of origin in western Africa - although they also occur in the adjoining countries, as far south as the northern Cameroon and Central African Republic.

Within its natural range, it undergoes local seasonal migrations, driven mainly by the availability of fruit, seeds and blossoms which make up a large part of its diet. These social parrots usually occur in flocks and inhabit open moist woodland and the edges of the savannah.

In the pet trade, the nominate subspecies is the most common though all three are raised and sold as pets.

Three subspecies are generally recognized - they do not differ in behavior, but can easily be identified by the color of their abdomen. 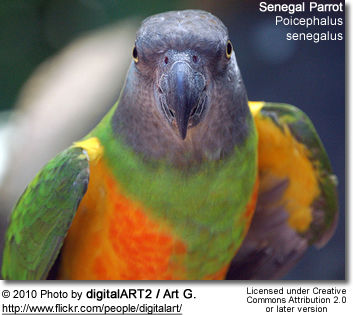 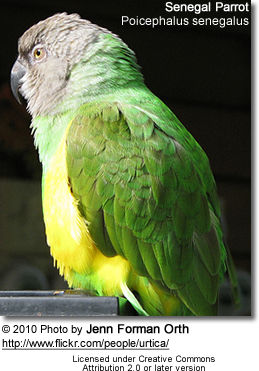 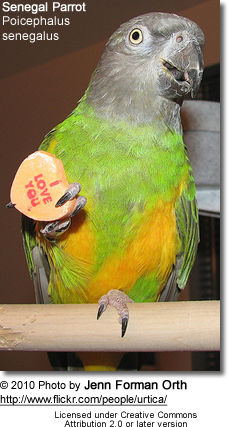 They have a relatively large head and beak for their overall size, and they have a short broad tail.

The Adult Senegal parrot has a charcoal grey head; green wings, back and throat; and the lower rump and the breast and abdomen have a distinct yellow to orange v-shaped section - sometimes known as the vest - with the upper breast being a bright green. 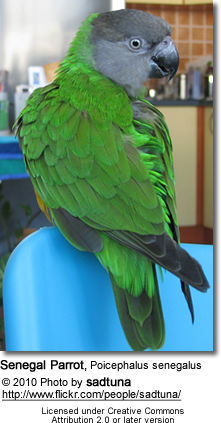 A rare yellow as well as pied-colored Senegal Parrots have occurred in captivity. Mutation Photos

Males and females look alike; however, some theories have been developed to sex these parrots visually. The three most successful ones are listed on top: 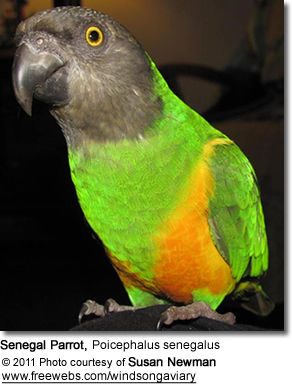 Any of the above method is not proven by any means and the only reliable methods are surgical or DNA sexing. DNA sexing is relatively inexpensive (from $15 to $30 per bid) and kits can be obtained via mail order (the previous link provides relevant information). The general instructions are to obtain either a feather or blood sample from a bird (often done by cutting a nail too short) and catching a drop of blood in a provided capillary tube provided that is then returned to the laboratory for testing. Sexing result can often be accessed online only days later.

This is a gregarious species whose vocalizations consist of a continuously chattering with a range of whistling and squawking calls, as well as harsh and high-pitched screeches, which turn more raucous when excited.

However, it is still considered relatively quiet when compared to many other parrot species, which is one of the reasons why this parrot has grown so much in popularity. 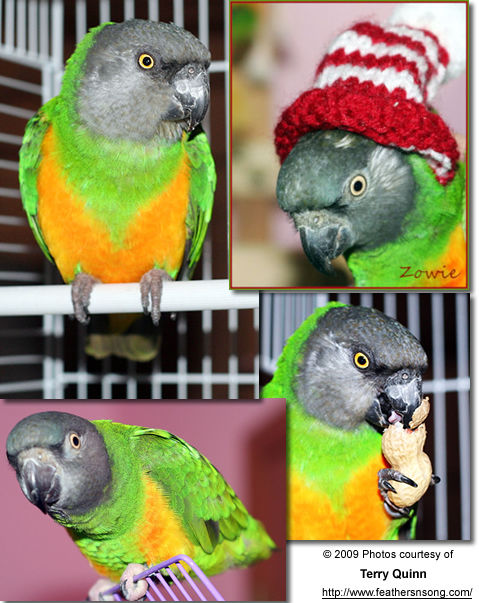 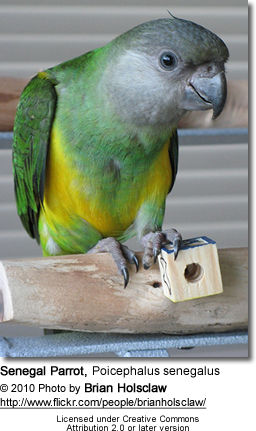 Description: As senegalus above, but green to back and wings generally darker; lower breast and abdomen yellowish-orange with orange-red centre to abdomen. ... Length: 23 cm (9 ins)