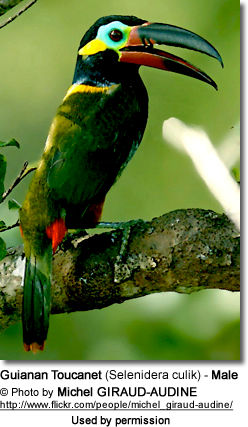 The Genus Selenidera contains six tropical South American species of toucanets - one ranging south into Central America. They inhabit lowland rainforests below 1500m. These elusive toucans tend to forage alone or in pairs and generally keep to dense cover. The Selenidera toucanets are largely sedentary.

Unlike most other toucans, males and females can be visually identified. The males have a black crown (top of the head), nape (lower neck at the back), throat and chest. They have an orange / yellow streak across the ears.

The females of most species have those areas that are black in the male replaced by a rich brown. They lack the streak across the ear that can be seen in the male.

Exceptions are as follows:

The female Guianan Toucanet, has a grey under plumage and a rufous collar at the nape.

The female Yellow-eared Toucanet looks like the male of this species, except for her brown crown and lack of an ear streak.

They are generally quiet. Their calls are low-pitched and croaking.