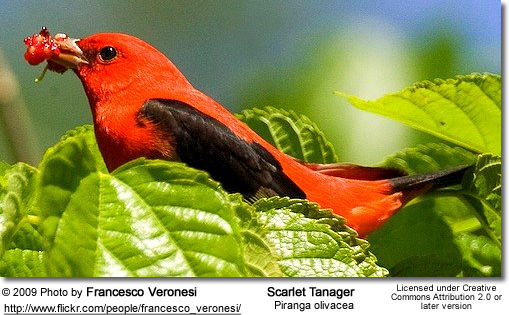 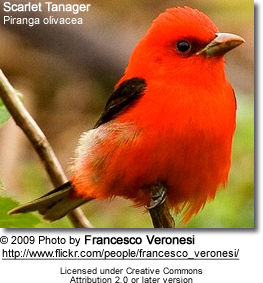 The Scarlet Tanager, Piranga olivacea, was formerly placed in the tanager family (Thraupidae), but is now now classified in the cardinal family (Cardinalidae).

The Scarlet Tanager is about 7 in. (18 cm) long. Adults have pale stout smooth bills.

Adult breeding males have a brilliant scarlet plumage with black wings and tail. Each fall, the male Scarlet Tanager changes his strikingly beautiful red and black plumage to a more drab olive green pretty much the same as the female Scarlet Tanager's plumage; although the wings and tail remain darker. Young males briefly show a more complex variegated plumage intermediate between adult males and females.

Females are yellowish on the underparts and olive on top, with olive-brown wings and tail. 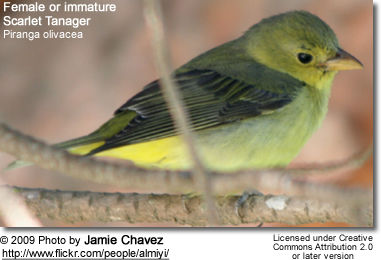 The scarlet tanager has the widest range in the United States.

They winter in nothwestern South America, arrive in U.S. through April, and move into the northern U.S. and Canada by early to mid-May. Their breeding habitat is large forested areas, especially with oaks, across eastern North America. They begin arriving on the breeding grounds in numbers by about May and start to move south again in mid-summer. By early October they are all on their way south.

This bird is an extremely rare vagrant to western Europe.

These birds do best in the forest interior, where they are less exposed to predators and nest parasitism by the Brown-headed Cowbird. Their numbers are declining in some areas due to forest fragmentation.

Breeding occurs from May to August.

Females build shallow, saucer-shaped nests on a horizontal tree branch from twigs, rootlets, coarse grass, and weed stems, and line them with fine grasses and pine needles. They are placed anywhere from 4-75 feet above ground. Four to five pale blue-green eggs with brown speckles are incubated for 13-14 days. Though they are brooded by females only, both parents bring food to the nest. The nest is kept clean and the droppings are swallowed or carried away in the bill.

The young are able to leave the nest about 9-15 days after hatching.

These birds are often hidden - foraging high in trees. Sometimes they are observed flying out to catch insects in flight.

Their diet consists of insects (beetles, bugs, butterflies, moth, grasshoppers, locusts) and some fruit, such as mulberry and blackberry.