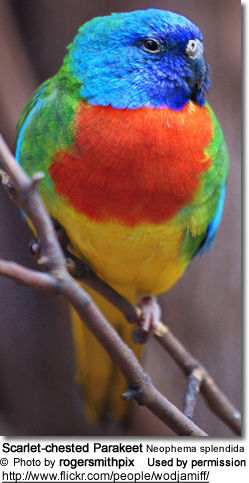 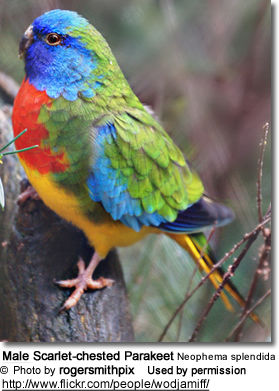 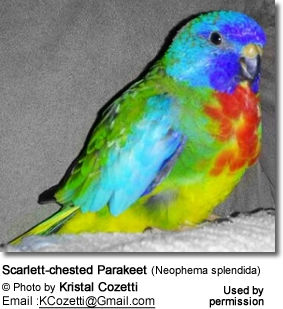 In nature, they feed on the ground and fly low, keeping close to cover.

The mature males can easily be identified by their red or "scarlet"-colored chests - from which their common name was derived. The females and juveniles have a duller plumage without the bright red markings of the male. 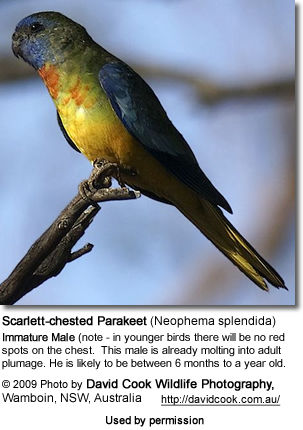 Scarlet-chested Parakeets are very popular in aviculture for a combination of reasons. In addition to their beautiful plumage, these birds are generally peaceful and quiet. As pets, they are appreciated for their sweet disposition.

They will breed well in any parakeet-sized nesting box, usually twice a year (spring and autumn). An average clutch consists of 3 to 6 eggs which are incubated for 18 to 20 days. They may produce two, and under optimal conditions, even 3 clutches a year. Pease refer to this website for additional information on care and housing.

On occasion I would handfeed the babies, and it was so much fun to take care of them. They are so trusting, loving and quite adorable.

I have moved and no longer own them, but am dreaming of having another aviary in the future -- and these, together with other grass keets, will be on the top of the list.

One thing that I have learned is very important is the aviary set-up. As they spend a lot of time on the floor, they can get a heavy burden of parasites / worms. Easy-to-clean concrete floor would be the only option for me -- however, they do like planted aviaries: potted plants / trees would be recommended. Edible / non-toxic - to provide them with a fresh supply of greens.

The Scarlet-chested Parakeets are readily available throughout most of the United States and come in several color mutations. 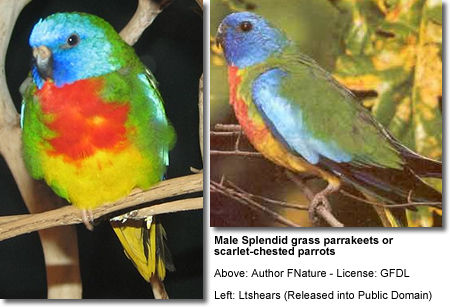 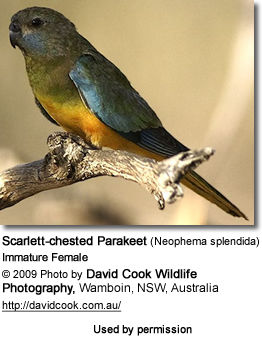 The below information courtesy of Mandy and Paul - Breeder of Canaries and Other Exotic Birds - Singing Wings Aviary - www.singing-wings-aviary.com (A great source for these colorful parrots)

Often considered one of the most colorful species of grass parakeets, in the normal form they have a bright blue color face and wing converts which receed to a little blue color. The back and rump are deep green while the underbelly is yellow.

The chest is a scarlet red on males but on the hens it remains a green-yellow. Males will also have a much brighter blue facial color which extends to the nape of the neck. Juveniles resemble hens but young males will molt into adult color from 3-6 months of age. This species is often confused with the Turquoise Parakeet. Though very similar the Turquoise males male have red on the wings and yellow chest unlike the Splendid males which have no red on the wings and a red chest.

Sexing young birds can prove difficult unless DNA sexed as all young birds resemble hens. However at about 3 months of age males will begin to molt into adult plumage and red specks can be seen on the chest. Since hens do not have red chest you will know these young birds are males. From the photo you can see the young male on the right and hen in the upper left.

There are several mutations of the Splendids available though rare in the USA such as Pastel, Cinnamon, Fallow, Sea Green, Lutino, Albino, Pied, Silver, Blue, White Breasted Blue and Red Bellied although higher in cost in my opinion they are not as colorful as the original form.

A good splendid diet should include a mixture of canary seeds and millets along with safflower and some sunflower seeds. Kale, boiled egg, spray millet, brocolli, grated carrot, corn and chopped apple can also be offered.

We have offered other fruits and veggies but the above seem to be the ones they normally chose to eat.

This species is relativly hardy as long as not exposed to ongoing damp conditions.

Scarlet Chested keets are peaceful and can be kept in an aviary with other peaceful species such as Bourkes, Socities and other peaceful finches. Males of their own species may have a few territorial aggruments during the breeding season but typically nothing fatal. They are not known for talking.

These birds can be housed in a mixed species aviary with other peaceful birds or in breeding flights with one pair per flight. Be sure not to place them into cages to small for them as they are avid flyers and will greatly enjoy having the room to fly.

Males do not have a true song but do have quiet melodious calls. This is the perfect species for apartment bird lovers as they are beautiful and quiet.

Established pairs can become very prolific and may breed any time of the year given the right conditions. We use a 12 x 10in. nestbox for our pairs. When ready to breed the hen will lean forward on the perch and make small chirping noises. In most cases the male will be more than willing to accept her request. The hen typically lays 4-6 eggs though the average clutch to hatch seems to be 3-4 babies. After the third egg is laid she will incubate them for 18-20 days.

The male rarely accompanies the hen in the nestbox but will often make frequent visits in which he feeds the hen. The hen is normally a tight sitter and will be reluctant to move from the eggs. Young splendids usually leave the nest at 4 weeks of age. At 7-8 weeks of age the young are independent and can be moved from the parents.

All juveniles resemble hens but at about 3 months of age young males will begin to get red chest color.