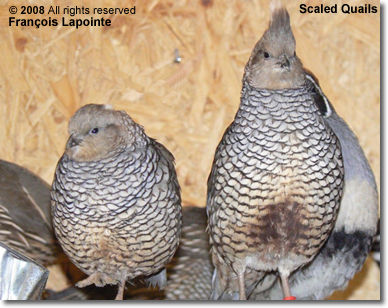 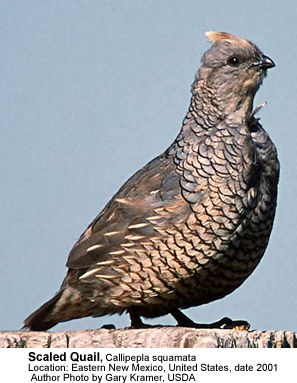 The Scaled Quail (Callipepla squamata), also commonly called Blue Quail or cottontop, is a species of the New World quail family. It is a bluish gray bird found in the arid regions of the Southwestern United States to Central Mexico. This species is an early offshoot of the genus Callipepla, diverging in the Pliocene (Zink and Blackwell, 1998).

This bird is named for the scaly appearance of its breast and back feathers. Along with its scaly markings, the bird is easily identified by its white crest that resembles a tuft of cotton.

The nest is typically a grass-lined hollow containing 9-16 speckled eggs. When disturbed, it prefers to run rather than fly.

Widespread and common throughout its range, the Scaled Quail is evaluated as Least Concern on the IUCN Red List of Threatened Species.

The Scaled Quail occupied a wider range during the drier conditions of the last ice age, inhabiting also areas northwest of its present range up to the Colorado River (Rea, 1973). It has formed several subspecies, 3 of which range into the USA: