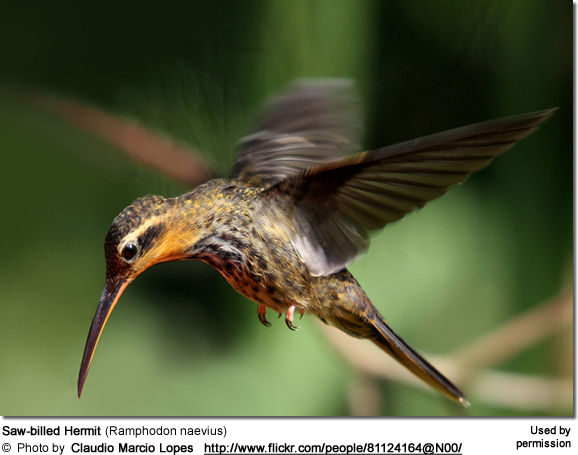 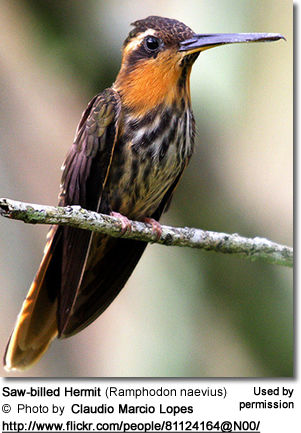 The Saw-billed Hermit (Ramphodon naevius) is a South American hummingbird that is endemic to southeastern Brazil.

The Saw-billed Hermit is relatively common in Atlantic coastal forest areas and second growth, in south-east Brazil (Espírito Santo and Minas Gerais to Rio Grande do Sul), up to elevations of up to 3,000 ft (~900 m). However, there have been sightings in the extreme north of Argentina.

This species is considered endangered due to urbanization, industrialization, agricultural expansion, colonization and road-building - all of which results in loss of suitable habitat. Subsequently, the Saw-billed Hermits are not considered near threatened by Birdlife International.

The Saw-billed Hermit is one of the longest and heaviest hummingbirds, with an average length of 14–16 cm (5.5 - 6.3 inches); and an approximate weight of 10 grams (0.4 oz). The lower bill is pale; the upper bill is dark. It has a straight bill, with a hooked tip. It is named for the tiny serrations on the bill ("saw-billed").

It ha a heavily streaked chest and distinctive buffy supercilium ("eye-brow") markings. The throat is orange with a dark stripe down the middle. The roundish tail has buffy-brown tips.

Gender ID: The female's bill is slightly shorter and she lacks the hooked tip of the male. The male is more strongly marked below.

The female Saw-billed Hermit is responsible for building the remarkable cone-shaped nest which hangs by a single strong cable of spiders' web from some overhead support, which could be a branch or the underside of the broad leaves of, for example, Heliconia plants, banana trees or ferns about 3 - 6 ft (1 - 2 m) above ground. However, these unusual nests have been found beneath bridges, in highway culverts and even hanging from roofs inside dark buildings. The nest is often near a stream or waterfall. It is constructed out of plant fibers woven together and green moss on the outside for camouflage in a protected location. She lines the nest with soft plant fibers, animal hair and feather down, and strengthens the structure with spider webbing and other sticky material, giving it an elastic quality to allow it to stretch to double its size as the chicks grow and need more room. 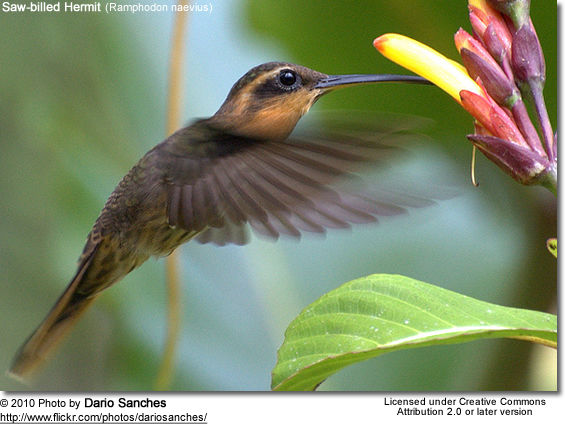 Hermits are "trap-line feeders"; as such, they visit plants along a long route (in this case of up to 0.6 miles or 1 km) - as opposed to most other hummingbird species which generally maintain feeding territories in areas that contain their favorite plants (those that contain flowers with high energy nectar), and they will aggressively protect those areas.

These hummingbirds use their long, extendible, straw-like tongues to retrieve the nectar while hovering with their tails cocked upward as they are licking at the nectar up to 13 times per second. Sometimes they may be seen hanging on the flower while feeding. 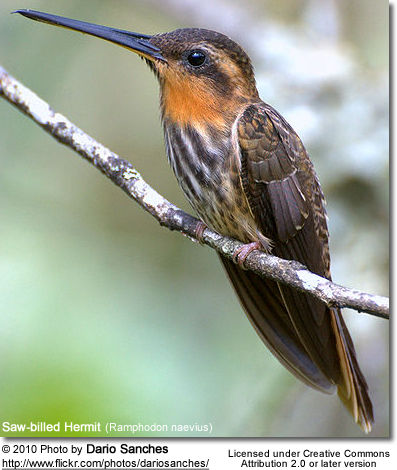