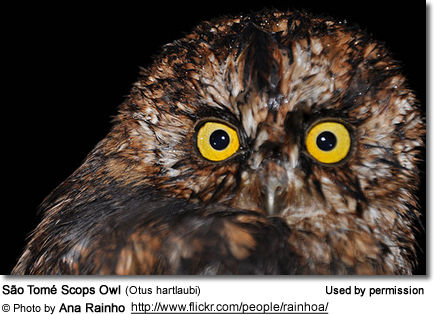 The SÃ£o TomÃ© Scops Owls (Otus hartlaubi) are endemic to the small island of Sao TomÃ© and possibly the adjacent island of Principe - both islands form an island nation in the Gulf of Guinea, off the west coast of Africa.

This species is classified as Vulnerable. It is expected that only several hundreds of them have survived, based on their very limited range and ongoing destruction of suitable forest habitat.

Like most owls, the Sao Tome Scops Owls are mostly active at night (nocturnal) and spends most their days roosting in tree cavities amongst dense foliage.

These relatively small owls measure about 6.3 - 7.5 inches (16 - 19 cm) in length (including the tail) and weigh about 2.9 oz (80 grams). They have sharp, hooked bills, light rufous-brown facial discs, white chins and eyebrows, small ear tufts and short, rounded wings. The crown and upper plumage is rufous-brown with rufous wave-like patterns and black shaft streaks. There is buff and white mottling on the wing feathers and narrow buff bars on the tail.

The plumage below is patterned white, brown and rufous with bold black streaking. Their eyes are yellow

Immature birds can be identified by the paler plumage.

Most breeding activity has been observed between August and October - before the start of the rainy season.

They nest in tree cavity or possibly on the ground.

The Sao Tome Scops Owls mostly feed on insects, such as grasshoppers, beetles and moths; and to a lesser extent on small lizards.

They generally forage in dense vegetation of the lower parts of the forest, capturing prey by dropping down from a perch, gleaning them from foliage, or catching them mid-air. Rarely, they will descend to the ground.

Their calls are often heard at dusk or dawn, and occasionally during the day; and their vocalizations are described as high-pitched €˜hu-hu-hu€™ or low, harsh €˜kowe€™.