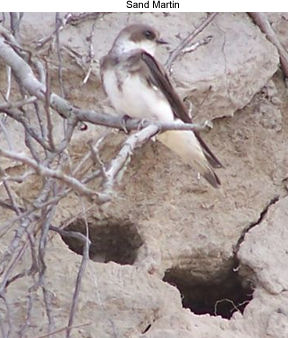 The Sand Martin (Riparia riparia) is a migratory passerine bird in the swallow family.

It has a wide range in summer, embracing practically the whole of Europe and the Mediterranean countries, part of northern Asia and also North America, where it is called Bank Swallow.

It winters in eastern and southern Africa, southern Asia and South America.

The Sand Martin appears towards the end of March, just in advance of the Barn Swallow, as the first of its family, flitting over the larger sheets of water in search of early flies.

Its brown back, small size and quicker, jerkier flight separate it at once from Swallows and House Martins. Later parties accompany Swallows, but for a time, varying according to weather, the birds remain at these large waters and does not visit its nesting haunts.

The 12 cm long Sand Martin is brown above, white below with a narrow brown band on the breast; the bill is black, the legs brown. The young have rufous tips to the coverts and margins to the secondaries (shorter, upper "arm" feathers).

The twittering song is continuous when the birds are on the wing, and becomes a conversational undertone after they have settled in the roost. The harsh alarm is heard when a passing Kestrel, Carrion Crow or other suspected enemy requires combined action to drive it away.

The food consists of small insects, mostly gnats and other flies whose early stages are aquatic.

The Sand Martin is sociable in its nesting habits; from a dozen to many hundred pairs will nest close together, according to available space. The nests are at the end of tunnels of from a few inches to three or four feet in length, bored in sand or gravel.

The actual nest is a litter of straw and feathers in a chamber at the end of the burrow; it soon becomes a hotbed of parasites. Four or five white eggs are laid about the middle of May, and a second brood is usual.

The Sand Martin departs early, at any rate from its more northerly haunts. In August, the gatherings at the nightly roost increase enormously, though the advent and departure of passage birds causes great irregularity in numbers.