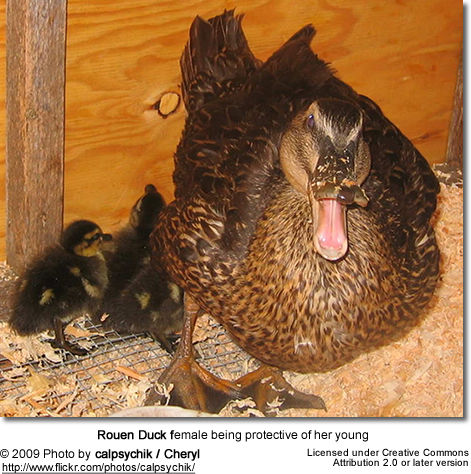 The Rouen duck is a heavyweight breed of domesticated duck raised primarily for decoration or as general purpose ducks, since they are not prolific egg layers. The breed originated in France sometime before the 19th century.

The Rouen resembles a Mallard: they have green heads, white collars, a deep claret breast and blue speculum feathers (the speculum is the patch formed by colorful or iridescent secondary feathers on the wings), but they are brighter in color and larger in size than Mallards. 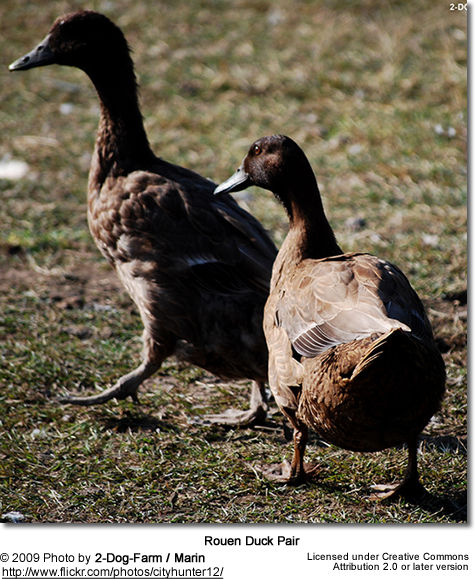 The breed was first raised in France, but it was not until it reached England in the 1800s that it was refined into the breed recognized as the Rouen today. The French version resembled a larger than an average Mallard, but by selective breeding the British managed to double the size of the bird, improve its coloration, and add bulk, giving it a more "boat-like" aspect. It was used chiefly as a roasting bird; though it produced 35 to 125 eggs a year, there were other breeds which were more reliable egg-layers with higher production.

The origin of the name is not known. When they arrived in England, they were variously called Rhône, after the region in southwest-central France; Rohan, after the cardinal of that name; Roan, for the mixture of colors; and Rouen after the northern French town, with Rouen eventually being adopted in both England and France. In France they are called Rouen Foncé (dark) as opposed to Rouen Clair, which are lighter in color.

In 1850 the first Rouens were introduced to the USA by D. W. Lincoln of Worcester, Massachusetts, where they were used as general farm ducks until becoming popular as show birds. They were included in the American Poultry Association's Standard of Perfection in 1874 and since then have won many titles, often having the most entries in the heavyweight class and doing well in competition with other breeds.