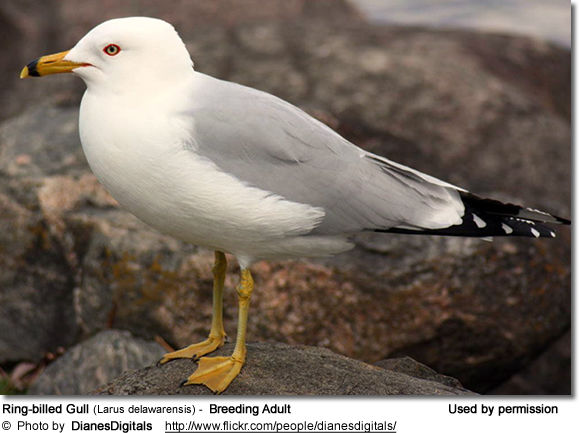 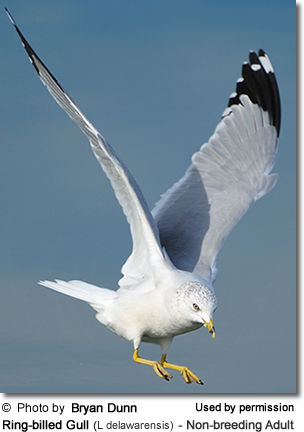 The Ring-billed Gull (Larus delawarensis) is a medium-sized gull with a large natural range that encompasses both North and Middle America. It is also a regular visitor to Western Europe.

Even though they are often called "sea gulls" - they can also be found far from the sea.

Ring-billed Gulls are migratory birds that are native to Alaska, Canada, Continental USA and Hawaii. They are vagrants to the Caribbean Territories and Western Europe.

They breed across northern Great Plains, and southern Prairie Provinces of Canada; also in Great Lakes region, Canadian Maritimes, and northern New England, and the northwestern half of the United States (locally south to California). In the United States, they occur along both coasts; as well as the Central American and Caribbean coasts and interior areas near rivers and lakes.

In the northernmost range, they are wandering into Alaska and Yukon (northwestern Canada).

For the winter, the New England population moves south to Cuba; the Great Lakes Population down to the Gulf Coast and the British Columbia population winters in southern Mexico. Their numbers in Central America, the Greater Antilles, and the Lesser Antilles have been increasing in recent years. Some winter in Bermuda and Hawaii. They were first recorded as vagrants in Florida in 1930, but are now common winter visitors.

Some Ring-billed Gulls are regularly wintering in Western Europe, Ireland and Great Britain. In some areas of Britain, the numbers of this species have increased dramatically and many of them appear to be virtual residents in some coastal areas. 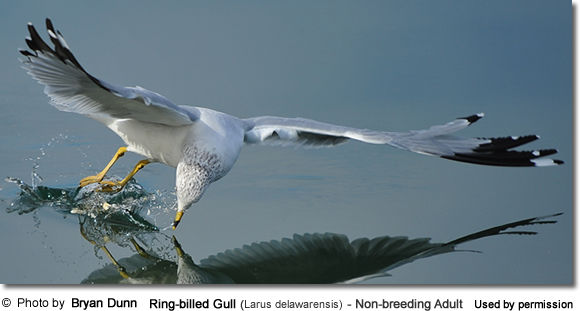 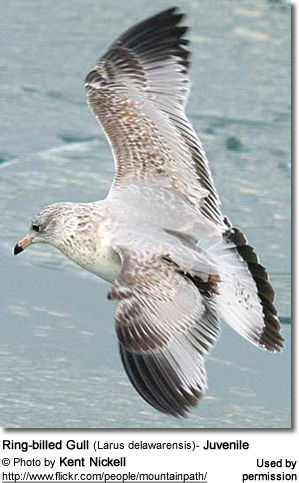 Ring-billed Gulls are found along beaches, inland waterways, lakes and wet meadows. They generally like open areas with sandy or rocky ground with only sparse vegetation and pebble beaches.

They adapted well to urban and suburban landscapes and are also found on large lawns and parking lots. They can also be seen scavenging at landfills.

Ring-billed Gulls have been observed in play, dropping objects in flight, and then dropping down to catch them. 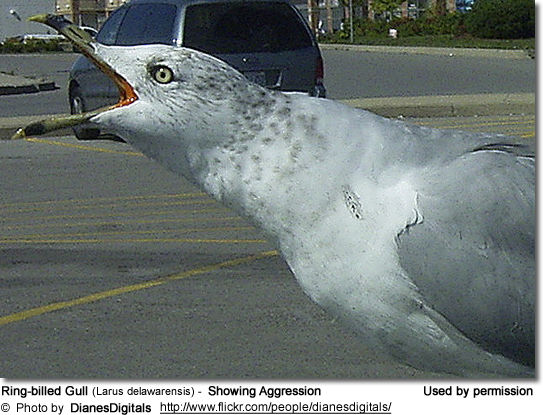 The Ring-billed Gull's most distinctive feature is its relatively short, bright yellow bill with a black ring near the tip. The eyes are yellow. The legs and feet are either yellow or greenish in colo9r. Gulls have differing winter and summer (breeding) plumages.

The head, neck and chest and abdomen are white. Outside the breeding season, the adults have grey streaks on their white heads. The back, shoulders and upper wings of ring-billed gulls are a light, silvery grey. The wings are tipped in black with white spots.

The plumage of the juvenile evolves for about three years, until it attains the adult plumage, its appearance changing with each fall molt.

Their plumage is paler than that of the otherwise similar young Herring Gulls, with blackish wing tips and tail. Their bill is dark-tipped.

Juveniles attain adult plumage when they are about three years old; 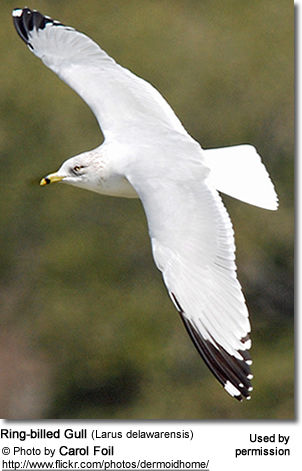 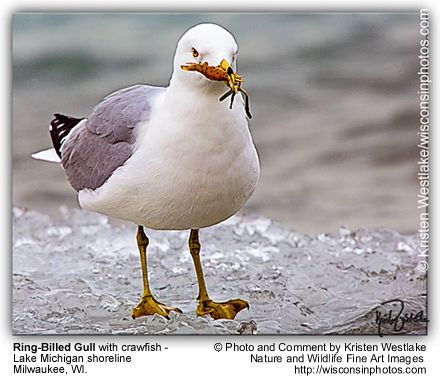 Ring-billed Gulls reach reproductive maturity when they are two or three years old. They breed only once a year. Most breeding activity is observed between May and August.

Upon arrival in the nesting colonies, Ring-billed Gulls establish territories within these colonies. Pairing can occur before or shortly after arrival on the breeding grounds. For the most part, they are monogamous (only have one mate); however, occasionally a male is mated with two females - particularly so in expanding breeding colonies. These breeding colonies often include other gull species and terns.

They usually breed in colonies near lakes, rivers, along the coast, or on islands. A nesting colony may consist of as 1,000 Ring-billed Gulls. On an island in Lake Ontario, around 85,000 nesting pairs can be found.

The nest is situated on the ground near water - but in some cases, they nested in low trees.

Pairs are typically reusing the same nesting site from year to year. They return to their nesting sites well before the actual nesting begins to establish their territories.

Both the male and female build the nest together out of twigs, sticks, grasses, leaves, lichens, mosses and debris.

A clutch may consist of 2 - 4 eggs (mostly 3). The eggs range in color from whitish, brownish or olive with darker brown markings; and measure ~ 2.5 inches (6.4 cm) in length and 1.8 inches (4.6 cm) in width. Both the male and the female incubate the eggs for 25 - 31 days; and also raise the chicks together - brooding them to keep the chicks warm and feeding them regurgitated food. The chicks are able to leave the 3 to 4 days after hatching. They fledge (take their first flight) about 4 to 5 weeks later. 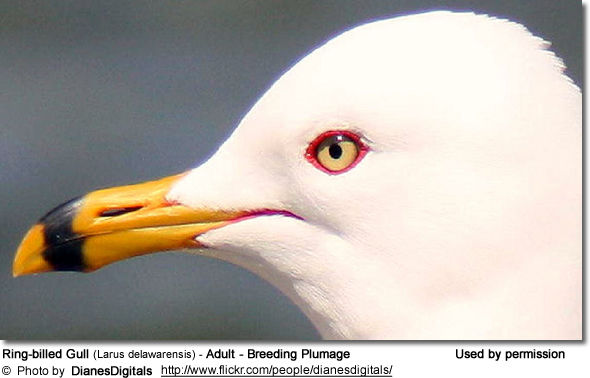 Ring-billed Gulls are opportunistic feeders and will accept just about anything.

They regularly feed on:

These scavengers are not picky about what they eat and regularly take advantage of landfills, garbage dumps, and ships that toss garbage overboard. They will also hang around restaurants to pick up discarded food items. Because of this behavior, they are often referred to as "fast food gull." "trash gulls," and "landfill larids" (for the genus Larus),

During the breeding season, when communicating with their young or during the mating ritual, they make raucous mewing cries. 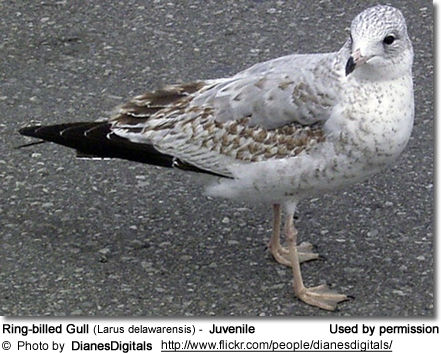 The Ring-billed Gull is expected to live 3 to 10 years in the wild, with the maximum known lifespan of 23 years.

In the late 19th century, the Ring-billed Gulls were heavily hunted for their feathers. They have recovered since, probably because they benefitted from human activities, such as landfills and fishing. They have a very large territory, and may very well be the most common gull species in North America. Even though they are not considered threatened (Least Concern), they are protected under the U.S. Migratory Bird Treaty Act as migratory birds.

They are preyed upon by the following: 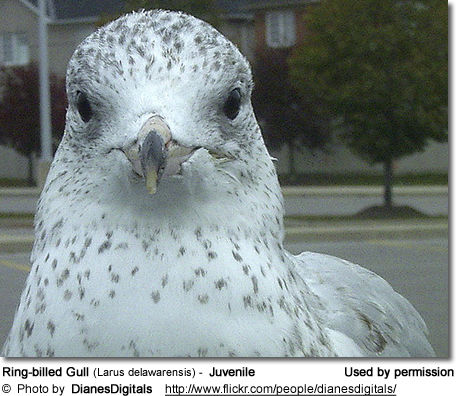