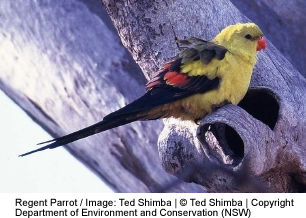 The Regents Parrot (Polytelis anthropeplus) originates from Southwestern and southeastern Australia is not commonly kept as a companion bird.

Hand reared male birds make the best pets and have a friendly and pleasing nature.

The striking golden colour of the male Regents Parrot makes for a very handsome pet and brings much joy to the owner. The Regents Parrot is easily tamed and very sociable. Like the Superb Parrot, the Regents possesses the ability to produce delightful whistling noises and to a small degree, imitate the human voice.

Talking Ability (compared to other parrots)

An occasional fresh willow or fruit tree branch to "spruce up" their quarters seems to please the birds. The Regent Parrot is naturally hardy, so being careful to protect them from drafts and the like is unnecessary. That said, however, they should be protected from excessive cold, as such is uncommon in their natural habitat.

They are susceptible to eye infections and feet problems (with fright and stress as causes). As they spend a lot of time on the ground they are more likely to pick up parasites. Therefore, it is recommended to worm regularly.

The Regent Parrot grows to approximately 14½-16½" (37-42 cm) in length, and exhibits sexual dimorphism (meaning, males and females can be visually sexed).

The male bird is generally yellow, with several shades on the head; its back is generally a collection of colorful shades of green; its beak generally red.

The female is generally more green, overall, especially in the head and body. The tail is green, although the underparts are black. 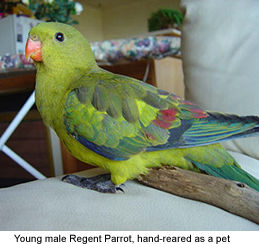 In their natural habitat, the Regents Parrot typically nests in large, mature healthy trees with many spouts (though dead trees are used) close to a watercourse.

The female broods 3-7 eggs for approximately 20 to 23 days. The first clutch is occasionally infertile as female is often in condition before the male.

During the incubation period, the hen seldom departs from the nest, if at all, and is fed by the male. When the young have hatched, they are cared for by both the male and female. During this period, they can be fed several times their normal portion of feed, which they readily convey to their young. The young begin to fly at about 35 days and are independent at 50 days. Sexual maturity is reached at about 2 years of age. The Regents Parrot can breed twice a year. It's, however, best to remove the young from the first breeding on the onset of a new breeding cycle.

The Regents Parrot is an excellent aviary bird and will live comfortably with other non-aggressive species. Aviaries should be a minimum of three to four metres long and one to two metres wide. When provided with adequate conditions and a suitable diet, there is no reason why most Regents Parrots will not breed.

Captive Feeding: Regent Parrots thrive on chopped mixtures for large parrots. Various fruits and vegetables (particularly carrots, oranges and apples), as well as rose-hips and greenfood (chickweed, dandelion, spinach etc.) should be part of their diet. A high quality seed mix consisting of sunflower, wheat, oats, canary seed, various millets and weed seeds should be their base diet. They also like eggfood, sprouting seeds and a small assortment of insects. Insect softfood is particularly important during the breeding season and when raising the young. As with all birds, they need a ready supply of coarse grit to aid in digestion.

Natural Diet: Their principal foraging habitat are mallee woodlands, though foraging also occurs in riverine forests and woodlands. They may utilize cereal crops and will feed on spilt grain.

Please refer to the following websites for valuable information: 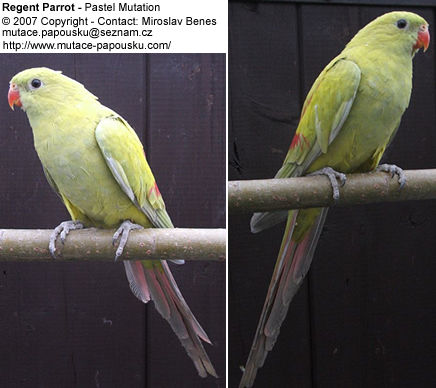 Taxonomy and Other Data:

Description: They average 15.5 inches (40 cm) in length. The general plumage is yellow; the back is olive-green. They have a broad red band across the inner wing-coverts. The outer wing-coverts and tail are bluish-black. The bill is reddish and the eye-ring is grey. The irises are orange-brown and the feet grey.

Females have an olive-green head and breast. Her upper wing-coverts are olive-yellow with little red. Her tail is dark bluish-green. The underside has pink tips.

Young birds look like females. Young males attain adult plumage when they are 13 to 18 months old.

Distribution: Native to the interior of southeast Australia.

Distribution: They are native to Southwest Australia

Description: At 15 inches (38 cm) they are slightly smaller than the nominate form, Regent's Parrot - anthopeplus - described and featured above. However, the head and the breast are a deeper olive-green. Females and immatures look like female Regent's Parrots described above.