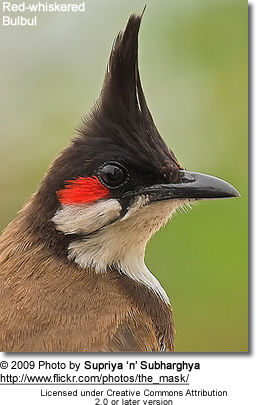 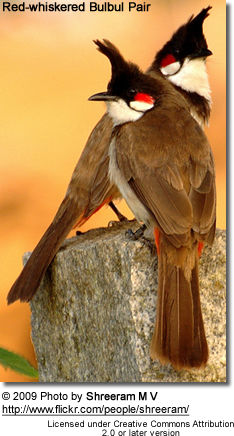 The Red-whiskered Bulbuls (Pycnonotus jocosus) are non-migratory bulbuls found in tropical Asia - from Pakistan and India through to southeastern Asia and China. They typically roost in loose groups.

In parts of India, these birds were popular cage birds, because of their confiding disposition they were easily captured.

They have also been introduced in many tropical areas of the world, including southeastern USA (Florida).

The expected life span is about 11 years. 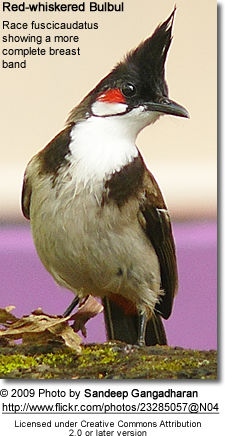 The Red-whiskered Bulbul measure about 20 cm (7 in.) in length, including the tail.

The plumage above is mostly brown. Below they are whitish with buff-colored flanks and a broken dark chest band (that may be nearly complete in some subspecies).

They have a tall pointed black crest, red face patch and thin black moustachial line. The tail is long and brown with white tips (some subspecies lack the white tips). The vent area is red.

This species is more often heard than seen, especially in the mornings when they call from the tops of trees.

Their loud calls are described as a sharp kink-a-joo, and their songs as scolding chatter. 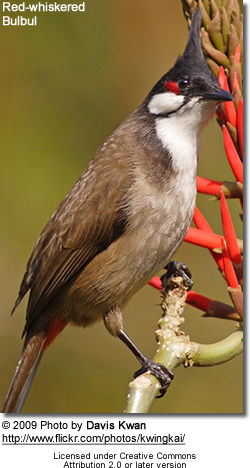 The Red-whiskered Bulbuls are native to tropical Asia, where they inhabit lightly wooded areas, more open country with bushes and shrubs, and farmland.

Introduced feral populations have established themselves in the USA (Los Angeles, Florida, Hawaii); in the Mauritius, Assumption Island and Mascarene Islands; and Australia, where the Red-whiskered Bulbul was introduced by the Zoological and Acclimatization Society in 1880 to Sydney, and became well established across the suburbs by 1920. They have continued to spread to around 100 km away. They are now also found in suburban Melbourne and Adelaide.

Their main diet consists of various fruits (including those of Thevetia peruviana that are toxic to mammals), as well as nectar and insects.

Numerous plants have benefitted from these birds by having their seeds dispersed, thus producing plants in areas that are far away from the mother plants. For example on the island of Réunion, where the Red-whiskered Bulbuls were introduced, they aided the spread of alien plant species, such as Rubus alceifolius. In Florida, they feed on fruits and berries of exotic plants including loquat (Eriobotrya japonica), Lantana spp., Brazilian pepper (Schinus terebinthifolius) and figs (Ficus).

Most of the breeding activities occur between December to May in southern India and March to October in northern India. During this time, they defend territories of about 0.3 ha (0.75 acres).

Their platform nests are typically placed in bushes. The average clutch consists of 2 - 3 eggs that are pale mauve ground in color with speckles that turn blotchy towards the broad end. Each egg measures about 21 x 16 mm. The eggs are incubated for about 12 days to hatching.

The hatchlings only have feathers growing from specific tracts of skin. Both parents raise the young, feeding them and protecting them. The parents may feign injury to distract potential predators away from the nest.

They usually only breed once a year. 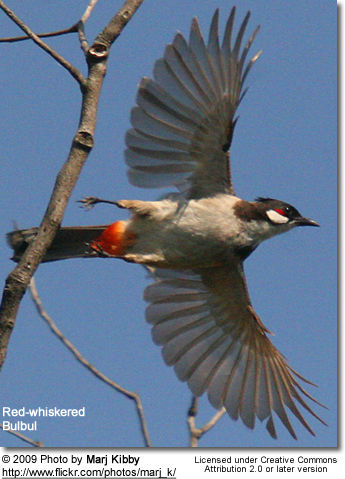 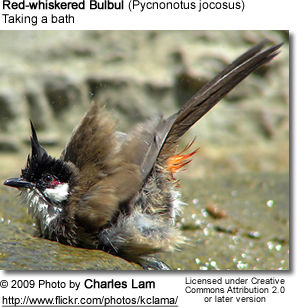 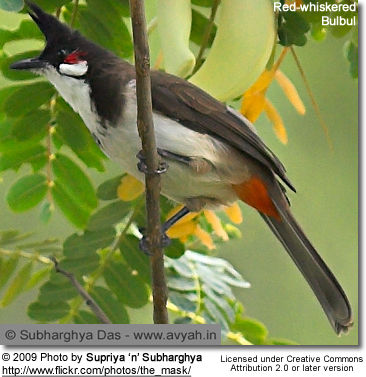 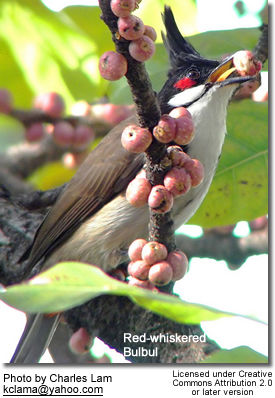