The Red-vented Bulbul (Pycnonotus cafer) is a member of the bulbul family of passerine birds. It is resident breeder in tropical southern Asia from India and Sri Lanka east to Burma and southwestern China. It has been introduced and has established itself in the wild in many Pacific islands including Fiji, Samoa, Tonga, and Hawaii. It has also established itself in parts of Dubai, the United Arab Emirates and New Zealand.

The Red-vented Bulbul was originally described by Linnaeus in 1766. Several populations of this widespread species are named subspecies (or races). The race in the western part is intermedius and is found in Kashmir and Kohat down to the Salt Range and along the Himalayas to Kumaon. The race bengalensis is found in the Himalayas from Nepal east to Assam. South of these two forms are pallidus to the west south to Ahmednagar and saturatus along the east, south to the Godavari. Southern India has the nominate race. The type locality of Pondicherry was designated by Erwin Stresemann. There are no distinct boundaries to these racial forms and more recent workers do not recognize pallidus and saturatus but note the desert form humayuni, northeastern stanfordii and the Sri Lankan race haemorrhous. Race melanchimus is found in Southern Burma.

Race chrysorrhoides is found in China. Two formerly designated races nigropileus in Southern Burma and burmanicus of Northern Burma are considered as hybrids.

The Red-vented Bulbul is easily identified by its short crest giving the head a squarish appearance. The body is dark brown with a scaly pattern while the head is darker or black. The rump is white while the vent is red. The black tail is tipped in white. The Himalayan races have a more prominent crest and are more streaked on the underside. The Race intermedius of the Western Himalayas has a black hood extending to the mid-breast. Race bengalensis of Central and Eastern Himalayas and the Gangetic plain has dark hood without scales with dark streaks on the lower belly. Race stanfordi of the South Assam hills is similar to intermedius. The desert race humayuni from a paler brown mantle. The nominate race cafer is found in Peninsular India. Northeast Indian race wetmorei is between cafer, humayuni and bengalensis. about 20cm in length, with a long tail. Sri Lankan race haemorrhous (=haemorrhousus has a dark mantle with narrow pale edges. Race humayuni is known to hybridize with the Himalayan Bulbul (Pycnonotus leucogenys) and these hybrids have been named by the race magrathi which have pale rumps and yellow-orange or pink vents. In Eastern Myanmar there is hybridization with the Sooty-headed Bulbul (Pycnonotus aurigaster).

Males and females look alike in plumage, but young birds are duller than adults.

Melanistic as well as albinistic individuals have been noted. 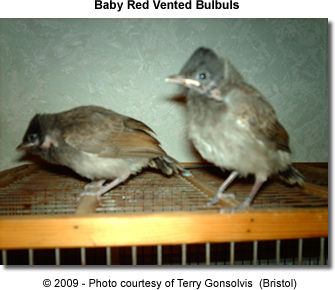 This is a bird of dry scrub, open forest, plains and cultivated lands. In its native range it is rarely found in mature forests. A study based on 54 localities in India concluded that vegetation is the single most important factor that determines the distribution of the species.

It has been introduced into Hawaii, Fiji and New Zealand. The were introduced to Samoa in 1943 and became common on Upolu by 1957. Red-vented Bulbuls were introduced to Fiji around 1903 by indentured labourers from India. They established on the Tongan islands of Tongatapu and Niuafo'ou. They were seen in Melbourne around 1917 but not seen after 1942. They established in Auckland in the 1950s but were exterminated. They prefer the dry lowland regions in these introduced regions. They are considered as pests because of their habit of damaging fruit crops. They can also disperse the seeds of invasive plants like Lantana camara and Miconia calvescens.

The Red-vented Bulbul was also introduced to Melbourne in Australia but failed to establish there. 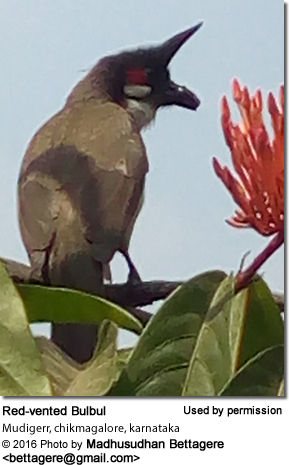 It feeds mainly on fruits, petals of flowers, nectar, insects and occasionally geckos. They have also been seen feeding on the leaves of Medicago sativa.

It builds its nest in a bush at a height of around 2-3 m (7-10 ft; two or three eggs is a typical clutch. Nests are occasionally built inside houses[30] or in a hole in a mud bank.[31] They breed from June to September. The eggs are pale-pinkish with spots of darker red more dense at the broad end.[32] They are capable of having multiple clutches in a year. Nests are small flat cups made of small twigs but sometimes making use of metal wires.[33] The Pied Crested Cuckoo is a brood parasite of this species. Fires, heavy rains and predators are the main causes of fledgeling mortality in scrub habitats in southern India.[35]

Their vocalizations are usually stereotyped and they call throughout the year. However a number of distinct call types have been identified including roosting, begging, greeting, flight and two kinds of alarm calls

They are important dispersers of seed of plants such as Carissa spinarum.

The Red-vented Bulbul is among the few animals that have been demonstrated to be incapable of synthesizing vitamin C. This feature with certain fruit bats and primates (including humans) as well as the guinea pig.

These bulbuls are hosts of Isospora (Coccidia)[40] while some bird lice such as Menacanthus guldum (Ansari 1951 Proc. Natl. Inst. Sci. India 17:40) have been described as ectoparasites.[41]

In 19th Century India these birds were frequently kept as cage pets and for fighting especially in the Carnatic region. The would be held on the finger with a thread attached and when they fought they would seize the red feathers of the opponents.

Indians frequently tame it and carry it about the bazaars, tied with a string to the finger or to a little crutched perch, which is often made of precious metals or jade ; while there are few Europeans who do not recollect Eha's immortal phrase anent the red patch in the seat of its trousers.