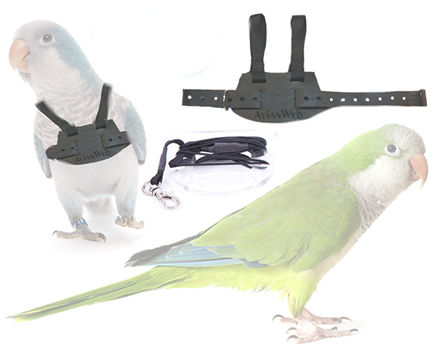 Quaker Parrots are easy to breed and prolific, and therefore make an .excellent choice for the novice breeders. Aggression amongst quaker parrots may occur. Some breeders report that their experience is that the fewer quakers are in one the flight the more likely one or two are going to be picked on. One experienced breeder states that when he had only two pairs in a flight, only the dominant pair reared young.

Housing 3 or 4 pairs together seems to work well for most. It is recommended that you have an equal number of males and females. Squabbles over favorite nest sites and nesting materials (sticks) is likely to occur.

Many beautiful mutations have occurred in aviculture. Please refer to this page for photos.

Most breeding successes have been reached in an aviary environment -- as they need lots of space and plenty of plenty of shrubbery. Although some breeders have been successful using breeding cages and ordinary cockatiel nest boxes. They do prefer to build their own elaborate nests using twigs, vines, grasses, shredded paper, grasses, or just about any safe building material. It is the female who usually constructs the nest. They usually produce two clutches of 4 to 8 babies a year. The young will leave the nest at about six weeks.

However, breeders usually pull the babies and handraise them - to fill the demand for handraised, tame companion birds.

One peculiarity that breeders have noted is that if they pulled some chicks and left some in the nest, all pairs stopped feeding the remaining chicks and even those on eggs would stop incubating them. So all the chicks had to be pulled at the same time and a time when no eggs were being incubated. However, such problems may be less likely to occur in domestically reared birds - as opposed to imported birds that were taken out of their natural habitat.

Fortunately, the chicks are easy to handfeed. Handfed babies usually wean at eight to ten weeks of age.

The visual differences between the sexes is very slight, so having the birds sexed by surgical sexing or DNA is almost mandatory. They are sexually mature at about a year or a year and a half and will usually bond closely with the mate provided them.

It is not recommended to keep them with other species of birds, as they are likely to get very aggressive with others. 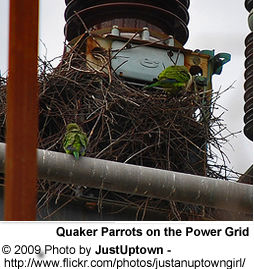 Feral Quakers build elaborate communal nesting "condos" using sticks and twigs they collected from their environment. These twigs are then intricately woven together, and future generations simply "build on" -- gradually enlarging the nest to provide private nesting chambers for each pair.

Their favorite nesting sites includes the canopy of trees, or in urban areas they use utility poles, roof tops, flood lights and even air conditioning systems to nest on or under. They will basically consider anything that provides sufficient shelter and platform as a potential for their nests. These nests can reach 20 feet (6 m) across and hold dozens of individual nesting chambers. If their nests are destroyed either by nature or humans, they will simply rebuild it. The sheer size of these nests poses problems for humans when built atop power lines as these nests can weigh them down and pose a fire hazard.