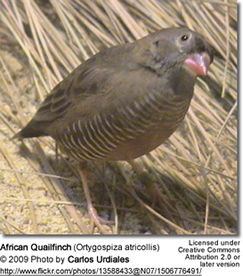 Quailfinches are usually seen in pairs or small flocks; and they frequent open areas with patchy grass growth - often close to water - including sandy grassland, marshes, farms and croplands, as well as recently mowed areas.

Quailfinches are true desert birds that are mostly found on the ground foraging for food. But they also spend a good time perching on stones and dead wood, for example. When this shy species is approached, their initial response is to crouch and "freeze." When flushed, these finches raise straight into the air then drop straight back down to the ground - similar behavior has been observed in Quails. 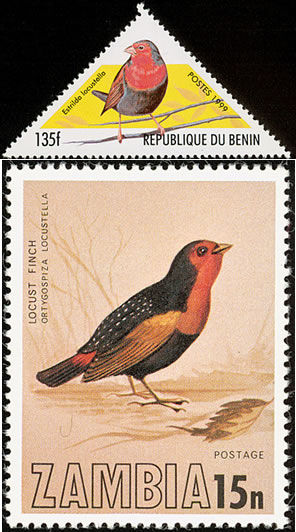 They are sociable seed-eaters with plum-brown or grey bodies, short tails and short, thick bills.

Their feet are a dusky fleshy color with long, lark-like hind claws which are indicative of this species' terrestrial nature.

These finches walk, rather than hop (which differentiates them from other finch species).

Quailfinches are ground feeders and their staple diet consists of small grass seeds. Particularly during the breeding season, they seek out live food, such as insects, spiders and worms.

Quailfinches are monogamous unless their mates die, in which case they will seek out new mates.

These finches build their dome-shaped nest made of grass stems and blades on the ground. The average clutch consists of 3 to 6 white eggs. Both parents participate in the incubation duties, though the female does most. The incubation period is about 14 days.

The young leave the nest about 19 to 20 days after hatching and are independent when they are about 30 days old.

Its call sounds like a metallic "trillink" or "chwillink." Its song consists of a series of "click, clack, cluck" notes delivered rapidly and in succession.

This finch is rare in aviculture, some of the reasons might be that they lack the colorful, flashy plumage of several of their African cousins, or the fact that they are shy and flighty in disposition. Their remote desert habitat also makes them less accessible. However, once they are acclimatized they make charming and hardy aviary occupants.

As ground birds, it is important to provide them with a flat, suitable ground surface - optimally creating some sort of desert habitat for them. Some breeders keep these finches in large aquariums with sterilized sand on the ground and rough stones placed randomly across the floor (giving it a "desert ground appearance). Cleaning is simple, simply sifting the sand when needed. It is best to remove the birds when cleaning the aviary or enclosure (especially in small enclosures where they can't get away from you).

These birds love to sunbathe, so a heat lamp (if no natural sunrays are accessible) is recommended. It should be situated at one end of the enclosure, to allow one "shady" side on the other side for these finches to get to when they get hot.

When the breeding season begins, provide long strands of Bermuda grass with which these finches will build their nest, as well as coco fibers and sterilized feathers as suitable nest liners. You can sterilize feathers by soaking them overnight in a mild bleach solution and allowing them dry before offering them to your birds.

Their diet should consist of a good-quality dry finch mix with some extra canary grass seed added to it. Some live food, such as meal and wax worms and fresh egg food , is also recommended. During the breeding season in particular, it is important to increase their access to live foods. It's best to ration mealworms to one or two per bird per day outside the breeding season. Sprouted or germinated seeds are also cherished and offer a highly superior nutrition to these finches.