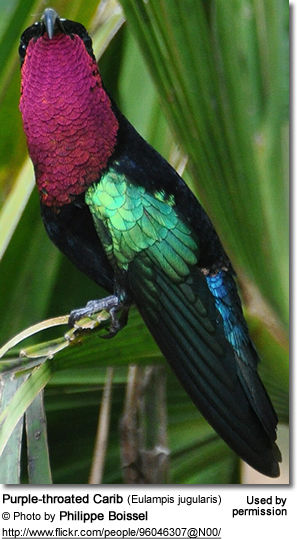 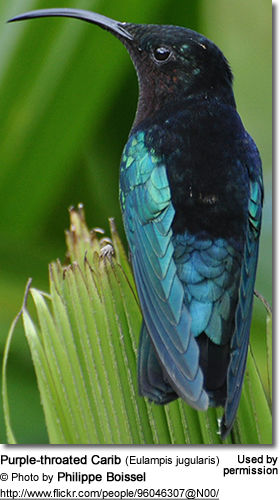 This striking hummingbird is found on most islands of the Lesser Antilles in the eastern Caribbean (off the coast of Venezuela); where it is resident (non-migratory). This species is not found anywhere outside the Lesser Antilles.

It is a vagrant on Barbados, Barbuda, Grenada and the U.S. Virgin Islands. 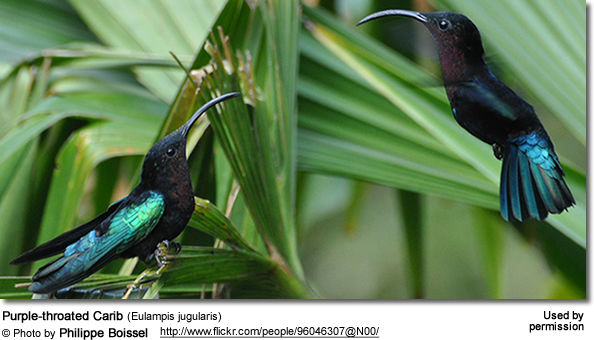 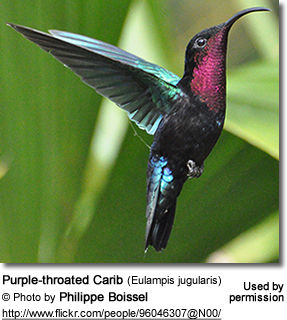 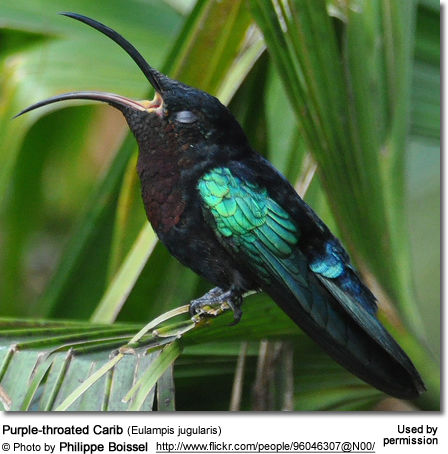 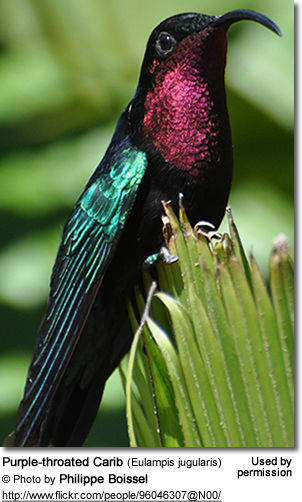 Their calls are described as a sharp chewp - repeated rapidly when agitated.

Nesting can take place between January through September. However, most will breed from February through May.

Scientists John Kress and Ethan Temele noted some unique behavior in the male Purple-throated Caribs. They found that these hummingbirds maintained and defended feeding territories that were two to five times greater than their daily needs. Additionally, they would defend not only the flowers they themselves prefer, but also those sought out by the females. (Since females have longer bills than the males, they are generally feeding on different types of flowers. Please refer to "Diet / Feeding" below.)

The primary motivation appears to be to attract females to mate with. The scientists found that the female's choice of a male depended on the supply of nectar in their territory - and that depended on his ability to prevent nectar losses to nectar-feeding intruders (including other male Purple-throated Caribs.

Contrary to other hummingbirds, where the flashy plumage and elaborate courtship displays attract the females, with this species it is the quality of his feeding territory that is important to the females when choosing whom to mate with.

The males do not participate in choosing the nest location, building the nest or raising the chicks.

The female Purple-throated Carib is responsible for building the open cup-shaped nest out of plant fibers woven together and green moss on the outside for camouflage in a protected location in a shrub, bush or tree - typically in the fork of a small branch between 9 - 60 ft (3 - 18 m) above ground. She lines the nest with soft plant fibers, animal hair and feather down, and strengthens the structure with spider webbing and other sticky material, giving it an elastic quality to allow it to stretch to double its size as the chicks grow and need more room.

The average clutch consists of two white eggs, which she incubates alone for about 17 to 19 days, while the male defends his territory and the flowers he feeds on. The dark-skinned young are born completely helpless and blind, two rows of down on the back. The female alone defends the area around the nest aggressively, and feeds the chicks with regurgitated food (mostly insects since nectar is an insufficient source of protein for the growing chicks). The chicks leave the nest when they are about 17 to 20 days old. The young will remain with the female for another 2 to 3 weeks after fledging. 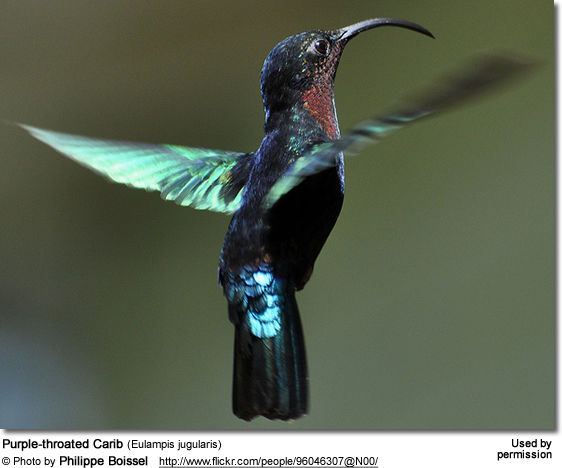 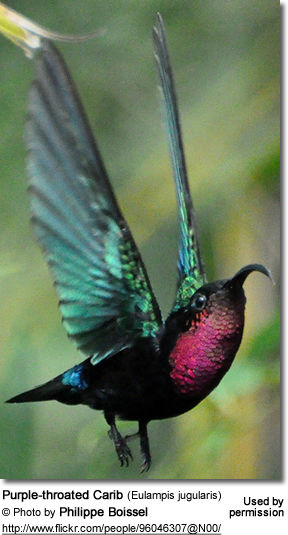 The Purple-throated Caribs primarily feed on nectar taken from a variety of brightly colored, scented small flowers of trees, herbs, shrubs and epiphytes - their favorites being the flowers of the Heliconia plant and banana tree. They favor flowers with the highest sugar content (often red-colored and tubular-shaped) and seek out, and aggressively protect, those areas containing flowers with high energy nectar. They use their long, extendible, straw-like tongues to retrieve the nectar while hovering with their tails cocked upward as they are licking at the nectar up to 13 times per second. Sometimes they may be seen hanging on the flower while feeding.

There are some distinct feeding / foraging differences between the genders: 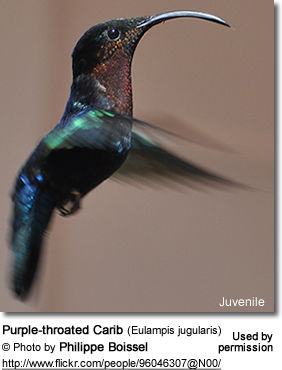 They also take some small spiders and insects - important sources of protein particularly needed during the breeding season to ensure the proper development of their young. To a lesser extent, insects are caught in flight (hawking); snatched off leaves or branches, or are taken from spider webs. 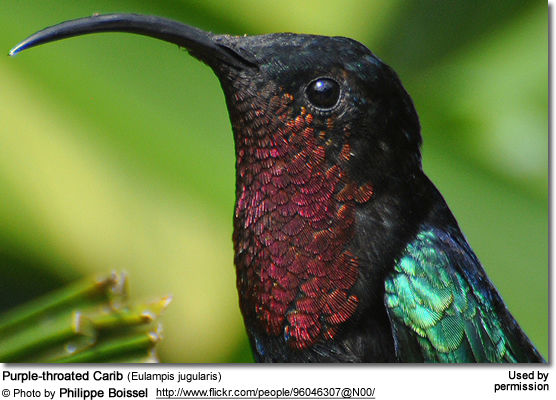