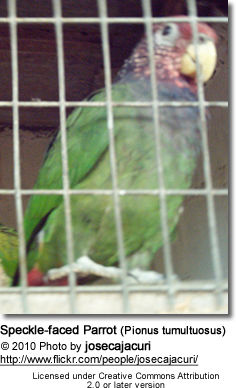 This parrot is native to La Paz and Cochabamba in northern Bolivia, northeast to eastern Cajamarca and southwest Amazonas, northwest Peru. The populations are fragmented in their range and groups of them can be found in South Colombia, Northwest Venezuela and Ecuador, as well as Northwest and East Peru and Cochabamba.

The prefer forest areas in temperate zones and adjoining cultivated areas with trees at altitudes ranging between 6,700 ft (2,000 m) and 9,300 ft (2,800 m). These parrots can occasionally be seen foraging in cultivated areas and banana plantations.

Seasonal migration patterns have been observed.

Their numbers have been declining in some areas due to deforestation and loss of habitat, and they are now generally rare.

The plumage is mostly green. The abdomen and sides of its body are yellowish-green. The forehead, lores (the regions between the eyes and bill on the side of a bird's head) and sides of the head are wine-red. All feathers are whitish at the base. The crown and back of the head are dark red. The nape, side of the neck, ear-coverts and the breast are purple-red turning brownish grey-blue on the breast. The under tail-coverts are red with yellowish-green edging to the tips. The primary wing feathers and flight-feathers are green. The under wing-coverts and underside of the flight-feathers are dull green. The middle tail-feathers are green. The outer tail-feathers have dull violet-blue tips and a red base. The bill is olive-yellow. They have grey eye rings and brown irises. The feet are grey.

Young birds have a green nape. The back of the crown, chin, cheeks and the breast are also green. The under tail-coverts are yellowish-green with pink edging. They have dark irises.

Plum-crowned parrots are described as being skittish in the wild as well as in captivity.

This species is virtually nonexistent in aviculture. There is only one small, privately-held collection in the United States and the Loro Parque Fundación in Tenerife also has some specimens.

The majority of the plum-crowned parrots imported into the United States fell victim to aspergillosis - probably brought on by the stress experienced during the importation process.

The breeding season usually commences in November or December and the young fledge in February/March. During this time, the Plum-crowned Parrots are often seen in small groups and flocks - occasionally also larger gatherings. While foraging they are quiet and approachable. At other times, they are shy and alert. They are well camouflaged in the foliage.

Their call sounds similar to that of the Red-billed Pionus (Pionus seniloides). They are described as distinctive. When alarmed, they fly off loudly screeching. Those made in flight are smooth notes with a laughing quality, or harsher sounds. While perched, they emit nasal tones.

Pionus parrots are gentle in nature and make loving, devoted companions. Although with rare parrots, such as plum-crowns, it is preferred to place them into a well-managed breeding / conservation program to ensure their long-term survival. Once a significant number in captivity has been established, the young can be placed into pet bird situations.

Breeding has seldom been achieved. In the U.S. breeding begins in spring. This is an energetic bird that is considered medium-noisy. They are particularly vocal in morning. They are initially shy and flighty; when alarmed produces typical panting with fear. They are slow to become trusting.

Newly imported birds are extremely susceptible to diseases and frequent mortalities have resulted. They are particular prone to serious aspergillosis infections. Provided they are properly acclimatized, they are pretty hardy. Initially they should not be exposed to temperatures below 70°F (22°C). Once they have adjusted to the local climate, they may be able to endure temperatures as low as 50°F (10°C).

They often are intolerant of other birds, so keeping pairs in their flights would be the best way. To protect birds in adjoining cages, it is recommended to install double wiring. They are not hard chewers.

These parrots enjoy bathing and bathing opportunities should be provided to them daily.

The Pionus is of breeding age when they are about 3 to 5 years old. In North America, the breeding season stretches from February or March to June or July.

A clutch may consist of 3 to 5 eggs, which the female incubates for about 24 to 27 days. The chicks usually fledge when they are 8 to 12 weeks old. Pionus chicks are challenging to handraise and it is best to allow the parents to take care of the chicks for at least the first week. Various green foods and mealworms are appreciated by the parents for feeding the chicks. Corn cob is a favorite weaning food.