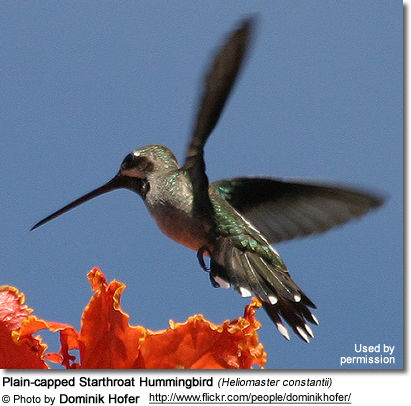 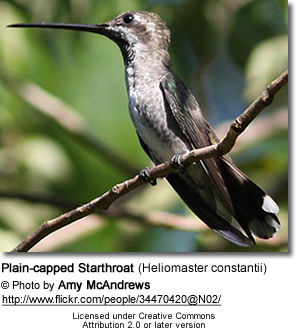 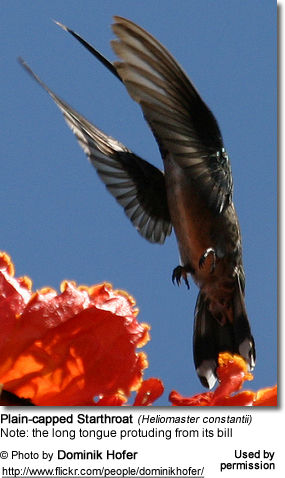 They are very rare visitors to the United States at the end of the breeding season (June through September). Specifically, they visit the south-easternmost Arizona, where they have been reported in the Madrean sky islands of the Sierra Madre ranges (Ash Canyon, Madera Canyon, Cave Creek Canyon, Coronado National Memorial and Patagonia) and the Agua Caliente Regional Park in Tucson. There are also reports of them visiting New Mexico. They are not present in the United States every year. 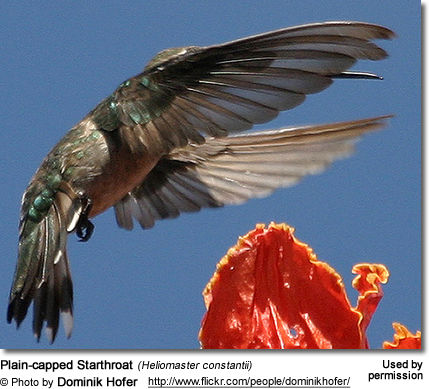 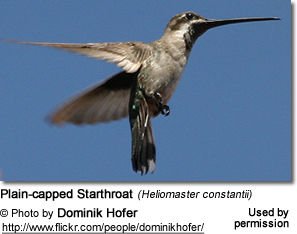 It has a very long, slender, black beak and a slightly notched bronze-green tail with white tips on the outer 3 to 4 pairs of feathers. The wings extend to the tail tip or beyond.

Adults have a dark, mostly metallic bronze upper plumage (crown, back and tail) with a white patch on the back and rump (lower back - above tail). The plumage below is greyish white. He has a metallic violet-red gorget (throat patch) that can look dull blackish in poor light conditions.

It has a dark eye-stripe with a white stripe above and below.

The female resembles the male, but has a slightly less colorful plumage.

Immature birds look like adults but no red on dark gray-brown throat, pale feather edgings on back and head

Plain-capped Starthroats typically nest from late winter through mid-summer in their breeding territory that stretches from western Mexico to southern Costa Rica.

Females build cup-shaped nest using plant fibers woven together and green moss on the outside for camouflage in a protected location in a shrub, bush or tree. The nests are lined with soft plant fibers, animal hair and feather down, and the structure is strengthened with spider webbing and other sticky material, giving it an elastic quality to allow it to stretch to double its size as the chicks grow and need more room. The nest is typically found on a low, thin horizontal branch.

The female protects and feeds the chicks with regurgitated food (mostly partially-digested insects since nectar is an insufficient source of protein for the growing chicks). She pushes the food down the chicks' throats with her long bill directly into their stomachs.

The chicks are brooded only the first week or two, and left alone even on cooler nights after about 12 days - probably due to the small nest size. The chicks leave the nest when they are about 20 days old.

The Plain-capped Starthroat Hummingbirds primarily feed on nectar taken from a variety of brightly colored, scented small flowers of trees, herbs, shrubs and epiphytes. They favor flowers with the highest sugar content (often red-colored and tubular-shaped) and seek out, and aggressively protect, those areas containing flowers with high energy nectar.They use their long, extendible, straw-like tongues to retrieve the nectar while hovering with their tails cocked upward as they are licking at the nectar up to 13 times per second. Sometimes they may be seen hanging on the flower while feeding. 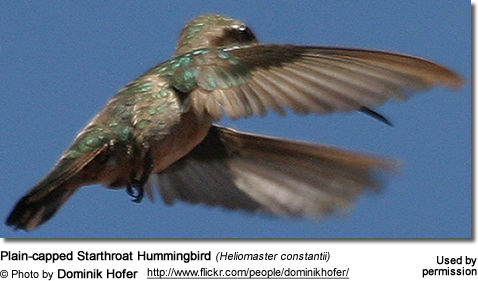