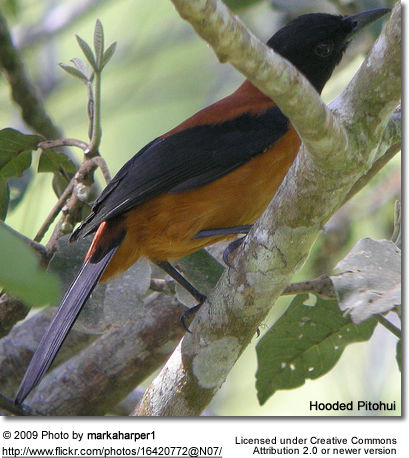 The Pitohui (pronounced like spitting: pittoeey) is one of New Guinea's most widely spread birds.

It is, in fact, the only known genus of poisonous bird in the world. At least three species of pitohui have a strong poison in their skin and feathers, the Hooded and Variable Pitohui being the deadliest of the three.

The skin and feathers of some pitohuis contain powerful neurotoxic alkaloids of the batrachotoxin group (also secreted by the Colombian poison dart frogs, genus Phyllobates). It is believed that these serve the birds as a chemical defense, either against ectoparasites or against visually guided predators such as snakes, raptors or humans. (Dumbacher, et al., 1992)

The birds probably do not produce batrachotoxin themselves. It is most likely that the toxins come from the Choresine genus of beetles, part of the bird's diet. (Dumbacher, et al., 2004)

The poisonous properties of this bird were not recorded until 1989. Jack Dumbacher, who was netting birds in New Guinea, caught a Hooded Pitohui and in untangling it from his net, got scratched and bit. But it was a small bird, and not a big threat, right? Wrong. Dumbacher put a cut finger in his mouth and his lips and tongue went numb. While that was the extent of his reaction, it caused a much more significant one in the scientific community.

Undoubtedly, there are other bird species that have chemical self-defense mechanisms to prevent predators from eating them, but to date, this is the only bird found to actually be poisonous to humans. Can you eat them? Yes! The natives of New Guinea do eat them, but warn they must be prepared very carefully, including skinning. Even gently simmering the skin in water will produce a toxic substance

Currently six species are classified in the genus, though current molecular genetics research suggests that significant reclassification of the Pachycephalidae may be needed.

Pitohuis are generally about 23 centimetres long with strong legs and a powerful beak. They are brightly feathered in red and black warning colors, much the same as the frogs. The Hooded appears to be the most dangerous, with the Variable being of medium toxicity and the Brown Pitohui the least harmful.

The Hooded Pitohui is brightly colored, with a brick red belly and a jet black head. The Variable Pitohui, as its name implies, exists in many different forms, and twenty subspecies with different plumage patterns have been named. Two of them, however, closely resemble the Hooded Pitohui.

It has been suggested that the birds' bright colours are an example of aposematism (warning colouration), and the similarity of the Hooded Pitohui and some forms of the Variable Pitohui might then be an example of Müllerian mimicry, in which dangerous species gain a mutual advantage by sharing colouration, so that an encounter with either species trains a predator to avoid both. (Dumbacher and Fleischer, 2001)