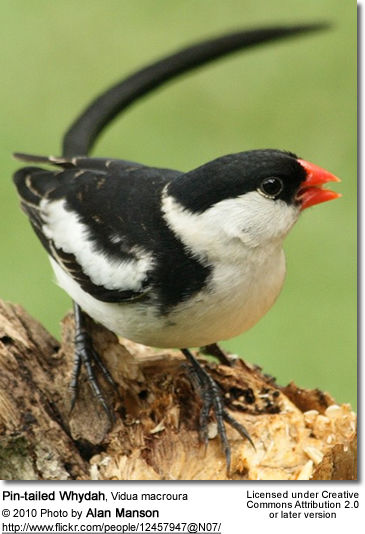 The Pin-tailed Whydah, Vidua macroura, is a small resident songbird that occurs in most of Africa south of the Sahara Desert; where it lives in light and densely wooded forests with Mopane trees; savanna grasslands where it breeds and feeds; and African bushveld.

The Pin-tailed Whydah is known in Afrikaans as Koningrooibekkie. They are also called "Widow Birds" in reference to the Male's long, mostly black tail during the breeding season.

The Pin-tailed Whydah typically averages 12-13 cm in length - except the male's tail grows an additional 20 cm during the breeding season. They weigh around 26 g.

The adult male has a black upper plumage and crown (top of the head) and a long black tail. The head (except for the crown) and plumage below are white. His wings are dark brown with white patches.

The female and non-breeding male have streaked brown upperparts, whitish underparts with buff flanks, and a buff and black face pattern. The non-breeding male lacks the long tail extension that he grows during the breeding season.

The eyes are brown; the beak is bright red; the throat is white and the legs are black.

Juvenile Pin-tails look like females, but their plumage is duller and they have a greyish bill.

The male Pin-tailed Whydah usually has several females. His elaborate courtship flight display consists of hovering over the female showing off his elongated his tail.

The Pin-tailed Whydah will generally lay 2 to 5 white eggs. The eggs of the Whydah and the finches are all white -- but the Whydah eggs are slightly larger than those of the host. The difference doesn't appear to be noticeable enough to the host, and they generally incubate the eggs and raise the young as their own. The whydahs chicks have the same gape pattern as the fledglings of the host species.

Even though Pintail Whydahs are not difficult birds to maintain in captivity, they are some challenges associated with that. First of all, they are quarrelsome and may be quite aggressive towards other birds. Also breeding is problematic, as they are parasitic breeders and are quite particular about where to place their eggs for fostering. As a general rule, it is best to keep them by themselves or with only a select few other bird types.

The Pin-tailed Whydah primarily forages on the ground for various seeds and grain. They will also feed on insects, such as butterflies, bees, wasps, locusts and ants.

its song consists of rapid squeaking and churring typically given from a high perch. 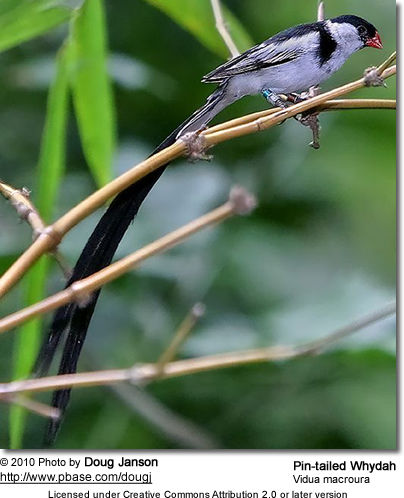