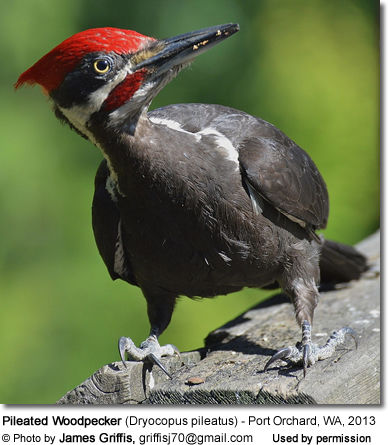 The Pileated Woodpeckers (Dryocopus pileatus) are very large North American woodpeckers that are roughly the size of crows. Within their range, they are the largest of all woodpeckers, except for the very rare and possibly except the possibly extinct Ivory-billed Woodpecker from the southeastern United States and Cuba.

Their legs are well adapted for climbing on vertical surfaces - where they are typically spotted. Occasionally they may be seen hopping on the ground or heard loudly drumming atop dead trees as they proclaim their territories. They will also drum on dead trees and fallen logs as they search for food.

They are resident (non-migratory).

The northern races tend to be larger in size than those occurring further south. Otherwise, they look alike. 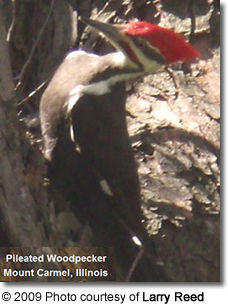 They are easily recognized by their black plumage, bright red crest and the white line that extends down the sides of the throat.

Adult males have a red line from the bill to the throat and they have red on the front of the crown - which are black in adult females.

In flight, white markings can be seen on the wings.

Similar Species (although both are very rare and possibly extinct):

The Pileated Woodpeckers feed on insects, such as beetle larvae and carpenter ant, as well as fruits berries and nuts. During the winter, when insects are difficult to find, they may take advantage of bird feeders.

These woodpeckers nest in large cavities of dead trees.

The average clutch consists of 4 eggs that are incubated for about 18 days. Both parents share the incubation duties and the raising of the young.

Build a nest box for the Pileated Woodpecker

Their noisy vocalizations are described as sounding like far-carrying laughter.