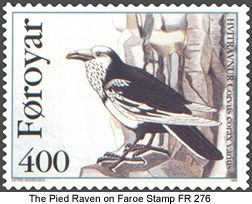 The Pied Raven (Corvus corax varius morpha leucophaeus) was a color morph (genetic mutation) of the North Atlantic subspecies of the Common Raven which was only found on the Faroe Islands and has disappeared since the mid-20th Century. It had large areas of white feathering, most frequently on the head, the wings and the belly, and its beak was light brown. Apart from that, it looked like the black birds (morpha typicus).

In Faroese, the bird was called hvítravnur ("White Raven"). Normal individuals of the subspecies varius, which is found on Iceland and the Faroe Islands, already show a tendency towards more extensive white feather bases compared with the nominate subspecies. But only on the Faroes, a mutation in the melanin metabolism could become fixed in the population, causing some birds to have about half of their feathers entirely white. While albinotic specimens sometimes occur in bird populations, the Pied Raven seems not to have been based on such occasional "sports", but on a constantly or at least regularly present part of the local raven population.

As these birds freely interacted and interbred with the black ones which are still found on the islands, they did not constitute a distinct subspecies. However, they illustrate two aspects of population genetics: genetic drift, which in small populations will shift allele frequencies over time (in this case, causing the occasionally-occurring mutation to spread and become a permanent part of the gene pool of ravens on the Faroes), and how a new, distinct subspecies may evolve over time from a distinct part of the population. Had the black and pied ravens mated preferentially with their own morph, in time the pied part of the population might have prevailed, as its coloration probably provided better camouflage when preying on seabirds (which themselves are commonly black and white).

The first record of the Pied Raven seems to be in the pre-1500 kvæði Fuglakvæði eldra ("The elder ballad of birds") which mentions 40 local species, including the Great Auk.

As exemplified by Skarvanesi's painting which obviously was done from stuffed birds, the Pied Raven was an object of interest to collectors. During the 19th century, the pied birds were selectively shot because they could fetch high prices; the sýslumaður (sherriff) of Streymoy, Hans Christopher Müller once payed 2 Danish rigsdaler for a stuffed specimen from Nólsoy. Such sums, a healthy amount of money for the impoverished Faroe farmers, made shooting a Pied Raven a profitable enterprise. Additionally, ravens in general were hunted as pests. In the mid-19th century, every Faroe male of hunting age was ordered by royal decree to shoot at least one raven or two other predatory birds per year or be fined 4 skilling. One of the last Pied Raven specimens was shot on November 2nd, 1902 on Mykines. In the autumn of 1916, another bird was seen at Velbastaður and on Koltur. The last known individual was found in the winter of 1947 on Nólsoy, and disappeared late in 1948. As these last sightings raised widespread interest, it seems probable that after 1948, no Pied Raven has been found anymore.

The Pied Raven being merely a color variation, it only differed in one or very few alleles (as opposed to numerous genes in a true subspecies) from the black birds. The "piebald" allele(s) was or were recessive or (if more than one) only caused the novel coloration if they all were present. This is evidenced by the last sightings which occurred in the absence of a regular breeding population of piebald birds, and the observations of H. C. Müller (Droste, 1869). Thus, it is not certain that the form is indeed extinct, if one can speak of "extinction" in any but a population genetical sense anyway. Theoretically, the allele(s) could still be present but hidden in black individuals of the subspecies and thus, a Pied Raven could once again be born one day. As the raven population on the Faroes has declined to a few hundred birds at best over the recent decades, this does not seem very likely.